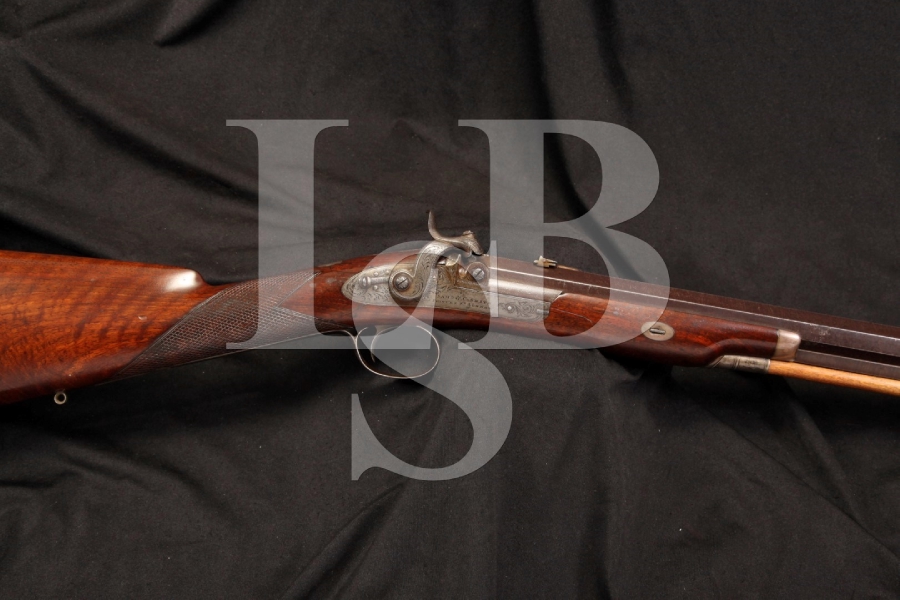 SOLD FOR: $2,005
Make: Samuel & Charles Smith, Princes St., London
Model: Large Bore Percussion Rifle
Serial Number: 4346
Year of Manufacture: 1850 – 1870 (Post Flintlock and before the move to Oxended St.)
Caliber: .70 Caliber Percussion
Action Type: Single Shot Percussion Black Powder Muzzle Loader
Markings: The top of the barrel is marked “SamL & C. Smith Princes Street Leicester Square London”. The underside of the barrel is marked with a Crown over “V”, a crown over “GP” and “4346”. There are four inlaid bands at the breech which appear to be White Gold. The right lock plate is marked “SamL & C. Smith / Princes St London”. The top of the barrel channel is marked “4346”. The top tang of the buttplate is marked “4346”. The stock and frame hardware is beautifully and delicately hand engraved, with the hammer beautifully engraved as a fish.
Barrel Length: About 23 ¾”
Sights / Optics: The front sight is a dovetail set blade and the rear sight is three position leaf sight, dovetail set in the barrel and with a very artful front point.
Stock Configuration & Condition: The stock is the original piece, numbered to the gun that has been very nicely repaired and refinished. The wood to metal fit is excellent everywhere but at the buttplate, where the plate is generally proud of the metal. There is a crack completely around the wrist at the rear of the lock plates. This was soundly repaired, though the crack is still evident. There is one instance of wood filler on the left forward comb. The checkering is still pronounced, though it is a flatter cut checkering. The grain is beautiful and the finish is appropriate. There is slight darkening around the metal. There are several rubs and dings throughout, though few of these are since the refinish and those that are recently incurred are light. There is another hairline crack on the right side of the stock ahead of the lock plate. The LOP measures 14″ from the front of the trigger to the back of the steel buttplate, showing only light erosion, little finish and the same style and quality of engraving as the balance of the rifle. The stock rates in about Very Good overall condition (it would rate considerably better without the repair.)
Type of Finish: Damascus, Blue & Case Color
Finish Originality: Factory original but for areas of the wood.
Bore Condition: The bore is bright and the rifling is pronounced and undamaged. There is no erosion. You could not expect a better bore for a rifle of this caliber and age.
Overall Condition: This rifle retains about 10% of its metal finish. The balance of the finish shows thinned blue on the trigger guard and lower tang. The case coloring on the frame has completely muted, though there is no evidence of cleaning or erosion as the engraving is sharp and metal is smooth. There is a darker but still light patina on the barrel, with a beautiful and visible Damascus scene. The edges have thinned a bit towards white and there are a couple of light dings. Even the rings have a beautiful Damascus scene. The screw heads are lightly marked. The markings are clear. Overall, this rifle rates in about Fine condition.
Mechanics: The action functions correctly, with a very light trigger pull. We have not fired this rifle and we cannot get the hammer lock to engage the hammer. Dried oil may have seized it in place, and it appears the hammer at full cock is too far back to catch the lock.
Box, Paperwork & Accessories: None
Our Assessment: This is a beautiful large bore rifle manufactured by a very notable and extremely talented gun maker. This rifle has a lot of condition, surprisingly good engraving and a striking Damascus scene. All of the numbers match on this rifle and the only thing that we can point out detracting from this beauty is the repair to the stock. This was a very large game, and very large bore single projectile rifle from the 1850s.

Here is a bit of history on the company.

William Smith was apprenticed to a John Joyner in 1766, and then turned over to a William Shepherd in 1771.

In 1805 (some reports say 1801 but this has not been confirmed) he established a business at 34 Tottenham Court Road and traded as a gun maker.

In 1817 he was appointed Gunmaker-in-Ordinary to the Prince Regent and moved to 59 Princes Street, Leicester Square.

In 1820 when the Prince Regent became King George IV he was appointed Gunmaker-in-Ordinary and the following year moved to 64 Princes Street. By this time he had been appointed Gunmaker to the Emperor of Russia and the King of Bavaria.

Samuel patented a percussion cap and nipple, the “Imperial,” in 1830 (No. 5978). This cap was larger than normal and the firm provided interchangeable hammer noses to fit the different sizes.

In 1831 Samuel submitted a percussion musket to the Board of Ordnance but it was rejected.

Between 1835 and 1837 they were appointed Gun Makers to His Majesty (William IV) and also to the Duke of Gloucester.

The firm continued to make flintlock guns until about 1850.

Presumably Charles had pre-deceased him, because Samuel’s two sons, also Samuel and Charles, took over the firm.

In 1870 the firm moved to 18 Oxenden Street, Haymarket, Samuel and Charles occupied these premises until 1875 when the firm closed down and they appear to have emigrated to Australia.