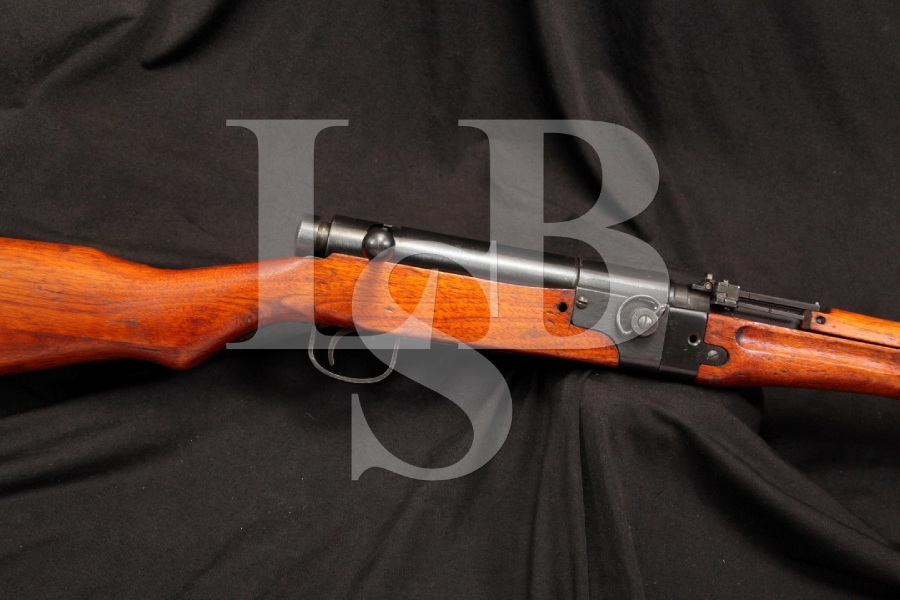 SOLD FOR: $3,874
Make: Nagoya Arsenal, Japan
Model: Type II “Paratrooper” (Based on the Arisaka Type 99)
Serial Number: 4528
Year of Manufacture: 1942 – 1944
Caliber: 7.7X58mm (7.7 Jap)
Action Type: Bolt Action with Internal Magazine
Markings: There is no visible import mark. The top of the receiver is marked with the Imperial Chrysanthemum and with two Japanese characters for “Type II”. The left side of the receiver is marked with the serial number “4528”, the assembly number “197” and the Japanese symbol for the Nagoya Arsenal. The left side of the barrel next to the receiver, both halves of the metal joining area and the takedown knob on the right are all marked with the matching assembly number “197”. The rear underside of the barrel, the underside of the bayonet lug, bottom of the bolt handle, rear of the extractor, underside of the safety knob, the firing pin and the rear of the dust cover are all marked “528”, the last three digits of the serial number. There is decorative metalwork on the safety knob. The bottom of the butt is marked with a Nagoya Arsenal stamping. There are small unknown marks on the top of the bolt release lever, top of the cleaning rod, rear of the safety and on the left side of the receiver.
Barrel Length: Approximately 25 ½”
Sights / Optics: The front sight is an inverted “V” post set between two protective ears. The rear sight is an aperture assembly that flips up to become a sliding sight elevator marked from “3-15”. The sides fold out to be used as anti-aircraft sights. They are marked “2” in the middle and “3” on the ends. There is an inverted “V” notch below the “2” on each side.
Stock Configuration & Condition: The three piece stock has a pistol grip, finger grooves, metal cleaning rod, nose cap with bayonet lug, barrel band with sling loop, metal buttplate, and a sling loop on the left of the butt with a finger groove above it. There is a metal joining mechanism below the receiver and barrel shank. It wraps around the stock and has a “D” ring takedown knob on the right side. There are scrapes, scratches and compression marks throughout. There is a small hole drilled into the wood in front of the bottom metal. There are deep compression marks and scratches under the receiver on the left. The LOP measures 12 ¾” from the front of the trigger to the back of the buttplate. The stock rates in about Very Good overall condition.
Type of Finish: Blue
Finish Originality: Original
Bore Condition: The bore is bright and the rifling is worn. There is no erosion.
Overall Condition: This rifle retains about 90% of its metal finish. The joining metal shows wear and scratches. The dust cover and top of the receiver show light scrapes and scratches. The barrel shows scratches on the front. The buttplate is worn and scratched. The nose cap, front sight band and bottom of the magazine show wear and light scratches. The screw heads show use. The markings are deep. Overall, this rifle rates in about Very Good Plus condition.
Mechanics: The action functions correctly. We have not fired this rifle.
Box, Paperwork& Accessories: None
Our Assessment: This Japanese Type II Paratrooper is a takedown rifle made during WWII. Luckily this one still has its Imperial Chrysanthemum and lots of matching numbers. This rifle looks great with deep crisp markings. This one has a cleaning rod, intact anti-aircraft sights and a dust cover that is marked with a matching number. To take the rifle apart you turn the takedown knob counter clockwise and pull out the retainer; then pull the rifle apart. For more information on these rifles as well as photos of another Type II Paratrooper in two pieces please see: http://members.shaw.ca/nambuworld/type2paratrooppix.htm . From www.surplusrifle.com: “Many of chrysanthemum markings were ground off the rifles by surrendering Japanese troops because it was considered a disgrace to hand over a rifle was considered the property of the Emperor. An unconfirmed tale has it that General Douglas MacArthur at war’s end also ordered the chrysanthemum markings removed from scores of captured Japanese rifles as part of the process of de-deifying the Emperor.”