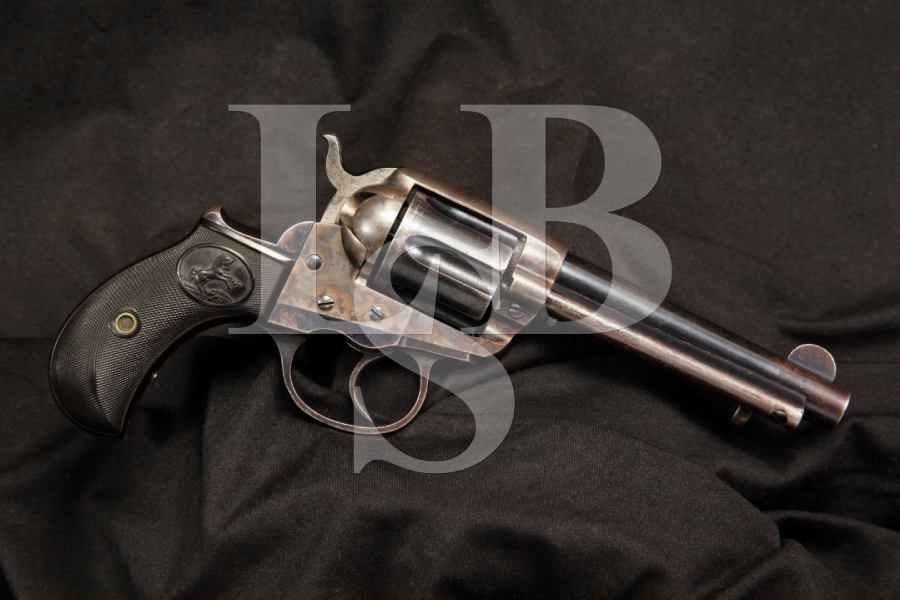 SOLD FOR: $1,805
Make: Colt
Model: 1877 Thunderer
Serial Number: 137199
Year of Manufacture: 1902
Caliber: .41 Long Colt
Action Type: Single and Double Action Revolver with Side Loading Gate 6-Round Cylinder
Markings: The left side of the barrel is marked “COLT. D. A. 41”. The top of the barrel is marked “Colt’s Pt. F. A. Mfg. Co. Hartford, CT. U.S.A.” The left side of the frame is marked “Pat. Sept. 19, 1871 / 5, 74. / “JAN. 19, 75.” With ditto marks for Patent and September, and with a circled Rampant Colt logo. The underside of the frame at the grip frame, the grip frame just behind it and the underside of the backstrap are marked “137199”. The inside rear face of the loading gate is marked with the assembly number “983”.
Barrel Length: 4 ½”
Sights / Optics: The front sight is tall thin half-round blade fixed to the barrel. The rear sight is a “V” groove in the top strap.
Stock Configuration & Condition: The grips are checkered black hard rubber on the birds head grip frame, with a Rampant Colt in an oval at the top of grips. The checkering shows even moderate wear with the checkering worn smooth at the bottom shoulder on both grips. There is also a mar in the checking just above the grip screw on the right grip. Otherwise, the grips are only a very few minor handling marks. The grips are in about Very Good to Fine condition.
Type of Finish: The finish on the frame is case colored and the finish on the rest of the gun is blued.
Finish Originality: The finish is original and the case coloring on the right side of the frame and fire blue on the back of the hammer are still vivid.
Bore Condition: The bore is bright and the rifling is deep with very slight wear. There is scattered light erosion in the grooves in the front half of the barrel.
Overall Condition: This revolver retains about 70% of its metal finish. The barrel shows thinning along its left side and handling marks, with scratches and compression marks through the finish on the underside by the cylinder pin. There is also frosting near the front of the barrel on the left side and the back edges of the front sight show tiny compression marks. The ejector rod housing shows thinning, handling marks and small compression marks, and an area of pinprick surface erosion on the top near the frame. The frame, trigger guard, cylinder latch, front strap, backstrap and cylinder all show scattered pinprick surface erosion which is heaviest on the cylinder and the left side of the frame. The sides of the hammer show frosting. The trigger guard also shows thinning on its edges and handling marks on its sides below the frame. The bottom of the trigger guard shows handling marks through the finish and thinning. The front strap and backstrap are both developing a brown patina. The cylinder shows thinning on its front edge and on the edges around its flutes, with a wide band of thinning at the rear. The hammer checkering shows very light wear. The screw heads are sharp. The markings are clear. Overall, this revolver rates in about Very Good to Fine condition.
Mechanics: The action functions normally in single action except that the trigger pull is a little stiff at 7 ½ lbs. The double action pull is relatively smooth. The cylinder lock-up is SOLID on all six chambers. We did not fire this revolver.
Box, Paperwork & Accessories: None
Our Assessment: From Wikipedia: “The Colt M1877 was a double action revolver manufactured by Colt’s Patent Fire Arms from January 1877 to 1909 for a total of 166,849 revolvers. The Model 1877 was offered in three calibers, which lent them three unofficial names: the “Lightning”, the “Thunderer”, and the “Rainmaker”. The principal difference between the models was the cartridge in which they were chambered: the “Lightning” being chambered in .38 Long Colt; the “Thunderer” in 41 Colt. An earlier model in .32 Colt known as the “Rainmaker” was offered in 1877. The M1877 was designed by one of the inventors of the M1873 Colt Single Action Army, William Mason, as Colt’s first attempt at manufacturing a double-action revolver and was also the first successful US-made double-action cartridge revolver. Neither “Lightning” nor “Thunderer” were Colt designations, nor used by the factory in any reference materials. Both terms were coined by Benjamin Kittredge, one of Colt’s major distributors, who was also responsible for the term “Peacemaker” for the Single Action Army. Old West Outlaw John Wesley Hardin frequently used both “Lightning” and “Thunderer” versions of the Colt 1877 revolver, and the Thunderer was a favorite of Billy The Kid.” This revolver is in Very Good to Fine condition for being over 100 years old, with about 70% of its finish remaining. The finish shows thinning on the left side of the barrel and pinprick surface erosion which is heaviest on the cylinder and the left side of the frame. The bore has deep rifling with very light erosion in the grooves towards the muzzle. This pistol will make a nice addition to a Colt collection or collection of antique double action revolvers. It isn’t in perfect condition, but not many are considering all are over a century old.