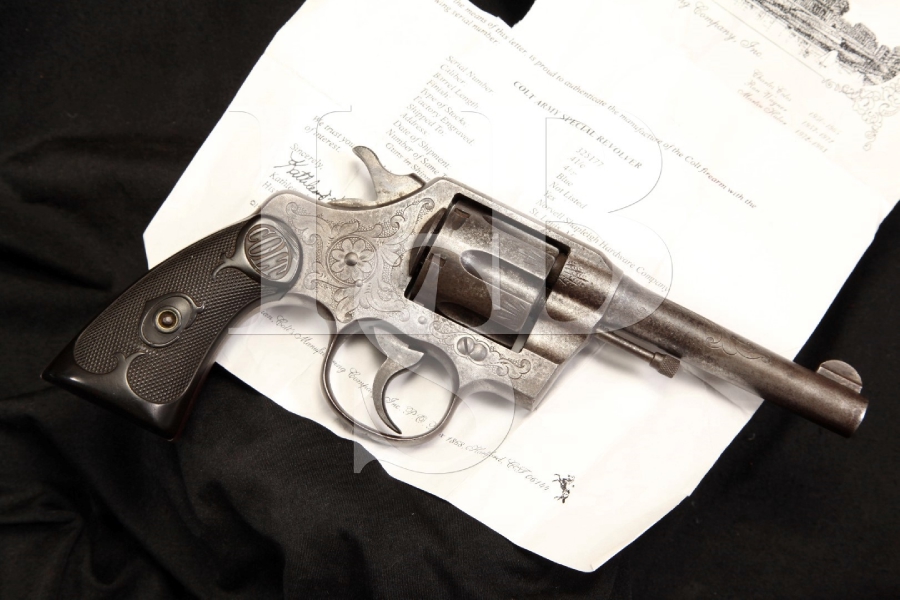 SOLD FOR: $2,555
Make: Colt
Model: Army Special
Serial Number: 325177
Year of Manufacture: 1910
Caliber: .41 Colt
Action Type: Single and Double Action with Swing-Out Cylinder
Markings: The left side of the barrel is marked “COLT”, “ARMY / SPECIAL” and “41”. The left side of the frame is marked with the Rampant Colt logo. The top of the barrel is marked “Colt’s PT. F.A. Mfg. Co. Hartford, CT. U.S.A. / Pat’d. Aug. 5, 1884 June 5, 1900 July 4, 1905”. The crane cut is marked “325177” and “E”. The crane is also marked “325177”. The front left of the trigger guard is marked with a “VP” in a triangle, and the rear with a “3”. All of the exposed metal parts except the front strap and the sides of the hammer and trigger are hand scroll engraved, corresponding to Colt’s Type A engraving. Please see our pictures!
Barrel Length: 4 ½”
Sights / Optics: The revolver is mounted with a “U” groove in the top strap for a rear sight. The front sight is a half round tall thin blade fixed to the barrel.
Stock Configuration & Condition: The grips are checkered black hard rubber with “Colt” marked at the top of each grip in an oval and a script “C” around the brass grip screw escutcheon. The grips show minor handling marks with compression marks in the bottom of the right grip. The checkering shows light wear with a mar in the right grip just below the script “C” and three or four small mars in the left grip, two of which are in front of the script “C”. The grip screw is badly disfigured, and may be unserviceable. The grips rate in about Very Good to Fine overall condition.
Type of Finish: Blue
Finish Originality: All Original
Bore Condition: The bore is bright and the rifling is shallow. There is light erosion in the flats and the grooves in the front half of the barrel.
Overall Condition: This revolver retains about 25% of its metal finish, with thinned areas developing a brown patina. There is surface loss, thinning and surface frosting on all surfaces with pitting on the barrel and frame in front of the cylinder and on the sides of the top strap. The pivot on the crane shows erosion, and there are spots of pitting and erosion on the cylinder and erosion in the bolt stop cuts. The cylinder has a very light drag line. The hammer checkering shows light wear, the knurling on the cylinder latch is slightly distressed and ejector rod knurling is sharp. The screw head above the front of the trigger guard on the right side is disfigured. The markings are clear. Overall, this revolver rates in about Good to Very Good condition.
Mechanics: The cylinder lockup on this revolver is SOLID on all six chambers. The double action trigger pull is VERY smooth, and the single action crisp. The action functions correctly. We did not fire this revolver.
Box, Paperwork & Accessories: This revolver comes with a letter from Colt indicating this revolver was shipped on Jan. 28, 1910 with a blued factory engraved finish. The letter has been folded repeatedly, and is stained with the name and address of the addressee cut out of the letter. It is in about Good condition.
Our Assessment: The Colt Army Special was introduced with the Army in mind, and quickly came to be noted for its accuracy, winning the National Revolver Match in 1911 and establishing a new range record at Camp Perry the same year. Unfortunately, Colt was never able to interest the Army in a medium framed revolver, and changed its name (with no other changes) to the “Official Police” in 1928 after they found that the New York Police Department, among others, were willing to adopt the revolver. The .41 Colt cartridge uses a soft lead hollow base bullet with a .386” diameter while the bore of the revolver is about .400”, and still yields acceptable though not outstanding accuracy. Elmer Keith wrote in his book “Sixguns” that the “41 L. C. was a better fight-stopper than its paper ballistics would indicate” and that it was “better for self-defense than any .38 Special load made”. This revolver is in Good to Very Good condition with surface loss and/or thinning on most surfaces and a few spots of pitting and erosion. The bore is bright with light erosion and the cylinder lock-up is solid – better than most new revolvers out of the box. This factory engraved revolver, with confirming letter from Colt, will make a good choice for those who want to get started collecting old Colts or for a collector wishing to fill-out his collection. As indicated by Elmer Keith, it will also be good for home protection, but if you decide to shoot this revolver you will probably have to load your own cartridges or buy them from Ten-X.