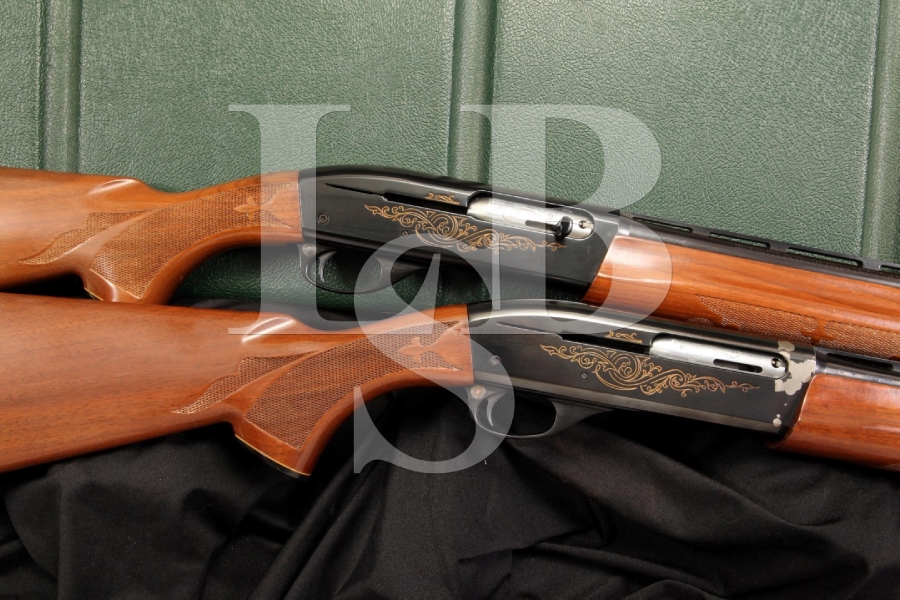 28 Ga.: There are five Remington inspection marks on the right side of the chamber, followed by “REMINGTON ARMS CO. INC. ILION. N.Y. MADE IN U.S.A. / PATENT NOS 2.645.873 – 2.675.638 – 2.719.375 – 3.200.710 – 3.201.886”. The frame is nicely engraved, with “Remington Model 1100”, “Matched Pair / No. 3824” and the serial number on the left side. The left side of the barrel is marked “28 GA. FOR 2 3/4 IN. OR SHORTER SHELLS / SKEET / 6 L T L”.
Barrel Length: About 24 ½”
Choke: Both are choked Skeet
Sights / Optics: These shotguns are mounted with full length ventilated ribs, mid-rib steel beads and white insert front beads at the muzzles.
Stock Configuration & Condition: The stocks are press checkered and varnished wood, with plastic black and white line spacer butt plates. There are pistol grip caps on both guns, matching the buttplate with black caps and white line spacers. The 28 gauge has remarkable little wear, with just a bit of marking, almost no wear through the finish and one surface scratch on the left side of the forearm at about the center. The .410 bore shows more wear on the left side of the stock, at the belly and on the wrist. There are a few dings and marks, with some of the scratches protruding through the finish. The finish on the gun has dulled a bit, apparently from more frequent handling. The LOP measures 13 ¾” on both guns, from the front of the trigger to the back of the Remington plates, which rate in Fine condition and only show scattered marking. The stocks rate in about Excellent and Very Good to Fine overall condition.
Type of Finish: Blue
Finish Originality: Factory Original
Bore Condition: The bores are bright with just a bit of wad fouling that should clean. There is no erosion.
Overall Condition (.410): This shotgun retains about 90% of its metal finish. The balance of the finish shows some chemical bluing loss on the right side of the frame at the ejection port. This finish loss has not etched the metal, and was clearly from an accidental use of the wrong solvent . . . The barrel has little wear, though there are a few freckles over the finish ahead of the forearm. There is a tiny mark on the right side of the trigger guard, at the edge. The screw heads are barely worn but show a bit of rust around the butt plate screws. The markings are crisp, many are filled with gold. Overall, this shotgun rates in about Very Good to Fine condition. This gun is missing the bolt hand, which can be easily replaced with the one off the 28 gauge or purchased from Brownells here: http://www.brownells.com/shotgun-parts/bolt-parts/operating-handles/operating-handle-prod10901.aspx for $12.99.
Overall Condition (28 Ga.) : This shotgun retains about 98% of its metal finish. The balance of the finish shows only a few marks on the bolt (internally). There is no freckling on this gun as there is on the .410 and it is clear that the .410 was used far more than the 28 gauge. There is a tiny rub on the top of the frame, apparently from storage in the Remington hard case. There is no other mentionable wear that we can find on this gun. The screw heads are sharp. The markings are crisp. Overall, this shotgun rates in about Excellent condition.
Mechanics: The actions function correctly, the only issue is the missing bolt handle on the .410 which is easily replaced with a factory part here (http://www.brownells.com/shotgun-parts/bolt-parts/operating-handles/operating-handle-prod10901.aspx) or can be borrowed from the 28 gauge. We have not fired these shotguns.
Box, Paperwork & Accessories: Both guns come in a green hard case with foam interior. This is not a fitted case, but does hold both shotguns well without taking them down. This case was the case the guns were originally sold in and can be seen photographed here: http://www.remingtonsociety.com/rsa/journals/1100. The case is dusty and shows many scuffs, but is otherwise sound and rates in about Very Good overall condition.
Our Assessment: This is a rare combination of guns, in fact both guns on their own could be considered rare, but even rarer together as a Factory matched pair. From (http://www.remingtonsociety.com/rsa/journals/1100): Prior to 1969, the Model 1100 was available only in 12, 16 and 20 gauges. Beginning this year, Remington began making .410 and 28 gauge versions. Initially they were only available as Model 1100 Matched Pairs – a .410 shotgun and a 28 gauge shotgun in Field and Skeet versions. Both plain and vent rib barrels were available. The Field gun came with mahogany stock and fore-end, and Skeet guns came in American walnut. The .410 and 28 gauge guns were offered only as a matched pair with matching serial numbers gilded in gold, and protected in a hard carrying case. They retailed for $495.00 for the pair. A total of 5,067 Matched Pairs were sold in 1969 and 1970 with run-off sales of left-over stock in 1971 and ’72. Later in the year, Remington began offering the Model 1100 in .410 with full choke for $199.95 and in 28 gauge with modified choke for the same price. Stocks and fore-ends were made of lightweight mahogany, and either gauge was available with plain or vent rib barrel.”

This pair is number 3824 of 5067 and whether you are a serious skeet shooter or a serious Remington collector, these guns would be tough to improve on and are a must for your collection. Most of these were purchased by shooters, and thus were shot. While the .410 here has seen some field time, the 28 gauge likely has not. Both guns retain a large percentage of their original finish, come in the original case and are in the two most desirable gauges shotguns have ever been chambered in (at least for skeet shooting). We are skeet shooters here, preferring the Browning Citori’s, but even we are excited by this pair and believe it would be near impossible to improve on.