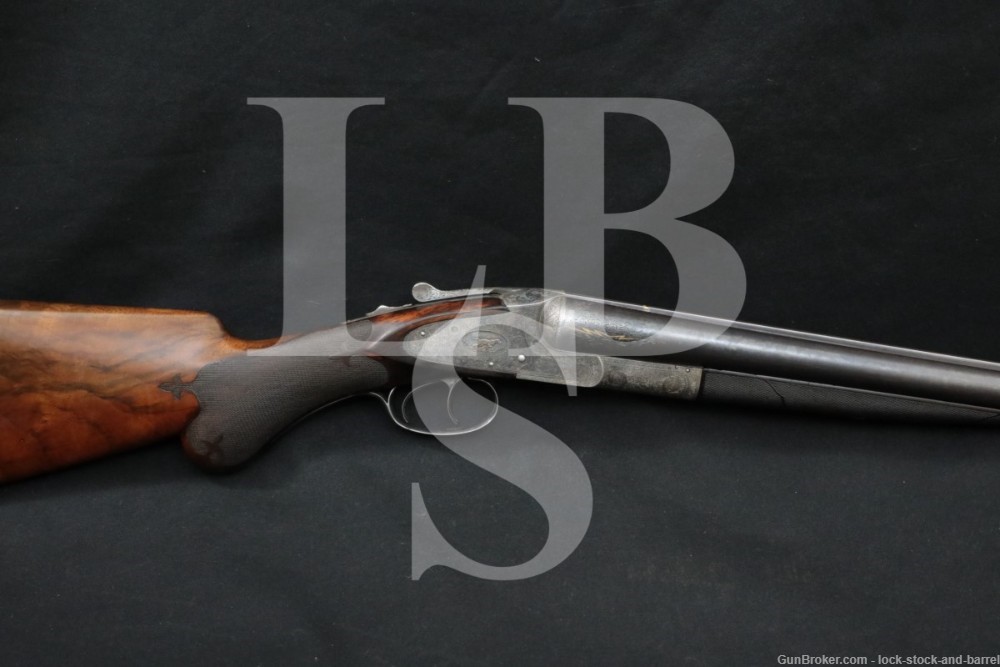 Markings: The top of the right barrel is marked “SIR JOSEPH WHITWORTH FLUID COMPRESSED STEEL”, the top of the left “MADE TO ORDER BY THE HUNTER ARMS Co. INC. FULTON. N.Y.”. The top of the rib at the rear is marked “L.C. SMITH Premier GRADE”. The bottom of each barrel has a trademark. The left flat is marked “R.E. 42580”. The inside of the forend iron is marked “EJECTOR / PAT’D / R.E. 42580 / MAY.28.1901.” and has decorative engraving. The water table is marked “PATD”, “JULY.13.86 / OCT. 5. 86” and “R.E.42580 / P”. Each sideplate has a small banner marked “L.C. SMITH”, a relief engraved hunting dog scene in oval and full coverage scroll engraving. The receiver has foliate relief engraving on the fences with full coverage rose and scroll engraving. The engraving motif continues on the guard and trigger plate, the trigger plate also has a hunting dog scene. There is engraving at the muzzle and breech ends of the barrels and at the top-rear of the rib, the rib has an inlaid gold line between the engraving and checkering. Each barrel on the side at the rear has a gold inlaid lightning bolt.

Sights / Optics: There is a brass bead on the rib near the muzzle. The rib is finely checkered to reduce glare.

Stock Configuration & Condition: The stocks are checkered walnut with splinter forend, semi-pistol grip, monte carlo comb and a ventilated orange rubber recoil pad with strip of leather on the back. The grip’s checkering has fleur de lis accents. The forend has decorative bordering in its checkering and is inlet at the front for a horn tip. The tip is included, but has come free from the forend. The forend has a few scattered nicks and scratches, most notable is a nick in the top-left edge at the rear. There is a tiny grain-line crack at the point of the inlet for the tip. The forend checkering shows light handling wear but is well defined. The buttstock appears to have seen some minor sanding and a new finish applied, most notable at the top-rear of the checkering where the borders are soft. The wrist has some dark discoloration from age and handling. The buttstock has some scattered light nicks, scuffs and scratches. There are a few more notable dings on the left in and behind the grip, on the front of the grip behind the bottom tang, and a more notable scratch in the left grip checkering toward the rear. There is a tiny loss at the top-front of the wrist next to the lever. The LOP measures 15 1/8” from the front of the forward trigger and 14 1/8” from the front of the rear trigger to the back of the recoil pad, 14 1/8″ and 13 1/8″ to the back of the wood. The drop at the front of the comb is 1 3/4″, drop at the rear of the comb 2 3/8″ and the drop at heel is 3″. The cast is about neutral. The pad has hardened with age and shows scattered wear and discoloration. Overall, once the forend tip has been properly re-installed the stocks will be in about Very Good condition.

Overall Condition: This shotgun retains about 65% of its metal finish. The finish is thinning at all edges. The barrels have scattered light finish wear, some very minor surface oxidation and some light nicks and scratches. The receiver’s case color has mostly muted in the exposed areas with some areas still showing fairly good color, mostly in the sideplates. The guard has handling wear and some light scratches. The screw heads are lightly tool marked with strong slots. The markings are generally clear, the serial marking on the barrel flat appears to have been applied prior to final polish. Overall, this shotgun is in about Very Good condition.

Mechanics: The action functions correctly including ejectors. The safety is three-position with the center position safe. The front position will automatically return to safe when the action is opened, the rear position will return to safe only manually. The barrels lock up with no play to the frame. We have not fired this shotgun. As with all used firearms, a thorough cleaning may be necessary to meet your maintenance standards.

Our Assessment: The history of the L.C. Smith firearms is quite interesting. L. C. Smith formed a partnership with L. H. Smith and W.H. Baker to manufacture a three-barrel gun in 1879. L. C. Smith took over the company in 1880 and in 1884 began manufacturing hammer shotguns. Smith became interested in a new-fangled invention called the typewriter, and sold the company in 1888 to John Hunter. Smith went on to form the Smith-Corona company and became a world leader in the manufacture of typewriters. The L. C. Smith shotguns manufactured by Hunter Arms went on to become some of the highest quality shotguns made in the United States. This is one of the rarest configurations, the Premier Grade. Between 1919 and 1931 only twenty-six Premier Grades were produced with one more assembled in 1940 for a total production of only twenty-seven guns. Of those twenty-seven, only five were made with 30″ barrels and only four of those were chambered for 12 gauge shells as this gun is. The gun is in quite good shape considering its age and use, appearing to have seen some time in the field over the last century. It retains about 65% of its original metal finish, nice bores and strong mechanics. Its Premier Grade engraving is drop-dead gorgeous, and this gun is of the earlier style with no gold on its hunting dog scenes, but having gold lightning bolts on the sides of the barrels, giving it a striking appearance. With so few of the Premier Grades made, this will add to even very advanced L.C. Smith collections. Don’t miss this rare opportunity! Please see our photos and good luck!