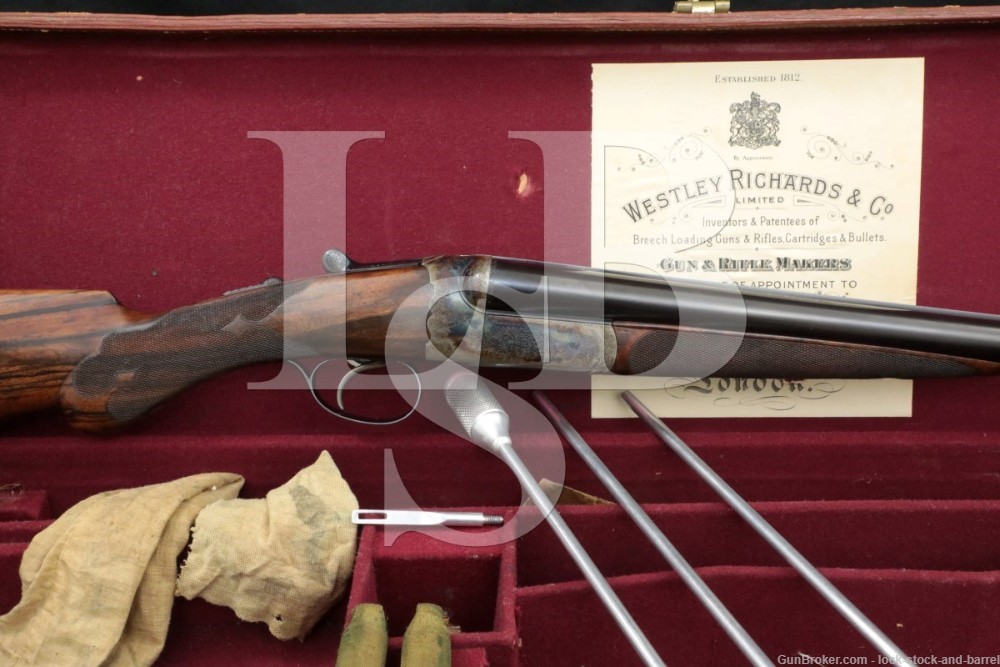 Sights / Optics: There is a white bead mounted to the front of the rib with a smaller white mid-bead.

Stock Configuration & Condition: The stocks are two-piece checkered select walnut with horn-tipped splinter forend, semi-pistol grip, straight comb, silver initial plate in the belly and a Jostam rubber and foam recoil pad. The forend has a few light nicks, most notable on and around the horn tip. There are some compressed checkers along the bottom-left of the forend, most toward the rear. Otherwise, the forend checkering is well defined. The buttstock has scattered light nicks and scratches, most and most notable behind the grip. There is an open grain-line at a knot on the left of the wrist toward the bottom-front. The grip checkering has a few scattered compressed checkers, but is generally well defined. There are no chips or cracks. The LOP measures 14 1/2″ from the front of the trigger to the back of the recoil pad, 13 1/4″ to the back of the wood. The pad shows light wear and discoloration and has hardened slightly with age. Drop at comb is approximately 1 1/2″, drop at heel 2 1/2″. The cast is about neutral. Overall, the stocks are in Very Good-plus condition.

Bore Condition: The right bore is bright. The left bore is mostly bright with a patch of stubborn fouling in the bottom just in front of the forcing cone.

Overall Condition: This shotgun retains about 90% of its metal finish. The finish is thinning at some edges. Most of the balance is in light handling wear on the sides of the barrels over the forend, light wear on the tops of the barrels over the front of the forend, and some scattered minor nicks and scratches forward of the forend. The receiver retains strong case color, though there is some muting and handling wear in the case color of the forend latch assembly. The lock plate retains strong blue finish. The guard and controls have light handling wear. The action shows light operational wear. The internal parts have some stubborn dried grease. The screw heads are tool marked with strong slots. The markings are clear. Overall, this gun rates in about Fine condition.

Mechanics: The action functions correctly including ejectors. The barrels lock up to the receiver with no play. The safety engages automatically when the lever is pressed. We did not fire this shotgun. As with all used firearms, a thorough cleaning may be necessary to meet your maintenance standards.

Box, Paperwork & Accessories: This shotgun comes in an English-fit leather-bound case with brass corner bolsters, brass locking latch (no key included) and the interior has red fabric lining in various compartments for the barrel assembly, stocked receiver, forend and the included cleaning accessories. The inside of the lid has a Westley Richards label. The case has scattered wear, mostly along edges and on raised features. The most notable damage is that one end of the carry handle has torn free from the case body and one of the strap loops on the left strap has broken.

Our Assessment: This is an exceptionally smart early 1900’s Westley Richards side by side shotgun. Few makers are ever compared to Westley Richards – though Parker, Webley & Scott, Purdey and Merkel are among them. The shotgun itself is in great condition with light wear consistent with use in the field. It retains nice bores and strong mechanics. The Droplock is an interesting system, allowing the removal of the locks by hand, with no tools by simply opening up the lock plate and pulling the locks out. This gave it even greater ease of maintenance and cleaning than traditional sidelock guns. There is much life left in this shotgun and it will enhance any collection. Please see our photos and good luck!