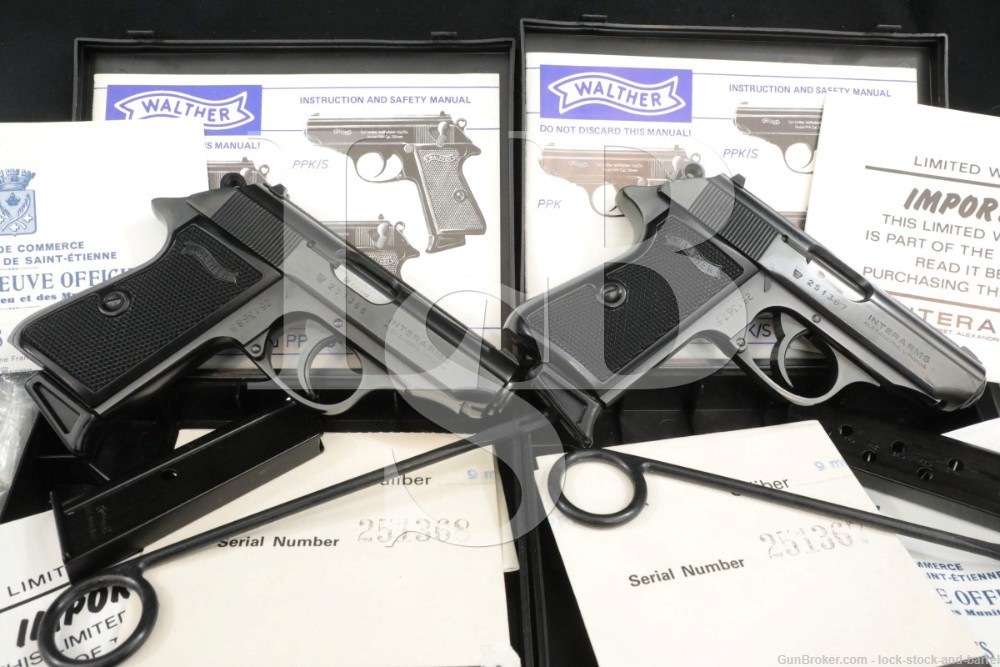 Make: Walther; Mfg. by Manurhin in France, Imported by Interarms

Sights/Optics (Both): The front sight is a short blade with a white dot recess. The rear sight is a square notch leaf with a white square aim guide that is dovetailed to the slide. There is a full length rib with wavy serrations for glare reduction.

Stock Configuration and Condition (Both): The grips are two-piece checkered black synthetic panels. The grips show no apparent wear with nice, sharp checkering. There are no chips or cracks. Overall, the grips rate in about Excellent condition.

Type of Finish (Both): Blued

Bore Condition (Both): The bores are bright and the rifling is pronounced. There is no erosion in either bore but there is some light fouling.

Overall Condition (DJ24): This pistol retains about 99% of its metal finish. There are a few tiny nicks on the right side serrations that would otherwise go unnoticed. The action has light operational wear. Pins and controls are free of any notable wear or damage. All markings are clear. Overall, this pistol rates in Excellent condition.

Overall Condition (DJ54): This pistol retains about 98% of its metal finish. There are some very faint little nicks and scratches on the left side of the slide at the front. There are some faint marks on the right rear of the slide next to the sight. Pins and controls are free of any notable wear or damage. All markings are clear. Overall, this pistol rates in Fine-Excellent condition.

Box, Paperwork, and Accessories (Both): Each of these PPK/S include the following:

—paperwork including a manual, warranty, St. Etienne Official Certificate, and a test target.

Our Assessment: The Walther PP (German: Polizei Pistole, or police pistol) series pistols are blowback-operated semi-automatic pistols, developed by the German arms manufacturer Carl Walther GmbH Sportwaffen. It features an exposed hammer, a traditional double-action trigger mechanism, a single-column magazine, and a fixed barrel that also acts as the guide rod for the recoil spring. The series includes the Walther PP, PPK, PPK/S, and PPK/E models. Various PP series are manufactured in Germany, France and the United States. In the past, the PPK version has been manufactured by Walther in its own factory in Germany, as well as under licenses by Manurhin in Alsace, France; Interarms in Alexandria, Virginia, US. The PP and the PPK were among the world’s first successful double action semi-automatic pistols. They are still manufactured by Walther and have been widely copied. The design inspired other pistols, among them the Soviet Makarov, the Hungarian FEG PA-63, the Polish P-64, the American Accu-Tek AT-380 II, and the Argentinian Bersa Thunder 380. The PP and PPK were both popular with European police and civilians for being reliable and concealable. During World War II, they were issued to the German military (officers), including the Luftwaffe, as well as the Ordnungspolizei. This is a consecutive pair of PPK/S’s manufactured in 1960 that are in beautiful condition with official paperwork and original cases. You don’t want to pass up the opportunity to take these ones home! Please see our photos and good luck!