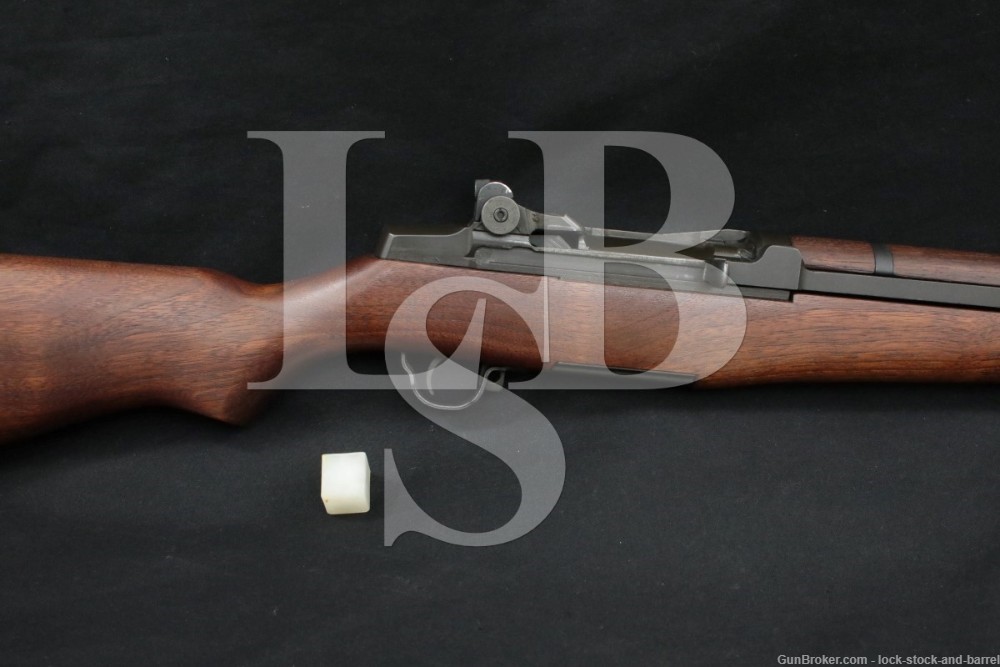 Sights / Optics: The top right of the receiver, next to the windage knob, has been drilled and filled to install a spring & plunger. This allows half-minute adjustments. This was done as part of the U.S.M.C. 7.62 Match Rifle conversion (page 584 of Bruce Canfield’s book, The M1 Garand Rifle).
The rifle has National Match sights installed. The right side of the front sight is marked “NM / 062”. The top of the aperture is marked “595”. The face of the aperture’s riser is marked “NM”. The windage knob is marked “NM”.
The front sight is a blade set between two protective wings. The rear sight is a fully adjustable aperture sight set between two protective wings. The windage knob is marked “LEFT arrow” twice and “BME”. The elevation knob is marked from “2-12” in increments of two and “WC E”.

Stock Configuration & Condition: The bottom of the grip is marked with a “circled P” proof and a small stamping. The left side of the stock, above the trigger, is marked with a Defense “Eagle” acceptance stamp.
The front and rear handguard are glued to the lower band making them a single unit. This was done as part of the U.S.M.C. 7.62 Match Rifle conversion (page 584 of Bruce Canfield’s book, The M1 Garand Rifle).
The top and bottom of the stock have each been built up with bedding compound to tightly fit the receiver and trigger group.
The hardwood stock has a pistol grip, metal nose caps, stacking loop, two sling loops and a metal buttplate with hinged door for storage in the butt. The butttplate shows scrapes. The wood shows various scrapes, scratches and compression marks. Some have damaged small portions of the surface wood or finish. The LOP measures 13 inches from the front of the trigger to the back of the buttplate. The stock rates in about Very Good Plus to Fine overall condition.

Overall Condition: This rifle retains about 97% of its metal finish. The metal shows scuffs, light scrapes, and light handling marks. The right side of the receiver, front of the bolt, and right rear of the barrel show light thinning consistent with cycling. The markings on the metal are deep. Overall, this rifle rates in about Fine condition.

Our Assessment:  This Rare Springfield M1 Garand is a U.S. Marine Corps 7.62mm Match Rifle built from a Rare “X-Prefix” M1 Garand. The Marine Corps only produced a limited number of these Match Rifles. This USMC Match Rifle was converted by the installation of a Military contract 7.62 NATO barrel, so it was in M1 Garand Navy MK2 MOD1 configuration before it was Match Conditioned by the Marine Corps. The rear sight and handguard were specifically modified by the Marine Corps when Match Conditioning this rifle (see above).
The rifle started life as an “X-Prefix” M1 Garand. It is part of a block of about 2,000 sequentially serial numbers M1 Garands in the low six million serial number range. The “X” markings were hand stamped after the rifle markings were applied and the rifle was heat treated. This was done to replace duplicate serial numbers that had erroneously used (pages 489 & 490  of Bruce Canfield’s book, The M1 Garand Rifle).
This is a Rare, highly collectible “X-Prefix” U.S. Marine Corps 7.62mm Match Rifle. Good luck.