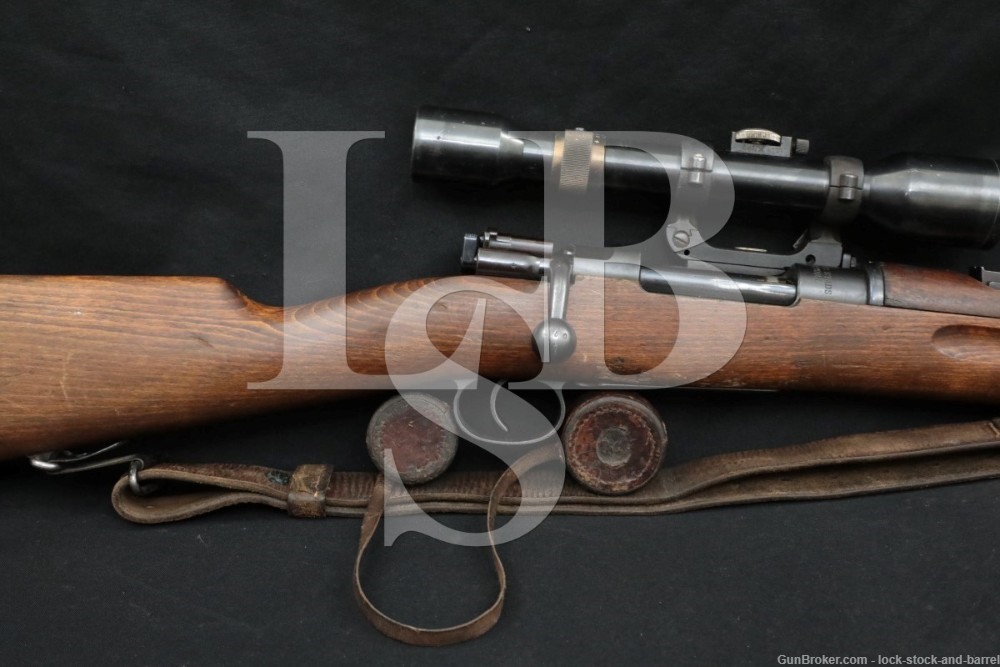 Markings: The import mark on the barrel reads “SAMCO MIA FL / M41B 6.5X55 SWEDEN”. The top of the receiver is marked “crown / C / CARL GUSTAFS STADS / GEVARSFAKTORI. / 1910”. Both the top half and the bottom half (screws to the receiver) of the scope mount are marked with the serial number. The bolt assembly is marked with the last three digits of the serial number in 4 separate areas. Most of the remaining metal parts are with a “crown” and/or with the last 3 digits that do not correlate to the serial number. The top of the rear micrometer sight is marked “SM / sikte / m/55” and with 3 “crowns”. The marking disk is unmarked in all 3 sections. The bottom of the grip is marked with crowns. There are a few other small markings on the rifle.
The scope is marked “AJACK 4X90” just below the top adjustment knob. The metal plate on top of the mount rail is marked “68.”. The scope case is marked “350 150” in black ink.

Sights / Optics: The front sight is a tall bladed post set atop a small base and under a removable protective hood. The rear sight is a micrometer sight marked from “1-6”.
A scope base is attached to the left side of the receiver by 3 screws. The upper half of the scope mount slides on and is locked in place with an oversized lever. The scope is a fixed 4 power German AJACK scope. It uses a tapered post reticle. The rear scope lens shows a small chip in the glass that causes a small faint dot to appear to the left and below the top of the tapered post. The view is clear otherwise. The adjustment knob turns. It is marked with an arrowhead and from “2-8”. The focus ring at the rear functions. It is marked “- 3 2 1 0 1 2 3 +”. The scope tube shows scrapes, small scratches, and some light surface erosion. Overall the scope is in about Very Good Plus condition.

Stock Configuration & Condition: The two piece hardwood stock has a straight grip, finger grooves, nose cap, hole for the included cleaning rod, barrel band with sling loop, sling loop under the butt, marking disk on the butt, and a metal butt plate. The buttplate shows scrapes, scratches, and oxidation. The wood shows numerous scrapes, scratches, and compression marks. Several have damaged small areas of the surface wood. Most of these marks have been oiled over. The LOP measures 14 inches from the front of the trigger to the back of the buttplate. The stock rates in about Very Good overall condition.

Bore Condition: The lands are bright, the grooves are semi bright, and the rifling is deep. There is fouling in the grooves which should clean up some. There is no visible erosion.

Overall Condition: This rifle retains about 96% of its metal finish. The front of the barrel & front sight show scrapes, scratches, and some discoloration. The metal shows scuffs, small scrapes, and a few light scratches. The top rear of the receiver shows a small edge dent. The trigger guard shows scratches and some surface erosion along the edge. The scope base screws heads show heavy use. The markings are deep. Overall, this rifle rates in about Very Good Plus to Fine condition.

Our Assessment: This Swedish Sniper Rifle is an M/42B (M42B). It was originally a Swedish Model 1896 that was produced back in 1910. It was converted to a Sniper Rifle during WWII and is now topped with a fixed 4 power German AJACK scope. The rifle looks good, the bore is strong & bright, and the scope is in nice shape. This Swedish Sniper should so well out at the range. It is a nice package for your collection.
For more info on Swedish M/42B, and a video, see the Forgotten Weapons web page at: https://www.forgottenweapons.com/swedish-m-41b-best-sniper-rifle-of-world-war-two.