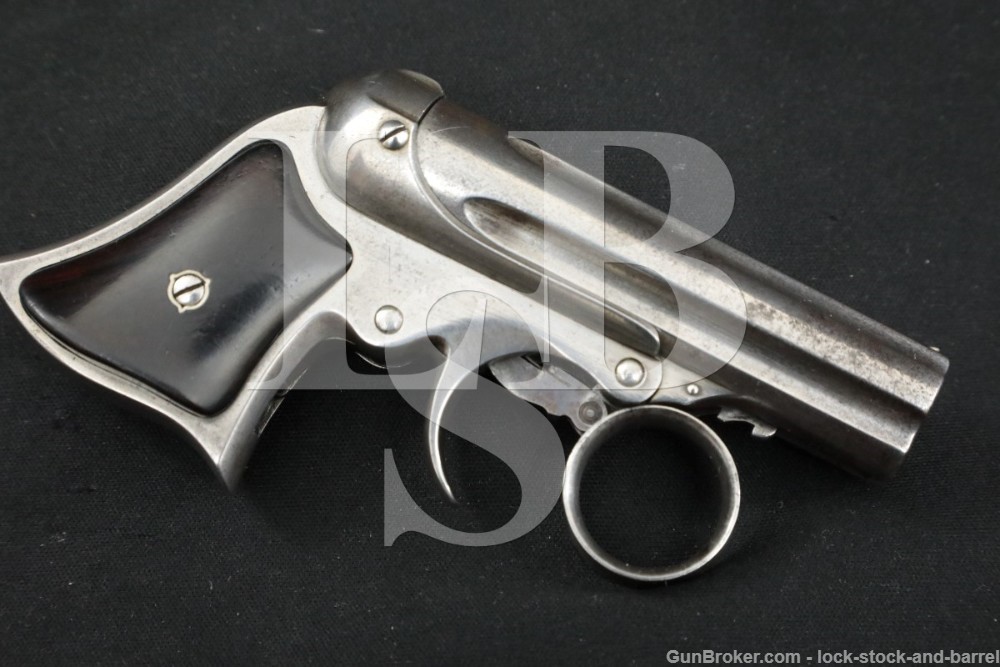 Sights / Optics: The front sight is a small bead fixed to the front of the top barrel. The rear sight is a “V” notched groove in the top of the frame.

Stock Configuration & Condition: The grips are two-piece smooth wood panels. There are a couple faint marks from handling and storage. There are no chips or cracks. Overall, the grips are in about Fine Plus condition as Antique

Bore Condition: The bores are dull with strong rifling where not interrupted by erosion. There is erosion and pitting scattered throughout.

Overall Condition: This pepperbox retains less than 5% of its metal finish. The surfaces have worn bright. There is scattered erosion and discoloration from previous oxidation, the most noticeable is on the barrel cluster. The most noticeable remaining blue is located on the trigger bar. There are scuffs and light marks, likely from abrasive cleaning, most noticeable on the butt of the grip frame. There are a couple little tiny nicks and dings. There is standard operational wear. The screw heads range from sharp to lightly disfigured with a useable slot. The markings are worn, but legible. Overall, this handgun rates in about Good condition as Antique.

Mechanics: The action functions correctly, the ring must be pushed all the way forwards in order to engage the cocking mechanism. There is a plunger that locks up the barrel assembly, it is below the barrel. The trigger must be pulled completely to the rear to fire, if it does not touch the metal behind it it will not go off. We did not fire this handgun. As with all used firearms, a thorough cleaning may be necessary to meet your maintenance standards.

Our Assessment: Shortly after the American Civil War, a New York dentist-turned-firearms inventor named William H. Elliot designed a revolutionary pocket pistol to fire the .41 Short rimfire caliber metallic cartridge. At the time, it was the most powerful small handgun cartridge on the market. This compact but hard-hitting pistol was immediately embraced by riverboat gamblers, ladies of the night, messengers, travelers, shopkeepers and anyone else who needed an easily concealable, large-caliber weapon for self defense. Its novel design featured twin, over-and-under barrels that swung open from a top hinge for loading and cartridge extraction, a “spur” trigger and large, comfortable grips. This was one, but not the first, of the more than 130 firearms patents Dr. Elliot would be granted over the last half of the nineteenth century. To manufacture his new pistol, Dr. Elliot contracted with the E. Remington & Sons arms firm in upstate New York, which by 1867 had been in the gunmaking business for more than fifty years. The Remington Double Deringer, as it has become known among collectors, was sleek, simple, sturdy, effective and inexpensive. One of the guns that followed was a four or five barreled derringer with a ring trigger and a rotating firing pin. This model was made in both .22RF and .32RF, and was referred to in Remington’s literature as Elliot’s Patent Repeating Pistol. Others referred to it as a ring trigger derringer and others as a pepperbox. This derringer is chambered in .22 Rimfire, the less common of the two models with only about 30 percent of the approximately 25,000 guns produced in this chambering. The derringer is in about Good condition as Antique with good mechanics and nice markings. This is very innovative design and worth in a spot in any collection of derringers and pocket pistols. Please see our photos and good luck!