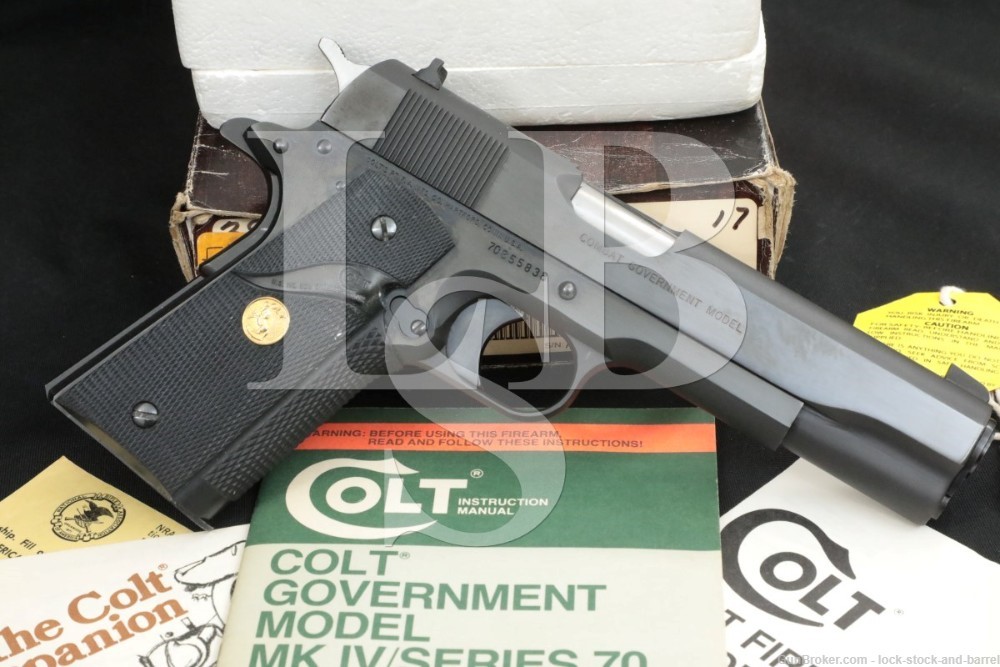 Sights / Optics: The front sight is a patridge blade fixed to the barrel. The rear sight is a square notch with a white outline and is dovetailed into the slide.

Stock Configuration & Condition: The grips are checkered black rubber with gold-colored colt medallions that wrap around the frontstrap. There are a few light handling marks. The grip rates in about Excellent overall condition.

Overall Condition: This handgun retains about 98% of its metal finish. There are some light handling marks. There is light operational wear. The screw heads are sharp. The markings are crisp. Overall, this handgun rates in about Excellent condition.

Box, Paperwork & Accessories: Included is a serial matching box with styrofoam tray, paperwork including the manual, and a 7-round magazine.

Our Assessment: The Combat Government models were produced at the end of Series 70 production run and were only available in limited quantities. A silver soldered on front sight (much was made of this at the time) with a partridge form like a Gold Cup or late Service Ace was the primary modification from a stock series 70. The back sight featured a taller standing leaf, similar to the series 80’s but with a white outline instead of the dots. The top of the slide isn’t parkerized, but rather a coarse bead blast before bluing. Like a commander, the ejection port was lowered and given a better notch. The trigger was a long, contemporary version of the original smooth-faced 1911 trigger, but instead of being a single piece, it was crimped into the stirrup instead of being one piece milling. The mainspring housing was a flat Colt commercial steel housing with vertical serrations, similar to the Gold Cups. The edges of the mag well were lightly champfered. The slide was marked Combat Government and the came in a polished blue finish. These were Colts out-of-the-box IPSC gun and as such were often further customized and worked on by shooters. This one looks great and has hardly any wear, with its box and accessories, this is sure to go to a Colt collector who is yet to add one to their collection. Please see our photos and good luck!