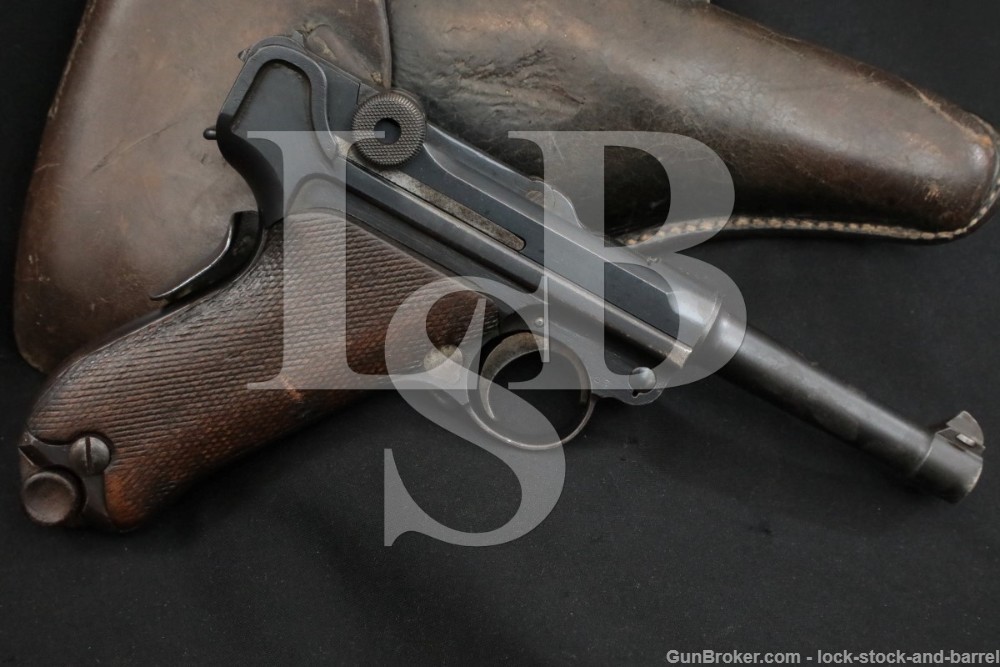 Year of Manufacture: Sources vary. The Standard Catalog of Luger and Martens’ and de Vries’ “The Dutch Luger” indicate that these pistols were made in 1921 and 1922. Jan C. Still’s “Weimar and Early Nazi Lugers” states that production took place between 1921 and 1926. Still states that the parts were made by DWM, sent to Vickers for assembly and proofing, and then sent to Java for final assembly and finish, accounting for a wider window.

Stock Configuration & Condition: The grips are two-piece checkered walnut panels. The grips show moderate handling wear, with the right panel worn more than the left. There are some scattered nicks, scuffs and scratches, most notable on the right panel near the middle. The checkering ranges from well defined to worn smooth. The left panel has a loss around the magazine release. The left panel also has light play to the frame. There are no cracks. The grips are in Good overall condition as likely not original to the gun.

Type of Finish: Blued, some small parts are Strawed. The interior of the frame is in the white.

Finish Originality: Original. The “1929” marking on the barrel indicates the year that the barrel went into service. While it was normal to replace barrels every 6 years or so due to the climate of the Dutch East Indies, the British proof markings on the barrel strongly indicate that this is not a replacement barrel, but rather it was a pistol in the material reserve which officially entered service in 1929.

Overall Condition: This pistol retains about 85% of its metal finish. The balance is mostly in scattered light surface oxidation and minor erosion. There is some scattered light wear and edge thinning, most notable on the trigger guard, takedown lever and sideplate. There are some scattered light nicks and scuffs. The action shows operational wear and there is handling wear on the controls. The takedown lever’s detent/retaining spring is missing. The screw heads are tool marked with serviceable slots. The markings are clear. This pistol rates in about Very Good overall condition.

Mechanics: The action works correctly, however the takedown lever’s detent/retaining spring is missing. The barrel extension has no play to the frame. We have not fired this pistol. As with all used firearms, a thorough cleaning may be necessary to meet your maintenance standards.

Box, Paperwork & Accessories: This pistol comes with a leather flap-holster, a single magazine with wood floorplate, and signed paperwork from James Earl Jones certifying that this was a part of his collection. The holster shows scattered wear and some discoloration with intact stitching. The magazine’s floorplate has play to the body and the magazine shows scattered wear and oxidation with intact feed lips and a strong spring.

Our Assessment: The Luger (Pistole Parabellum) is perhaps the most aesthetically and ergonomically pleasing of all autoloading centerfire pistols. It is also one of the strongest, most accurate and most recognizable service pistols ever made. Georg Luger developed his famous pistol in 1898-1899 (starting with the Borchardt/Luger transitional pistol). The Luger is, essentially, a much improved Borchardt type pistol, which was itself based on the toggle action concept used by Sir Hiram Maxim in the world’s first practical machine gun. The pistols were made for decades by a few different manufacturers and saw service with a number of countries as well as great commercial success. This example was made for the Netherlands Indies Army and has an interesting history. After the Great War, the Treaty of Versailles placed restrictions on DWM’s production of military pistols. To circumvent these restrictions, in order to complete the order from the Dutch, DWM produced parts for these pistols which were then shipped to Vickers in England who assembled and proofed the pistols. They were then shipped to Java for final assembly and finish for service with the Dutch forces there. This example has a unit plate on its frame indicating that it served with the 4th Company of Coastal and Anti-Aircraft Artillery. It’s barrel service year makes it unlikely that the pistol was still present for the Japanese invasion in early 1942. The pistol is in Very Good condition with about 85% of its metal finish and strong mechanics. The serialized parts match, but it appears that the takedown lever and sideplate as well as the grips have been replaced. The bore has some erosion but has well defined rifling and should certainly be serviceable should you wish to fire the pistol. That said, given the low numbers produced, about 6,000, the Dutch Vickers contract Lugers are quite collectible, and a pistol in this condition should attract collectors and is made even more desirable because it was owned by James Earl Jones. Please see our photos and good luck!