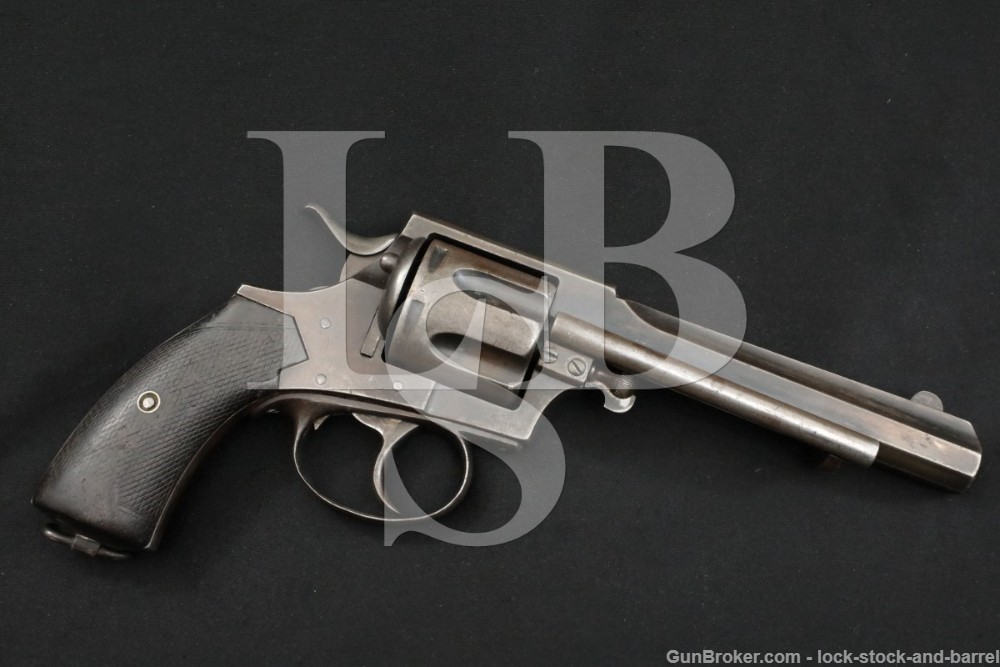 Sights / Optics: The front sight is a rounded blade fixed to the top rib. The rear sight is a “V” notch milled into the rear of the top strap.

Stock Configuration & Condition: The two piece hard wood checkered grips show multiple marks in the finish and wood. The checkering is very shallow and the points are flat. There are notable compressions on both panels. The checkering is worn smooth at the bottom of both panels. The grips were probably refinished long ago. The grips rate in about Good overall condition as Antique.

Bore Condition: The bore is somewhat bright and the rifling is sharp. There is some scattered erosion and pitting.

Overall Condition: This handgun retains about 45% of its current metal finish. The leading edges have thinned. The finish throughout can be described as an even integration of blue and patina throughout with the most blue in the cylinder flutes. There are various nicks, dings, and scratches throughout. There are mars on the edges of the trigger guard. The screw heads are slightly disfigured with serviceable slots. The markings are shallow but clear. Overall, this handgun rates in about Very Good condition as antique.

Mechanics: The action functions correctly. The cylinder lock up produces considerable play. We did not fire this handgun. As with all previously owned firearms, a thorough cleaning may be necessary to meet your maintenance standards.

Our Assessment: Webley produced their first pistol in 1853, introducing their first double action in 1867.  They are perhaps best known for providing the British Army’s pistols during the late 19th and early 20th century.  The Webley No.5 is one of the later pistols produced by Webley before they altered their nomenclature from ‘Numbers’ to ‘Marks’ when the Webley MkI was adopted by the British Army in 1887. The No.5 is sometimes referred to as the Webley New Model, the New Army Express or the No.5 Army Express. The Webley No.5 was introduced in 1878 ostensibly as a rival to Colt’s Double Action Army. This example is in about Very Good condition as Antique and should catch the eyes of Webley enthusiasts. Please see our photos and good luck!