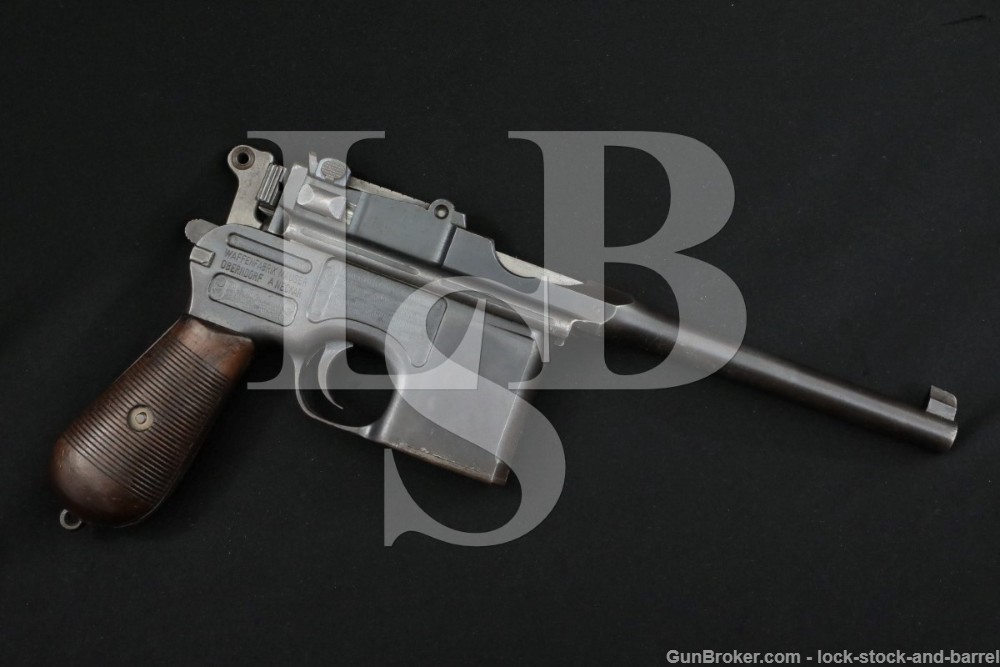 Stock Configuration & Condition: The grips are two-piece serrated wood panels. The grips show light-moderate handling wear with scattered nicks, scuffs and scratches. The serrations show some wear, most notable on the right panel toward the bottom, but are generally well defined. There is wear on their bottoms from a previously installed lanyard ring. There are no chips or cracks. Overall, the grips are in Good-Very Good condition.

Bore Condition: The bore is mostly bright with sharp rifling. There is infrequent minor erosion in the bore, most at the muzzle-end.

Overall Condition: This pistol retains about 75% of its metal finish. The finish is thinning at all edges. There are scattered light nicks, scuffs and scratches, most notable on the bottom of the barrel and magazine floorplate. There is some light finish wear, most on the barrel and floorplate, but there is also a spot of wear on the rear of the frame below the lock frame. There is scattered minor surface oxidation and infrequent erosion, most on the floorplate and along the barrel extension’s frame rails. The action shows operational wear. The screw head is sharp. The markings are clear. Overall, this pistol is in Very Good condition.

Our Assessment: The Broomhandle Model 1896 Mauser is certainly an interesting looking firearm. Its features are the most distinctive of any other pistol. In addition to being popularized in Soviet films as the iconic weapon of the Russian revolution and civil war, it was even used as a basis for futuristic weapons like the blaster used by Han Solo in Star Wars. This pistol was made around 1918 and has some interesting markings. It has what appears to be a unit marking, but we were not able to determine what the markings represent. It has serial matching parts, with the exception of its locking block, and wear which could be considered light considering the typical wear of WWI issued firearms. This will make a great addition to a WWI military or early autoloading handgun collection. Please see our photos and good luck!