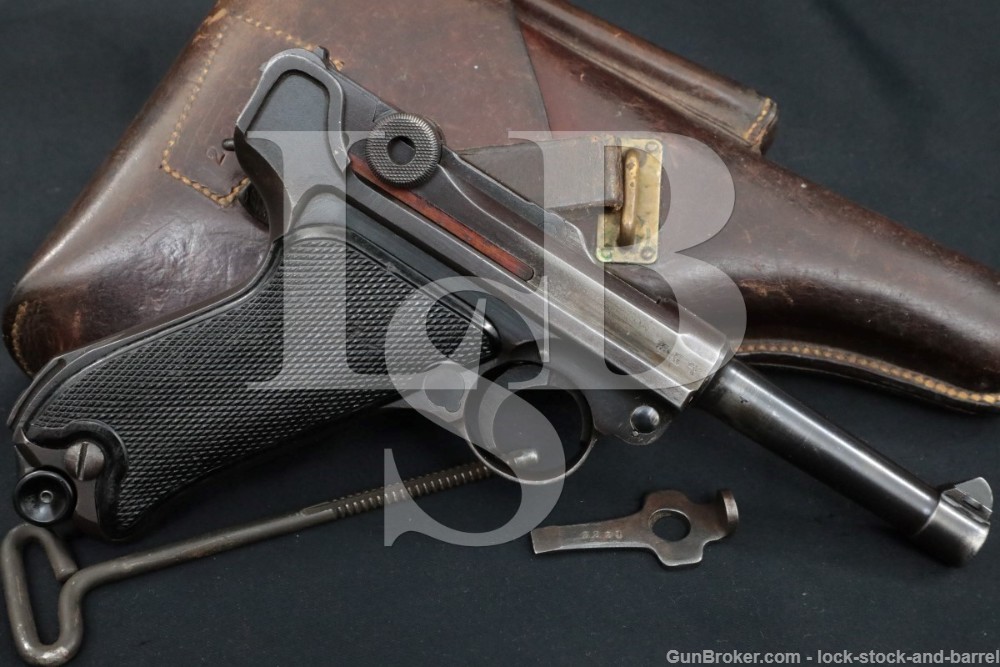 Stock Configuration & Condition: The grips are two piece checkered black synthetic panels. The grips have some scattered nicks, scuffs and scratches, most notable toward the top of the right panel. The checkering is generally well defined. There are no chips or cracks. Overall, the grips are in Very Good condition as not original to the gun.

Overall Condition: This pistol retains about 75% of its current metal finish. The finish is thinning at most edges. The grip areas have handling wear and have gone to a light patina. There is some scattered wear, most notable on the barrel and right of the barrel extension, which also show treatment with cold blue. There is wear on the raised portion of the sideplate. There are some scattered light nicks, scuffs and scratches including tool marks at the takedown lever on the right of the frame. There is some minor erosion under the finish. Some areas of the finish have a plum hue, most notable on the top of the barrel extension and toggle-train. The action shows operational wear. The screw heads are tool marked with strong slots and the slots are different widths. Most markings are clear, some are worn, but legible. Overall, this pistol is in Very Good condition as refinished.

Mechanics: The action functions correctly. There is very light play between the barrel assembly and frame. We did not fire this pistol. As with all used firearms, a thorough cleaning may be necessary to meet your maintenance standards.

Box, Paperwork & Accessories: This pistol comes with a brown leather flap-holster, a single 8-round magazine, a takedown tool and a cleaning rod. Please note, due to the holster design, we were not able to remove the cleaning rod from its pouch inside the holster flap. The takedown tool and holster are marked “2221”. The holster shows scattered wear and discoloration with intact stitching. The magazine is marked “fxo”, “P.08” and with two eagle over “37” waffenamts. The magazine has operational wear, some minor surface erosion, intact feed lips and a strong spring.

Our Assessment: The Luger (Pistole Parabellum or P-08) is perhaps the most aesthetically and ergonomically pleasing of all autoloading centerfire pistols. It is also one of the strongest, most accurate and most recognizable service pistols ever made. Georg Luger developed his famous pistol in 1898-1899 (starting with the Borchardt/Luger transitional pistol). The Luger is, essentially, a much improved Borchardt type pistol, which was itself based on the toggle action concept used by Sir Hiram Maxim in the world’s first practical machine gun. The Luger was so reliable and well liked that it was still being made and issued to German troops well after the P38 was adopted by the army. The largest percentage of Lugers were made by DWM, which became Mauser in 1930. During the war, the Germans used codes to disguise the manufacturer of their weapons, and the toggle links changed from DWM to S/42, 42 and finally byf. The byf marked Lugers were the last made by Mauser before they were forced to abandon the Luger in favor of the P38. This is a Mauser Model P.08 byf-code Luger pistol manufactured in 1942. The pistol is in Very Good condition as refinished, with about 75% of its current finish remaining. The bore is great and the mechanics are strong. Interestingly, this pistol has 1977 German commercial proof marks, indicating that it was still in Germany in the 1970s, but has no US import markings. This pistol will be neat for those wanting a piece of German history and for those collectors with an interest in German weaponry. The byf Lugers represent the last of the WWII Mauser-made Lugers and are a must-have for any Luger collector. Please see our photos and good luck!