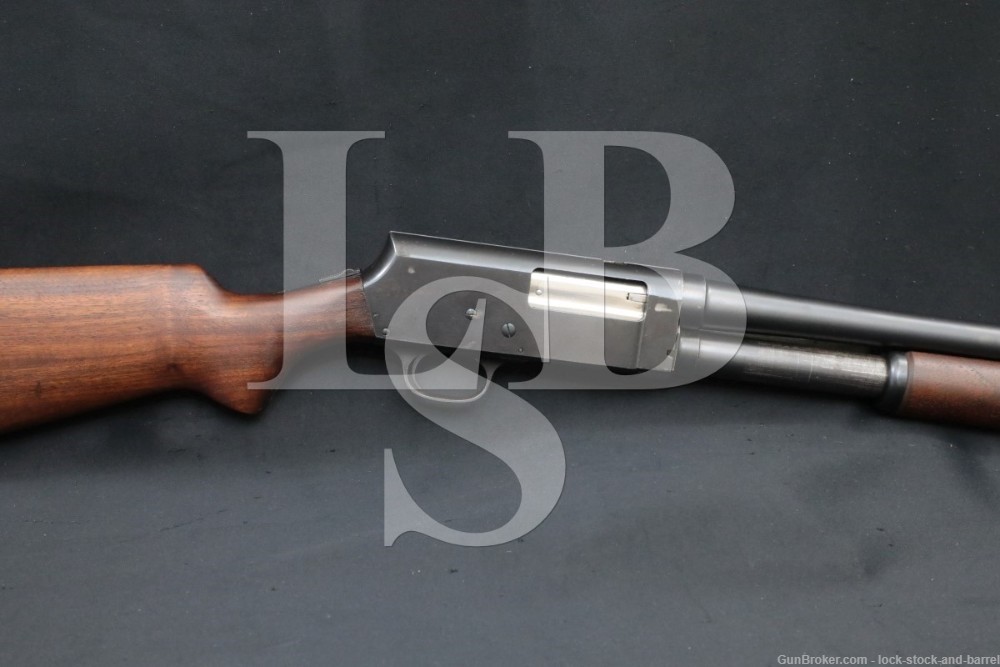 Sights/Optics: This shotgun is mounted with a brass bead at the front of the barrel. The top of the receiver is serrated to reduce glare.

Stock Configuration and Condition: The stock and forend are two-piece smooth walnut with semi-pistol grip and serrated black hard rubber buttplate. The buttstock has a few light compressions and draglines. The forend has a few light dings. The LOP measures approximately 14″ from the front of the trigger to the back of the buttplate. The plate has light wear at the heel and toe with sharp serrations, in about Very Good-Fine condition. Overall, the stocks rate in Very Good-to-Fine condition.

Bore Condition: The bore is mostly bright with no erosion, but there is a bit of stubborn fouling in spots.

Overall Condition: The shotgun has about 93% of its current refinish remaining. The receiver has a few patches of light surface oxidation along with scattered light nicks and scuffs. The barrel has intermittent minor nicks and a few scuffs, especially at the barrel tip. The magazine tube has light operational wear. The screw heads range from sharp to lightly tool marked with strong slots. The markings are clear. Overall, this shotgun rates in Fine condition.

Mechanics: The action functions correctly. The safety is a slider on the top tang. The slide release is a button on the left of the trigger guard at the rear. We did not fire this shotgun. As with all used firearms, thorough cleaning may be necessary to meet your maintenance standards.

Our Assessment: This is a Stevens-Savage M520-30 Riot Gun made between 1942-1944. Like most WWII era shotguns, the Stevens 520 series and 620 series were made for the war effort in order to fill various roles including front-line combat, police and patrolling, and for Aerial gunnery training to hone the skills of defensive gunners in use in the various light, medium, and heavy bombers being fielded by the U.S. Army Air Corps./Army Air Force and U.S. Navy. Total wartime production of all Model 520-30 shotguns was approximately 35,000, though the split between the three variations is not known. These guns, like many of the other various combat shotguns in use by the U.S. Military, soldiered on into the Korean War as well as the Vietnam War, as well as serving faithfully in various Law Enforcement agencies in the post-war years. This Model M520-30 has a matching barrel assembly and receiver and this gun is in Fine condition retaining approximately 93% of its metal finish and has a bright bore with no erosion, though there is some fouling. This would make a nice addition to a US Military shotgun collection and would still serve as a good defensive shotgun to this day. Please see our photos and good luck!