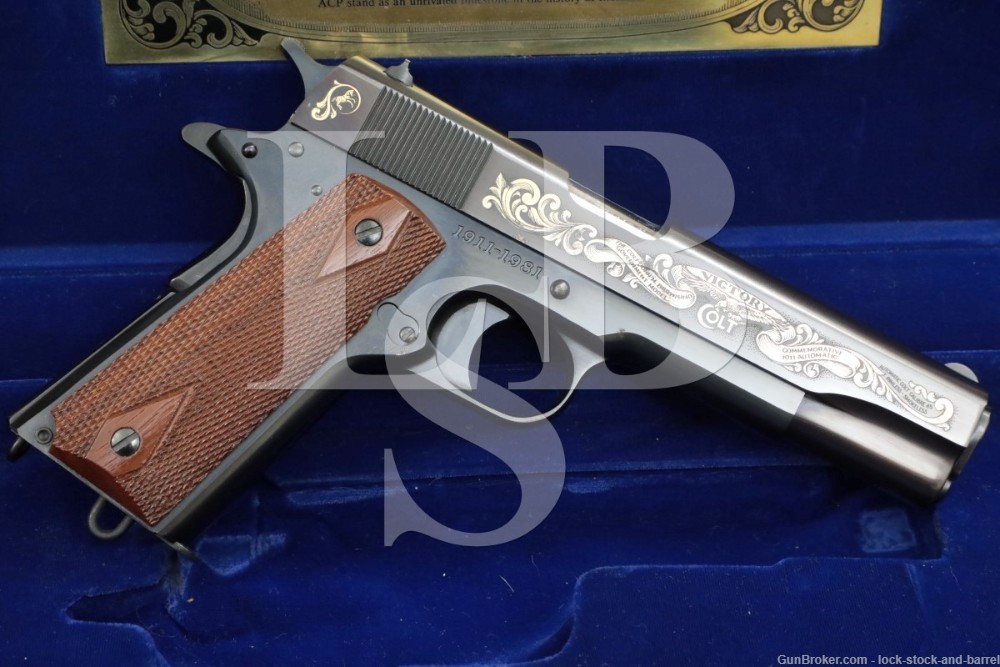 Markings: The left side of the slide has gold scroll surrounding a doughboy scene under “since 1911” banner, gold panel marked “PATENTED / APR. 20, 1897 / SEPT. 9, 1902 / DEC. 19, 1905 / FEB. 14, 1911” with a banner across it marked “Colt’s Pt. F.A. Mfg. Co. Hartford, Ct. U.S.A.”, banners marked “C.L.F. Robinson” and “J.M. Browning” above and below a scene of the two men and behind the slide serrations with a rampant colt logo. The right of the slide has the same rampant colt logo behind the slide with gold scroll surrounding banners marked “THE COLT JOHN M. BROWNING / GOVERNMENT MODEL”, “VICTORY” over an American eagle and Colt logo, and “COMMEMORATIVE 1911 AUTOMATIC”. Outside and above the gold scroll toward the front is marked “AUTOMATIC COLT CALIBRE .45 / RIMLESS-SMOKELESS”. The right of the frame is marked “1911-1981”. The left of the frame is marked “CJMBC0603”.

Overall Condition: This pistol retains about 96% of its metal finish. There are a few small spots of light erosion and finish loss from previous oxidation on the right side of the slide along the bottom edge and on the scrollwork between the serrations and the word “VICTORY”.There are a couple spots of light erosion on the right side of the frame at the rear of the dust cover and in front of the magazine release. The slide is slightly plum, hardly noticeable. There is some light operational wear. There are light handling marks. The screwheads are sharp. The markings are clear. Overall, this gun rates in about Fine condition.

– French-fit wood Colt John M. Browning Commemorative display case (no key included). Some of the lining is coming apart from the wood.
– One 7-round magazine with lanyard ring floorplate.

Our Assessment: Made in 1981 to commemorate America’s greatest firearms inventor, this is a Colt Government Model 1911, one of Browning’s most iconic designs, which has been decorated in gold and has scenes commemorating Browning and the influence he has had on America. It was produced after 90 years of production and more than 3,000,000 Government Models produced with the 1911 serving as the standard issue sidearm of US Armed Forces through two World Wars and other conflicts. The pistol is a throwback to the original, with flat mainspring housing and no trigger relief cuts on the frame as well as a lanyard-loop magazine. It comes with a nice case that’s ready for display. For fans of Browning, Colt or the 1911, this is a pistol well worth adding to your collection. Please see our photos and good luck!