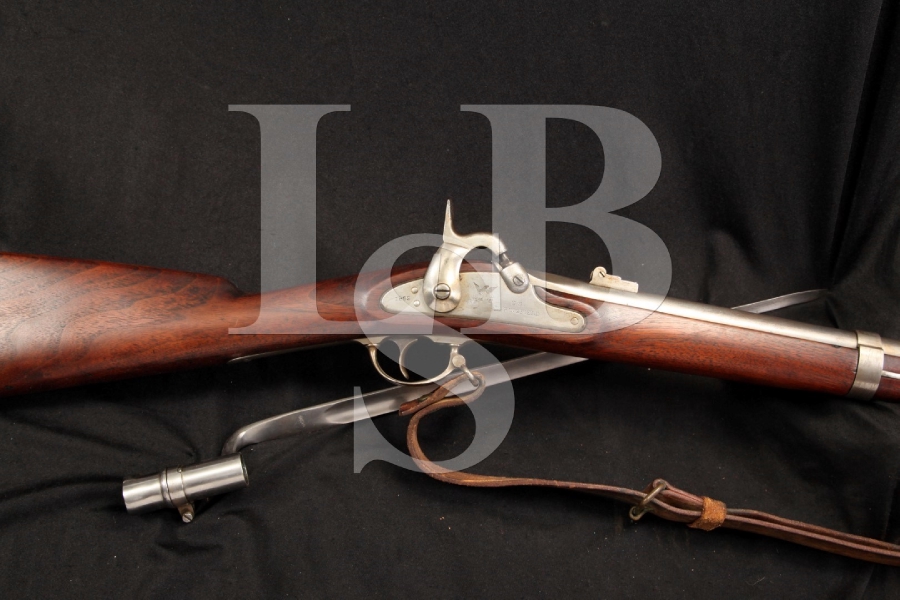 Sights / Optics: The front sight is an inverted “V” post. The rear sight is made up of three separate “V” notched blades that flip up into position for successively longer distances. The first blade is marked “1” and the second is marked “3”.

Stock Configuration & Condition: The hardwood stock has a straight grip, metal nose cap, three barrel bands, a cleaning rod, two sling loops and a metal buttplate. The nose of the stock has a few thin cracks. One crack is on the edge and is more pronounced. The rest of the stock has very light handling and compression marks. The LOP measures 13 3/8” from the front of the trigger to the back of the buttplate. The stock rates in about Fine Condition overall condition for an antique.

Type of Finish: In the White

Bore Condition: The bore is bright and the rifling is defined. There is light erosion.

Overall Condition: This rifle was issued unfinished. The balance of the finish shows wear, light scratches, some surface erosion and light pitting. The screw heads show use. The markings are deep. Overall, this rifle rates in about Fine condition for an antique.

Mechanics: The action functions. We have not fired this rifle.

Our Assessment: Over 1,000,000 1861 U.S. Percussion Rifle-Muskets were made during the Civil War. Springfield Armory was the main supplier, delivering 265,129 units between 1861 and 1862. Many subcontracts were issued to complete all orders. The Trenton Contract was given to the Trenton Locomotive and Machine Company; between 1863 and 1864 they produced 21,995 1861 Rifle-Muskets. See pages 39 and 40 of “The Standard Catalog of Civil War Firearms” by John F. Graf. See also pages 570 and 571 of “Flayderman’s Guide to Antique American Firearms”, 9th Edition, by Norm Flayderman. This 1861 Rifle-Musket has Trenton Contract markings on the barrel and stock, but it appears a standard Springfield Armory lock plate was used. Mismatching of parts did occur as these Rifle-Muskets were produced during the war in large numbers. The bayonet is an aftermarket reproduction.