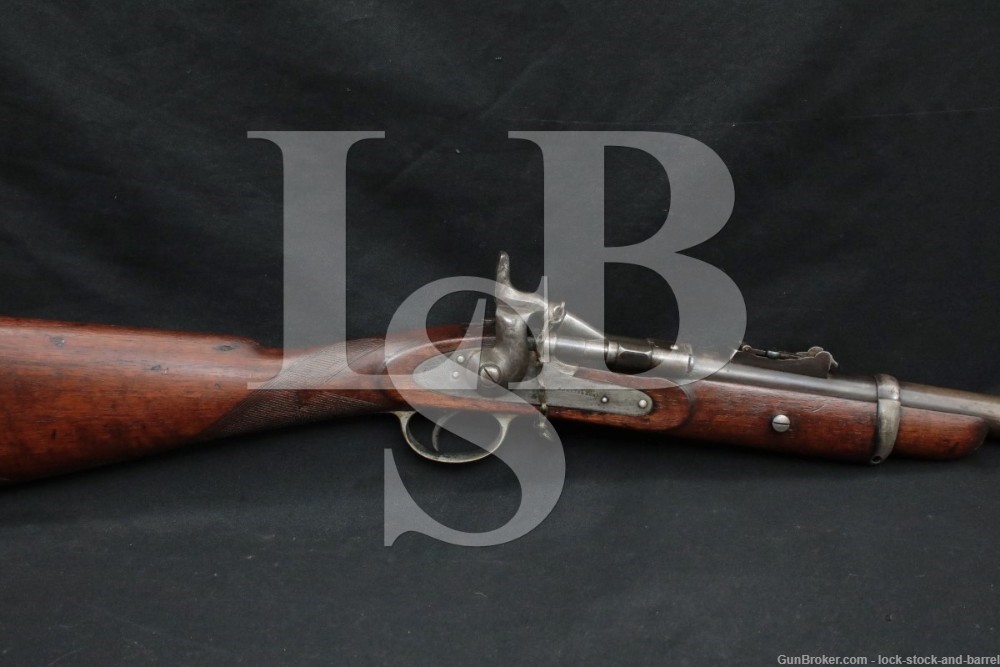 Stock Configuration and Condition: The stock is one-piece wood with barrel band, sling swivel bar with lanyard ring, checkered straight grip, and steel buttplate. The stock has light scuffs, compressions, and dings throughout, nearly all of which have been oiled over. More notable instances can be seen on the left side of the forend and the right side of the buttstock. There is a light nick in the wood where it meets the receiver. The LOP measures 14” from the front of the trigger to the back of the buttplate. The plate has scattered wear in the form of scuffs and scrapes and light staining. Overall, the stock rates in Good-to-Very Good condition, as antique.

Bore Condition: The bore is mostly bright with well-defined rifling. There is very minor erosion in spots and light stubborn fouling throughout.

Overall Condition: This rifle retains about 5% of its metal finish. The balance of the finish can be found on the barrel around the rear sight base. Otherwise, metal has gone to white, or to a light patina. The barrel has light nicks and scuffs throughout. The action has moderate operational wear. The screw heads range from sharp to disfigured with usable slots. The markings range from obscured to clear. Overall, this rifle is in about Good-to-Very Good condition, as Antique.

Our Assessment: Originally developed by a New York-based entrepreneur for the British, the Snider breech-loading system was designed to economically convert existing muzzle-loading arms to use a breech-loaded cartridge. This allowed Britain to convert their existing inventory to use the new technology which allowed rifles to be fired faster, more reliably, and with ammunition easier to store and transport. At the time, this upgrade gave troops an astonishing 284% increase in fire-rate. The sound of Infantry line volleys were described as “canvas ripping”. The Snider conversion was more of a stop-gap, being swiftly replaced by the Martini, but was a significant development in military small arms. This is a contract rifle made by I. Hollis & Sons, a gunmaker like so many others that has been lost to time. While very little info is available on the firm, we know they made shotguns and assorted rifles, and in the case of the Snider Sporter, arms for the British War Department. Anecdotal information tells us that these rifles were used in colonization efforts, and sent to countries like India or Africa. Conversions such as these are a fascinating aspect of military weapons history. This example is, for an antique, in Good-to-Very Good condition with a more than decent bore. Goodluck and happy bidding!