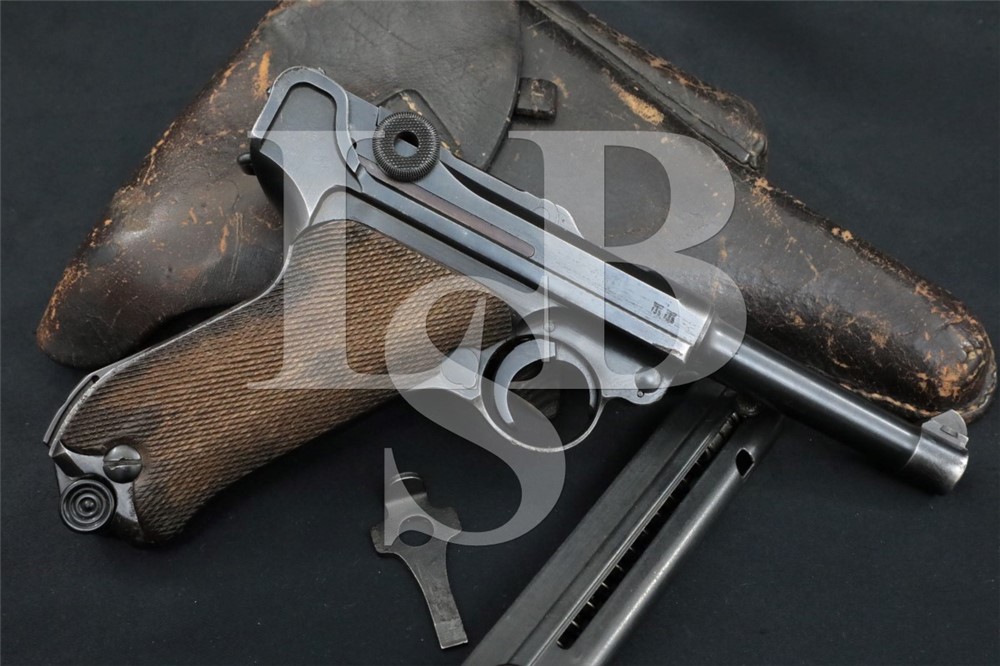 Stock Configuration & Condition: The grips are two piece checkered wood panels. The grips have light handling wear with scattered discoloration. There is an area at the top of the left panel which appears to only have vertical cuts, appearing as serrations, not checkering. Otherwise, the checkering is well defined. There are no chips or cracks. Overall, the grips are in Very Good condition as not original to the gun.

Bore Condition: The bore is mostly bright with sharp rifling. There is no erosion in the bore, but there is some stubborn copper fouling.

Overall Condition: This pistol retains about 85% of its current metal finish. The finish is thinning at most edges. There is wear on the left of the barrel and the right of the barrel at the muzzle. There is some other scattered more minor wear. There is scattered surface erosion, most notable on the top of the left grasping knob, the sideplate, and the left-front of the frame. There is also erosion under the grip panels. There is some minor erosion under the finish, most notable on the front toggle link. There are some scattered light nicks and scratches. The action shows operational wear. The screw heads are tool marked with strong slots. Most markings are clear, some are worn, but legible. Overall, this pistol is in Very Good condition as refinished.

Box, Paperwork & Accessories: This pistol comes with a black leather flap-holster, takedown tool and a total of two 8-round magazines with black plastic floorplates. The holster has worn markings on the back including a waffenamt and has been hand-carved with “GERALD / REED” and a number, the number is also hand-carved on the outside of the flap. The holster has moderate wear with a puncture on the top of the flap, another toward the bottom, torn stitching on the tool pouch inside the flap, scattered surface cracking and discoloration. The magazines have no markings and appear to be modern reproductions. The magazines show minor wear, intact feed lips and strong springs.

Our Assessment: The Luger (Pistole Parabellum or P-08) is perhaps the most aesthetically and ergonomically pleasing of all autoloading centerfire pistols. It is also one of the strongest, most accurate and most recognizable service pistols ever made. Georg Luger developed his famous pistol in 1898-1899 (starting with the Borchardt/Luger transitional pistol). The Luger is, essentially, a much improved Borchardt type pistol, which was itself based on the toggle action concept used by Sir Hiram Maxim in the world’s first practical machine gun. The Luger was so reliable and well liked that it was still being made and issued to German troops well after the P38 was adopted by the army. The largest percentage of Lugers were made by DWM, which became Mauser in 1930. During the war, the Germans used codes to disguise the manufacturer of their weapons, and the toggle links changed from DWM to S/42, 42 and finally byf. The byf marked Lugers were the last made by Mauser before they were forced to abandon the Luger in favor of the P38. This is a Mauser Model P.08 byf-code Luger pistol manufactured in 1942. The pistol is in Very Good-plus condition as refinished, with about 85% of its current finish remaining. The bore is great and the mechanics are strong. This pistol will be great for those wanting a piece of German history and for those collectors with an interest in German weaponry. The byf Lugers represent the last of the WWII Mauser-made Lugers and are a must-have for any Luger collector. Please see our photos and good luck!