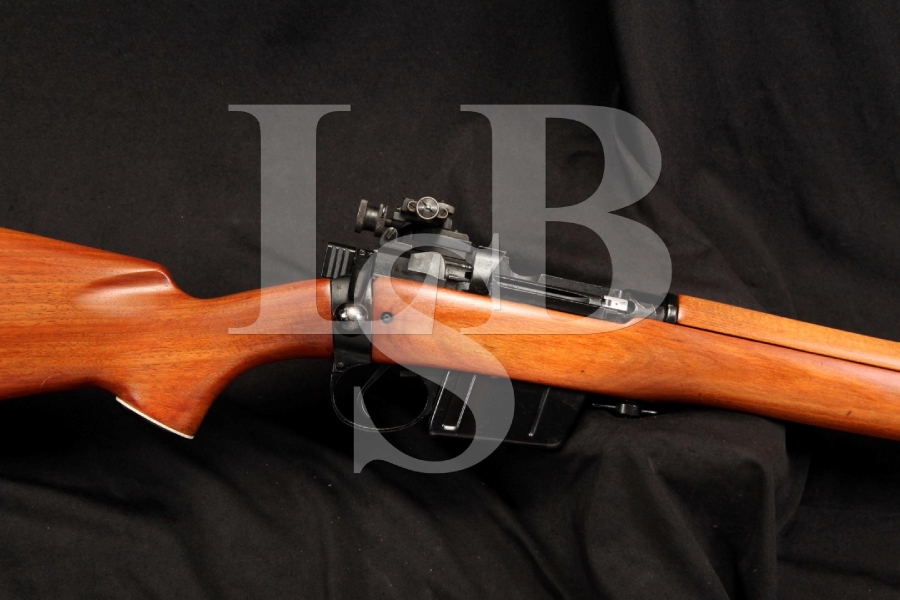 Action Type: Bolt Action with 10 Round Removable Magazine Which Can Also Be Fed by Stripper Clips

Barrel Length: The heavy barrel is about 27” in length and 0.777” in diameter just behind the rear sight.

Sights / Optics: There is a barrel band fixed to the front of the barrel with a male dovetail running fore and aft. The front sight is a large globe mounted onto the dovetail. The globe has replaceable sight inserts and has a “donut” insert installed. The rear sight is a target type aperture sight mounted to the left side of the receiver and adjustable for windage and elevation. The base of the sight is marked “921” and the sight is marked “ Alf. J. Parker / Birmingham” and “Model T.Z. 4/47”. The top of the chamber ring is drilled and tapped for a scope mount.

Stock Configuration & Condition: The stocks are three piece walnut with a light reddish brown satin finish consisting of a buttstock, forend and handguard. The top of the handguard is flat to allow clearance for the objective lens on a scope. The buttstock has a pistol grip, Monte Carlo comb, cheekpiece and a brown recoil pad with a Parker Hale logo. The recoil pad has a black and white spacer and the grip has a black plastic checkered grip cap with white spacer. There are sling swivels mounted at the front of the magazine and on a forend/handguard band. The stock shows light handling marks with compression marks along the belly, a mark on the front edge of the grip cap and a chip at the top left corner of the stock at the receiver. There also compression marks on the bottom of the forend and on the flat of the handguard. The stocks have been re-finished, and there are light oil stains under the finish around the metal parts and what appear to be thinned areas on the edge of the cheekpiece and on the front of the grip. The LOP measures 14 ¼” from the front of the trigger to the back of the recoil pad, which is hard and slightly proud of the wood at the toe. The recoil pad is in about Good condition and the stocks rate in about Very Good overall condition.

Type of Finish: The finish is a dark black paint.

Bore Condition: The bore is bright. The rifling appears rounded on the edges, as though from wear, but we are thinking it was made this way. There is no erosion. Our bore gauge measures a ME of -0.5, which is tight for even a new barrel.

Box, Paperwork & Accessories: This rifle comes with the attached target sights and a 10 round magazine. The magazine has been refinished with black paint. The follower is marked “CR1256 1965” and with a “D”. The side of the magazine is marked “CR 141A 65 D”. The bottom of the magazine is marked “392.”. The magazine shows wear through the finish on the sides, with handling marks under and through the finish. It is in about Very Good condition. This rifle also comes with a blued 4X10 variable power scope. It is marked “Germany / Pecar / Berlin”. The objective is about 45mm and the reticle is a fine cross-hairs. The body of the scope shows thinning with spots of surface loss and pinprick surface erosion. There are scratches/compression marks on the tube from where scope rings were mounted. The power ring turns freely. Overall, this scope is in about Very Good condition.

Our Assessment: From http://world.guns.ru/sniper/sniper-rifles/brit/enfield-l42a1-and-enforcer-e.html: “After the adoption of the 7.62x51mm round as the NATO standard rifle round in 1950s, British Royal Small Arms Factory (RSAF) at Enfield Lock developed a conversion for many surplus Lee-Enfield SMLE No.4 rifles which included a new heavy barrel chambered for 7.62mm NATO ammunition, and a shortened forend and handguard. This conversion was intended for competitive shooting when mounted with adjustable open sights. Later, the L42A1 military sniper rifle was created with the addition of a scope mounting bracket to the left side of the receiver. Early in 1970, RSAF developed a police version of the L42A1, called “Enforcer” with a more sporterized buttstock with semi-pistol grip and integral cheekpiece. It also used match type iron sights and commercial telescopic sights.”. This rifle is an Enforcer chambered in 7.62 Nato that has had its scope removed, leaving the match target sights. The metal and stock have been refinished, with marks through the new finish in both. The rifle is in about Very Good condition with a very tight bright bore that has unique looking rifling. This rifle should make someone a very nice target rifle. Although it is a little light by some standards for use as a target rifle, its weight would seem to be an advantage when firing offhand, and the British army and police sharpshooters obviously made it work very well for 15 years. It is not too heavy to be used for deer hunting, and can be used on everything from small antelope on up to elk with the right loads.