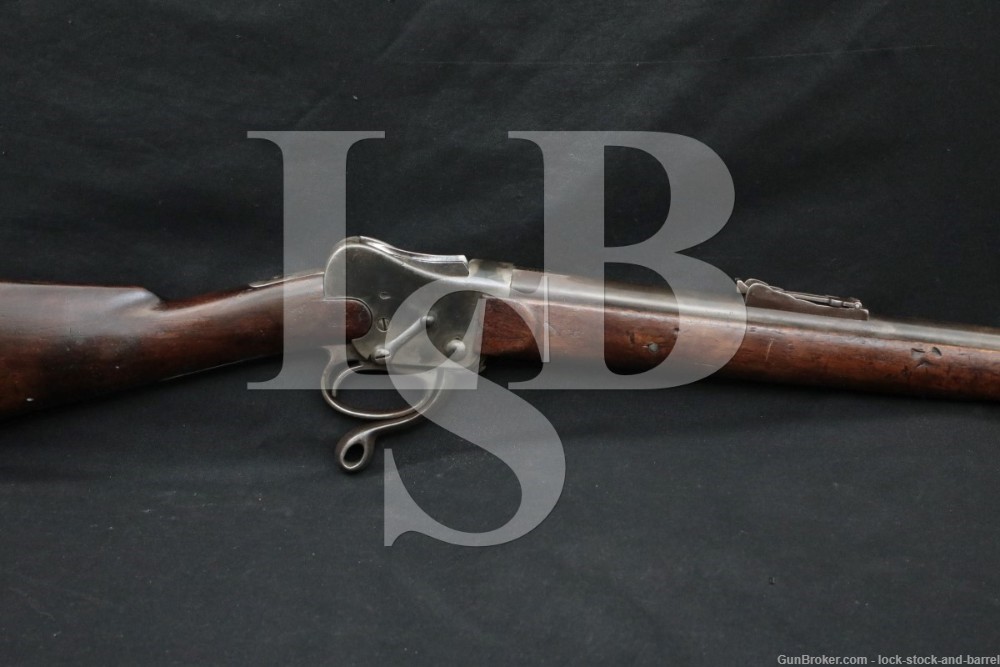 Caliber: We believe the barrel is chambered for a form of the .500/450 cartridge with a 2 1/4″ case. The chamber should be cast to confirm prior to firing.

Stock Configuration & Condition: The stocks are two-piece smooth walnut with a nosecap, barrel band with sling swivel, straight wrist, straight comb, swing swivel in the belly and steel buttplate with trapdoor storage compartment. The trapdoor has been made from a bicentennial half-dollar. The forend is slotted for a cleaning rod, but none is present. There are scattered nicks, dings, scuffs and scratches. There is a more notable scrape on the left of the forend behind the barrel band. There is a loss along the edge of the cleaning rod slot. There is a repaired break in the buttstock across the left side with fills on each side of the wrist, on each side below the comb, and one more further back on the left side. The LOP measures 13 3/4″ from the front of the trigger to the back of the buttplate. The buttplate has scattered wear and surface oxidation with some areas gone to a moderate-dark patina. Overall, the stocks are in Good condition as refinished and repaired Antique.

Bore Condition: The bore is light gray with well defined Henry-style rifling. There is minor erosion scattered through the bore with infrequent minor pitting, mostly toward the muzzle-end.

Overall Condition: This rifle retains about 50% of its current metal finish. Remaining finish is mottled with wear and areas gone to a light patina. The surfaces show treatment with cold blue. There are scattered nicks, scuffs and scratches, most notable on the barrel in front of the knox and at the rear of the breech-block. There is infrequent surface erosion and some light surface oxidation. The action shows operational wear. The screw and pin heads show tool use but remain serviceable. The markings are clear. Overall, this rifle is in Very Good condition as Antique.

Mechanics: The action functions correctly. It has a safety on the right side of the receiver. We did not fire this rifle. As with all used firearms, a thorough cleaning may be necessary to meet your maintenance requirements.

Our Assessment: Although commonly referred to as the “Improved Martini”, the Westley Richards’ Model 1869 action actually pre-dates the Martini action used in Britain’s Martini-Henry Service Rifles. When the British adopted the Martini-Henry as a Service Rifle, they actually had to pay Westley Richards because the Martini design infringed on four of Richard’s patents. Also, in parallel with the British government, Richards developed their own cartridges for use with their rifles, starting with the No. 1 Case in 1869 and the one-tenth inch longer No. 2 Case in the 1871-1872 period. The No. 2 case is also known as the .500/450 Musket round. This WR M1869 rifle is chambered for a 500/450 variant which uses a 2 1/4″ case. It is in about Very Good overall condition as Antique, showing wear consistent with use in the field as well as a repaired break across the buttstock. The bore is good, especially considering its age, and the mechanics are strong. This rifle will make a fine addition to any collection of Martini or Westley Richards rifles. Please check out our photos and good luck in your bidding!