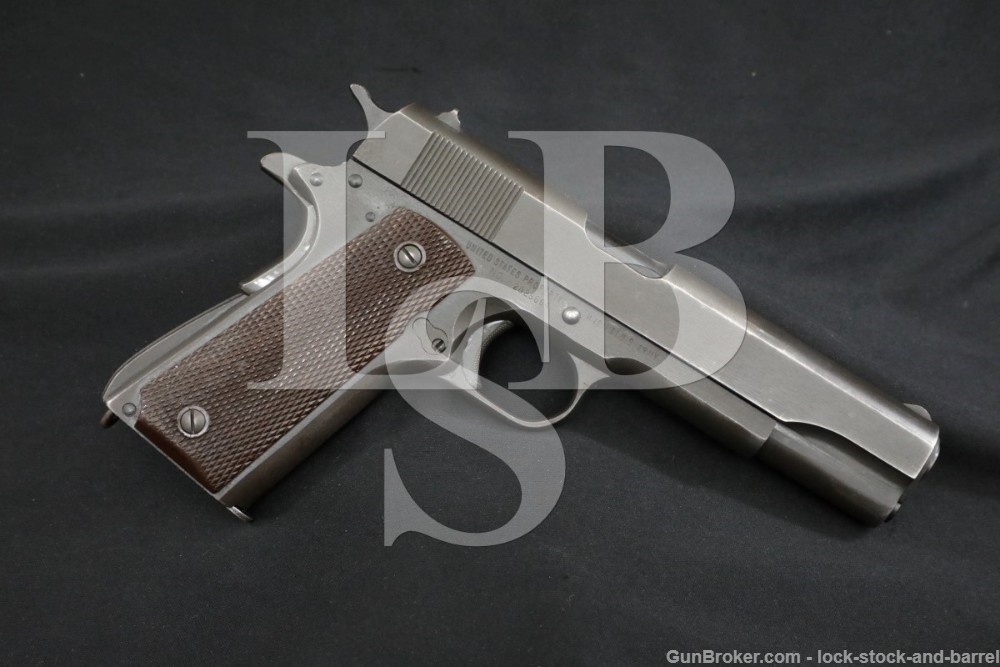 Bore Condition: The bore is mostly bright with sharp rifling and no erosion.

Overall Condition: This pistol retains about 85% of its current metal finish. The finish is thinning at all edges. There is some scattered light finish wear, mostly on the top of the slide and grip areas. There is some scabbing and light erosion on the left side of the slide at the front. There is an “idiot mark” below the slide stop and lightly on the slide. There are a few other scattered marks and scuffs. There are a few little spots of discoloration from previous oxidation, mostly on the front strap and on the right of the slide behind the serrations. The action shows operational wear. The screw heads range from sharp to tool marked with strong slots. The markings are generally clear but the Ordnance wheel is incomplete (as is common). Overall, this pistol is in about Very Good condition as refinished.

Box, Paperwork & Accessories: Included is one 7-round magazine with no markings.

Our Assessment: The 1911 and 1911-A1 pistols served the military of the United States from 1911 to 1985, through two World Wars and the Korean and Vietnam wars. They gained a reputation as a reliable handgun with plenty of stopping power, and are held in high regard by those who have used them. This example was made by Remington Rand in 1944. It is in Very Good condition, retaining about 85% of its new parkerized finish, a good bore and strong mechanics. This would make a nice addition for a collector, but it should also prove to be a great shooter. Please see our photos and good luck!