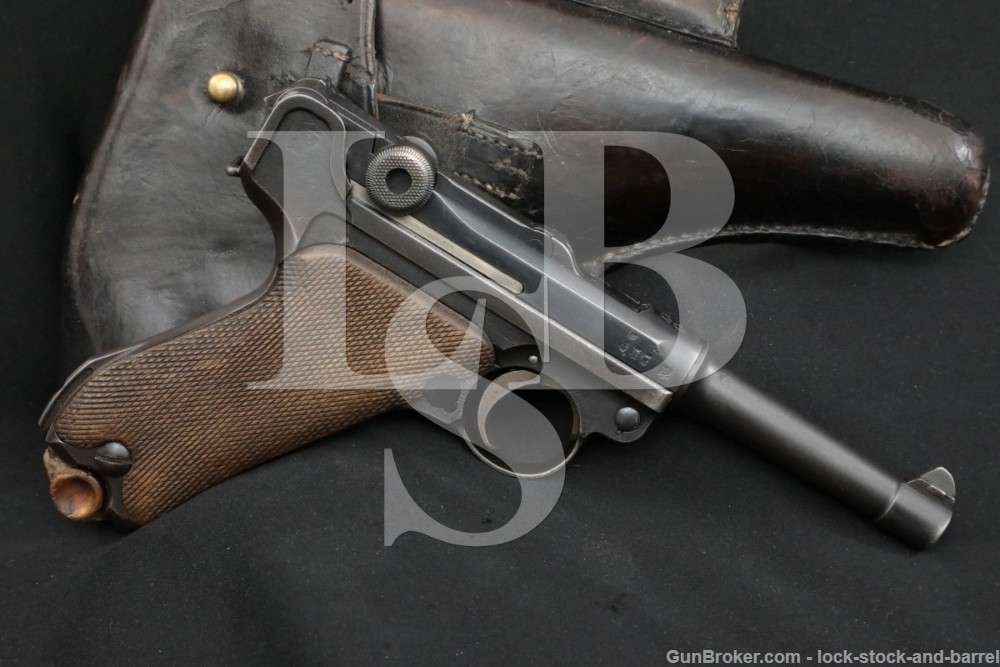 Make: The toggle is marked DWM, but based on Imperial Army inspection marks on other parts, we suspect that the frame and barrel assemblies were originally made by Erfurt Imperial Arsenal.

Stock Configuration & Condition: The grips are two-piece checkered walnut panels. The grips show moderate wear with some losses on the edges of the left panel. The left panel has buildup of some sort of adhesive or wood-fill to fit the frame. There are some nicks and scuffs. Most checkering is well defined, though the points are blunted. Overall, the grips are in Good condition as not original to the gun.

Overall Condition: This pistol retains about 80% of its current metal finish. The finish is thinning at all edges. There is handling wear in the grip areas and the controls. There is some wear on the left-front of the barrel, the fronts of the frame rails and the sideplate. Most worn areas show discoloration from oxidation and there is infrequent scattered minor surface oxidation. There are some light nicks, scuffs and scratches. There is some scattered minor erosion under the finish. The action shows operational wear. The screw heads are tool marked with strong slots. The markings range from clear to worn, but legible. Overall, this pistol is in about Very Good condition as refinished.

Box, Paperwork & Accessories: This pistol comes with a leather flap-holster and a single magazine. The magazine’s wood floorplate has broken and been repaired. The magazine shows scattered surface oxidation, wear and minor erosion with intact feed lips and a strong spring. The holster has scattered wear, discoloration and cracking. The flap’s retaining tab appears to be a replacement, but the stitching is otherwise intact.

Our Assessment: The Luger was adopted by the German Army in 1908 and was so reliable and well liked that it was still being made and issued to German troops well after the P38 was adopted by the army in 1938. The largest percentage of Lugers were made by DWM, which became Mauser in 1930. This is a Luger pistol manufactured in 1917 which remained in German inventory following the Great War. Its “1920” marking on the chamber ring is a reference to compliance with the severe restrictions placed on Germany by the Treaty of Versailles. The toggle train has a DWM marking, but we suspect that the rest of the pistol was produced by Erfurt with the serial markings of the toggle train force-matched. It has survived the last century fairly well, in about Very Good condition, with 80% of its new blued finish remaining. For fans of the Luger or WWII small arms, this DWM Luger will make a neat addition to a collection and may still be a fun shooter. Please see our photos and good luck!