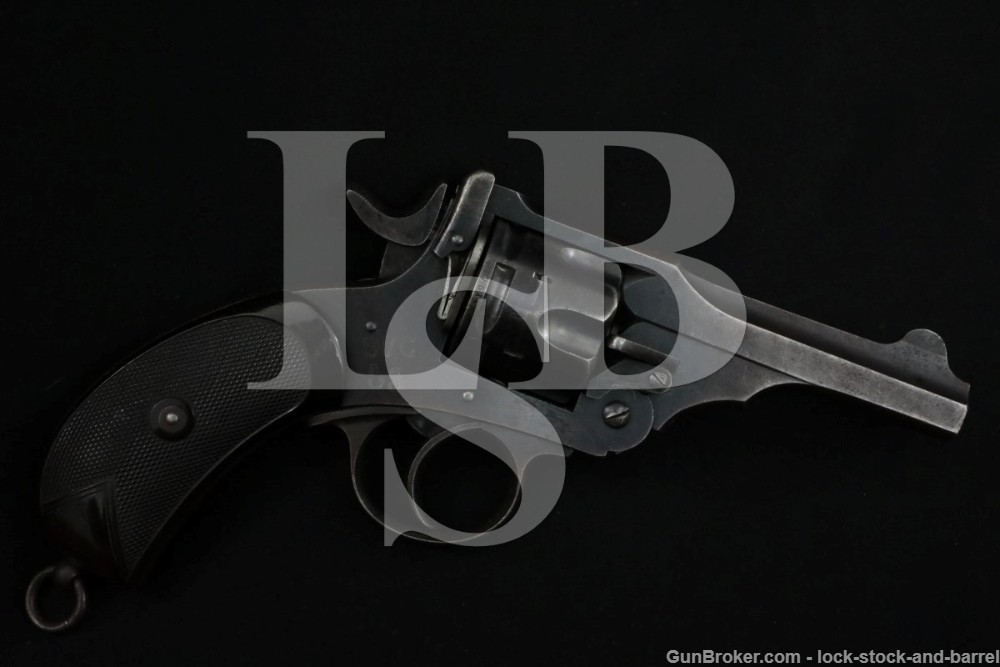 Stock Configuration & Condition: The grips are checkered black hard rubber panels. There is a lanyard ring on the bottom of the grip. There are scattered little nicks and scratches on the smooth borders. The checkering is generally sharp and has very light discoloration. There are no chips or cracks. Overall, the grips rate in about Fine condition as Antique.

Bore Condition: The bore is bright with well defined rifling. There is light erosion at the muzzle.

Overall Condition: This handgun retains about 40% of its current metal finish. There is thinning at the leading edges as well as tiny nicks and dings. The barrel and sides of the frame show a light patina with surface oxidation. The grip straps show a darker patina and surface oxidation. The cylinder shows similar imperfections and a distinct turnline. The screw heads range from sharp to tool marked with strong slots. The markings are generally clear, some are worn, but legible. Overall, this revolver is in about Very Good condition as Antique.

Mechanics: The action functions correctly. The barrel locks up tightly. The cylinder locks up with barely perceptible play when the trigger is depressed. The double action is smooth. We did not fire this handgun. As with all used firearms, a thorough cleaning may be necessary to meet your maintenance standards.

Our Assessment: P. Webley and Son received their first contract to produce the hinged frame Mark I revolver for the British Government in 1887. From lessons learned with this revolver and from their W.G. line of commercial revolvers, continual improvement in the design occurred. The Webley Mark III was sealed on October 5th, 1897. Several new features were introduced for the first time on this pattern, including a completely new barrel unit and cylinder assembly to replace the versions used on the Mark I and Mark II revolvers. It has some later features such as the screw-secured cylinder cam and hammer-mounted firing pin. The revolver is in about Very Good condition as Antique, operating properly in both single and double action. Despite our research efforts, we could not determine the meaning of the marking “SVC / 53” on the right side of the frame. This revolver would make a fun research project for any Webley enthusiast out there. Please see our photos and good luck!