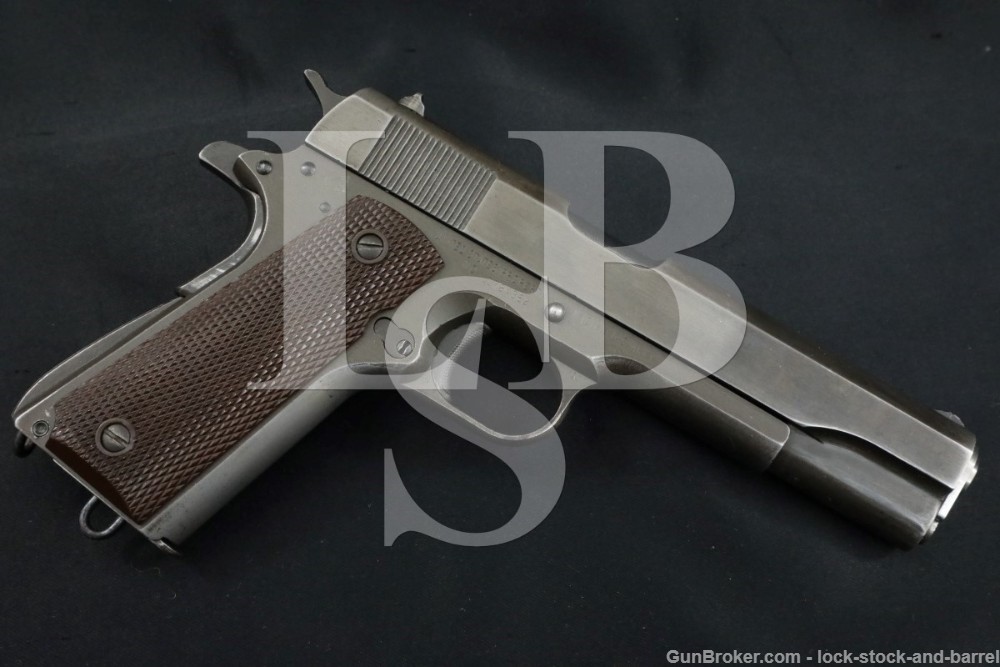 Finish Originality: There are areas of original finish but the surfaces have been treated with cold blue. The barrel bushing and barrel are replacements.

Overall Condition: This pistol retains about 70% of its metal finish. The barrel and barrel bushing are replacements. The remaining parkerized finish is on the sides of the frame. The slide and bottom of the dust cover have been treated with cold blue. The frontstrap has been polished. There are some streaks on the slide from refinishing and a few little nicks. The slide has mottled discoloration. There are some spots of pinprick erosion on the slide there is some more noticeable erosion on the bottom of the slide at the muzzle. The grip safety has some spots of light scabbing. There are some spots of discoloration from previous oxidation, most noticeable on the front strap. There is an “idiot mark” below the slide stop. The front sight has some marks and both signs have black paint. There are a few other scattered light marks. The action shows operational wear. The screw heads are sharp to lightly worn with strong slots. The markings are generally clear, but the Ordnance wheel is incomplete (as is common). Overall, this pistol is in about Very Good condition.

Our Assessment: The 1911 and 1911-A1 pistols served the military of the United States from 1911 to 1985, through two World Wars and the Korean and Vietnam wars. They gained a reputation as a reliable handgun with plenty of stopping power, and are held in high regard by those who have used them. This example was made by Remington Rand in 1944. It is in Very Good condition, retaining about 70% of its current finish, a good bore in its replacement barrel, and strong mechanics. This would be a nice shooter and will serve you just as well as it did America’s men in uniform. Please see our photos and good luck!