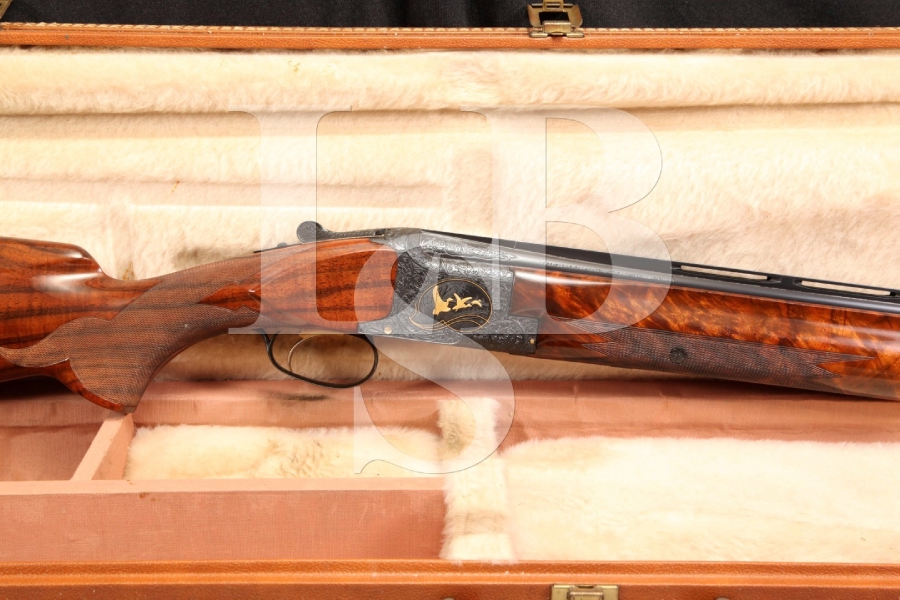 Sights / Optics: This shotgun is the BROADway Trap model and is mounted with a 5/8” wide ventilated rib with two white colored beads; One mounted at the muzzle and a smaller one mounted mid-rib.

Stock Configuration & Condition: The stocks are marble grain walnut with Exceptional Midas Grade Checkering. The checkering has a more elaborate design than lower grade models. There are only a couple of light compression marks on the buttstock along with faint handling marks. There is one black and one white spacer in front of the still pliable Browning recoil pad. The forend shows only light handling marks and a few very light compression marks. The drop at heel measures 1 ½” and the drop at comb measures 1 3/8”. The LOP measures 14 ½” from the front of the gold trigger to the back of the recoil pad. The stocks rate in about Fine overall condition.

Overall Condition: This shotgun retains about 98% of its metal finish. The balance of the finish shows light marks on the barrel beneath the forend. There are only the faintest of handling marks on the visible sections of the shotgun. The screw heads are Sharp. The markings are Clear. Overall, this shotgun rates in about Excellent condition.

Mechanics: The action functions Correctly. We have not fired this shotgun.

Box, Paperwork & Accessories: This shotgun comes in a brown/orange leather Browning case. The interior of the case has some oil staining. It is very sound and the padding remains in good condition. The exterior of the case could use a bit of cleaning with leather conditioner. The case overall rates in about Very Good Condition.

Our Assessment: The BROADway Trap takes its name from what was at the time an unusually wide ventilated rib, in fact over half an inch wide. Since the Midas Grade was the best of the production high grade Superposed, It received the finest treatments. The firing pin tips are gold plated, and the hunting scenes were inlaid in 18 carat gold against a specially blued and deeply carved background. No two scenes were exactly the same. Between 1960 and 1969, over one thousand Midas Grades were sold by Browning in the North American Market. It was difficult to meet the demand due to the lack of experienced engraving inlay specialists. One or two inlay experts could not produce enough Midas Grades as each shotgun took approximately 60 hours of work to execute. FN engravers had the opportunity to earn extra money by working on the Midas Grades at home during their own time. They were paid less than at the factory but paid no taxes on the offsite work. Usually those engraved outside of the factory will have no engraver’s signature. This one does have E. Theunens’ signature so it was likely engraved in the factory. This shotgun came from a collector who had pride of ownership and kept his guns in Fantastic condition. This will not disappoint the collector or the discerning trap shooter.