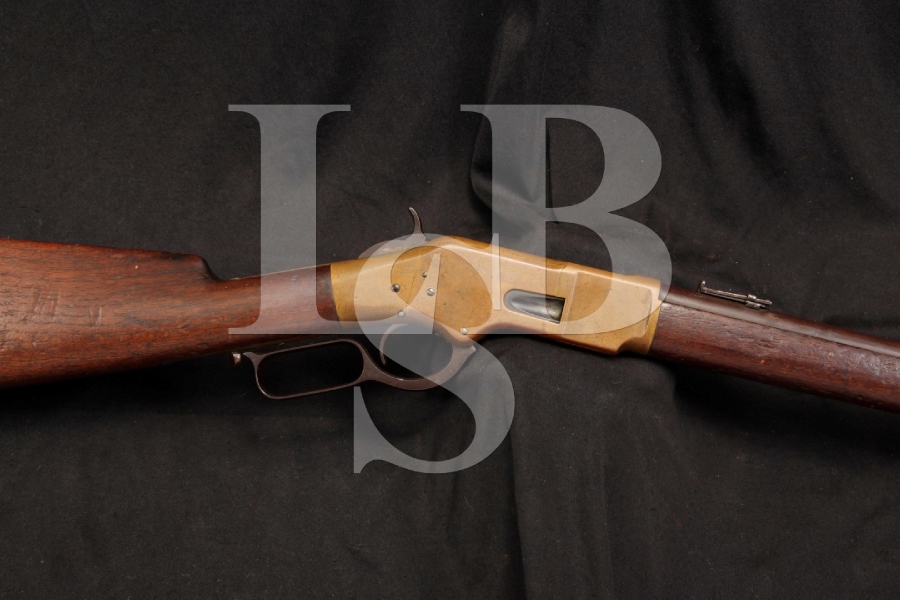 Barrel Length: The round barrel is 20” in length.

Stock Configuration & Condition: The stocks are two piece walnut with an oiled finish. The butt stock has a carbine style steel buttplate with a smooth straight grip, and the half-length forend has a single barrel band. There is a trapdoor in the buttplate for storage of extra rounds. The forend tip is square – there is no provision for a steel nose cap. Overall, the wood fits the metal well. The butt stock shows numerous compression marks with several deep marks along the comb and on the right side of the stock. Both sides of the butt stock show several small cracks at the butt, with a single long crack on the right side that extends about 8” forward and a crack on the left side that extends about 2 ½” forward from the butt. All of the cracks appear to be stress cracks along the grain. The forend shows numerous compression marks on both sides with a chip/gouge on the top left edge just behind the barrel band and several small chips/gouges near the top right side at the front of the rear sight. The buttplate has developed a brown patina and shows light compression marks and a few spots of corrosion. It is in about Good condition. The stocks rate in about Good overall condition.

Bore Condition: The bore is gray and the rifling is shallow. There is light erosion near the muzzle.

Overall Condition: This rifle retains about 0% of its metal finish. All of the steel surfaces have developed a plumb colored patina and the brass receiver shows a mustard patina. The patina in the brass has a crystalline structure which can only be achieved by age. The right front corner of the barrel shows a compression mark and light pitting. The barrel bands show thinning and small compression marks on their sides, the front band shows corrosion on its top and the band around the forend shows corrosion on its bottom. The barrel shows corrosion around the barrel bands, rear sight and at the receiver and a few spots of thinning under the patina. The barrel also shows small compression marks along its length with a deep mark in front of the forend band and multiple marks on either side of the rear sight. The magazine tube shows a few marks through the finish under the patina, and a few small compression marks and spots of corrosion. The receiver shows a few light scratches and marks under the tarnish. The left side plate fit is Excellent and may have never been removed. The lever shows one or two spots of corrosion, some very light pitting and a very few marks. The hammer checkering shows light wear and the rear border is slightly disfigured. The screw heads are disfigured except for the top tang screw and the two spring screws on the underside of the receiver, which are sharp. The markings are thin in spots but readable. Overall, this rifle rates in about Very Good condition.

Mechanics: The action functions correctly, but the hammer is a little stiff, making the lever opening stiff as well. The hammer has a half-cock position. We have not fired this rifle.

Box, Paperwork & Accessories: The saddle ring is attached to its loop on the left side of the receiver.

Our Assessment: Per Wikipedia: “The first Winchester rifle – the Winchester Model 1866 – was originally chambered for the rimfire .44 Henry. Nicknamed the “Yellow Boy” because of its receiver of a bronze alloy called gunmetal, it was famous for its rugged construction and lever-action mechanism that allowed the rifleman to fire a number of shots before having to reload: hence the term “repeating rifle”.” The Model ’66 was chambered in .44 Rimfire, pushing a 200 grain lead bullet at about 1125 ft/sec. The low velocity and poor ballistic coefficient of the bullet used pretty much limited its range to about 150 yards for use as a military round or for medium sized game. Still, the ability to fire 12 or more cartridges without reloading, even in the carbine, made it very attractive to those settling the west after the Civil War. This saddle ring carbine has developed a plum patina over most of its blued steel finish with a crystallized mustard patina on the brass receiver. There is no doubt that this is its original finish. The barrel has a fairly deep compression mark in front of the forend band and a few spots of corrosion. Overall, this carbine is in Very Good condition. The rifling is a shallow with light erosion near the bore, but still very shootable. This rifle is bound to attract the interest of the Winchester collectors out there and to those who are interested in having a piece of American History in the West.