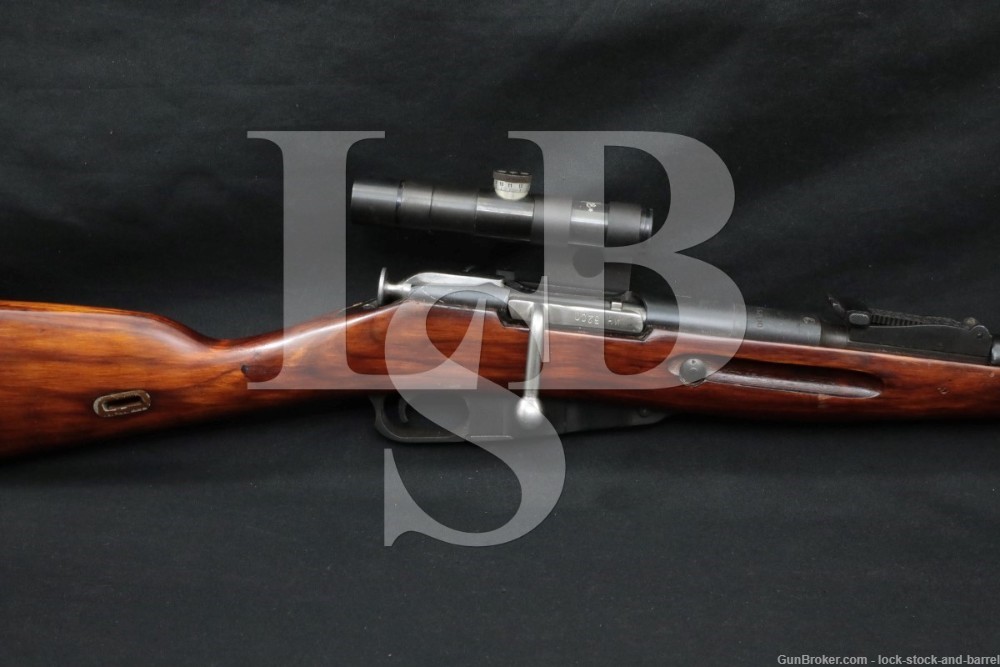 Markings: The importer’s stamp is at the bottom of the barrel by the muzzle “INTER ORDNANCE, MONROE NC / M91/30, RUSSIA 7.62X54R”. The top of the receiver has been marked with the importer’s serial number “NH3222”. The remaining markings are in Cyrillic and have been romanized.  The barrel shank has Izhevsk markings including “S” inside a circle, “O” inside a circle, a faded hammer and circle surrounded by wheat, “1943G” (1943 Goda, the year 1943), the original serial number “IN3200”, an Izhevsk arrow inside a triangle and “31931” on the left side of the shank which is serial matched to the attached scope. The base of the rear sight is marked with a faded Izhevsk proof. The magazine is marked with a Tula star and has been marked with the serial number “IN3200”. The buttplate has an Izhevsk proof and has “IN3200” marked on it. The bolt features the serial number “IN3200” and Izhevsk proof marks. The bent-bolt features a longer handle specific to the sniper variant of the m91/30. The barrel bands have Izhevsk proof marks. The right side of the forend is marked “2”. The right side of the wrist is marked “Yu”. The right side of the butt has a few faded cartouches. The bottom of the wrist is marked “4” in a diamond, “OTK” which is an abbreviation for the quality control department and has a faded cartouche. The bottom of the forend is marked “7”, features an “O” inside a diamond and an “E”. The right side of the butt features a “B” and a few faded cartouches.

Sights/ Optics: The front sight is a dovetailed post on a ramp with a protective hood. There is also a tangent leaf rear sight with a “U”-notch which is graduated in 100s of meters from 1-20, inclusive. There is also a PU (Pritsyel Ukorochyennyy which translates to shortened sight) 3.5×21 scope which has been screwed onto the left side of the receiver. The scope features the rifle’s serial number “IN3200” on its base while the top of the scope is marked with a hammer and sickle under a star, the date of manufacture “1943” and the serial number “No 31931”. The scope is adjustable and features a German style reticle, the reticle is sharp and the glass is clear. The scope has some handling wear which includes small scratches, nicks and scuffs. Overall, the scope is in Very Good condition.

Stock Configuration & Condition/ Grip: The arsenal refurbished stocks are two-piece wood featuring a forend that has a cap, a slot for the included cleaning rod, two barrel bands and their springs, a sling eyelet with a washer, a through bolt and a forend grip. The buttstock has a straight wrist, straight comb, sling eyelet with washer and a metal buttplate.  The stocks have some small scrapes, nicks, scratches and more general handling marks. Notably, there is a small scrape on the left side of the butt, a scrape on the right side of the forend in front of the through bolt and some nicks on top of the forend grip. There are no chips or cracks. The LOP is 13.5” from the trigger to the rear end of the buttplate. The buttplate has some handling wear and the finish on the top leading edge has worn off. Overall, the stocks are in Very Good condition.

Overall Condition: The rifle retains about 90% of its metal finish. There are some light handling marks, scratches, nicks and scuffs in addition to some light oxidation visible in some protected parts of the rifle. Although some of the markings have faded, most remain clear. The screwheads are serviceable. Overall, the rifle is in Very Good condition.

Box Paperwork and Accessories: There is a scope which is described in the sights/optics section above.

Our Assessment: This Izhevsk Mosin Nagant model 1891/30 Sniper PU is a bolt-action rifle that takes 7.62x54mmR rounds. The rifle has features unique to the sniper variant of the M91/30 including a longer bent-bolt handle and the PU scope which is serial matched to the rifle. The M91/30 was the most widely produced variant of the Mosin Nagant rifle and it saw service in a number of conflicts including a clash against the Japanese during the Battle of Khalkhin Gol in 1939, the Winter War against Finland in 1940 and the Great Patriotic War (WWII). The rifle was used to great effect during the battle of Stalingrad by soviet marksmen. Notably, Vasily Grigoryevich Zaitsev dispatched over 200 German troops, including a number of snipers, with his M91/30 during the epic battle. Following WWII, the sniper variant of the M91/30 was retired in the Soviet Union but it would continue to see service throughout the Cold War by its allies. This rifle is a unique WWII vintage sniper rifle you do not want to miss out on!