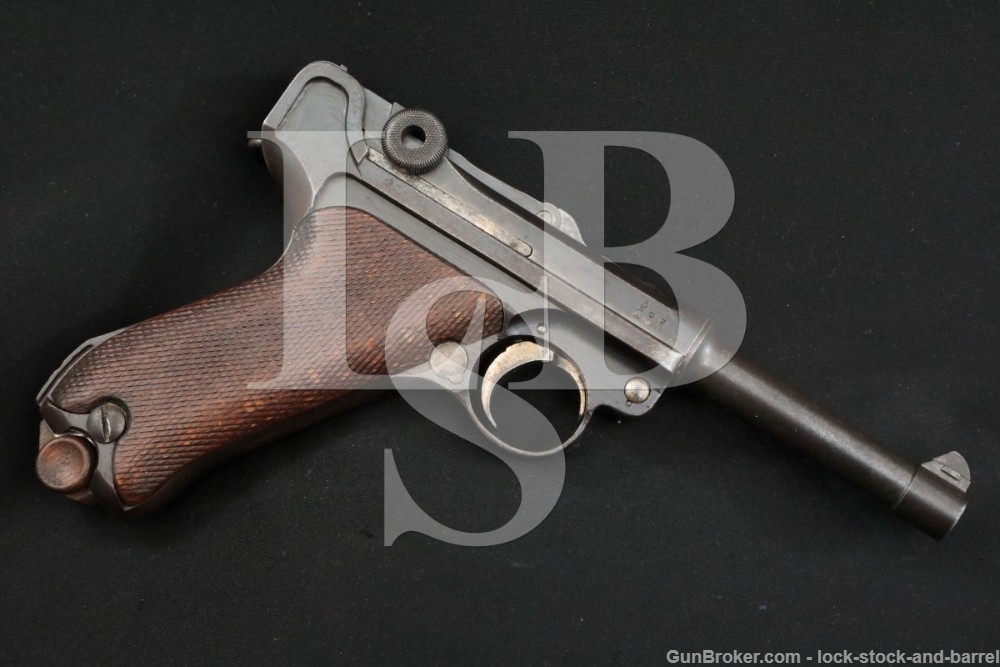 Stock Configuration & Condition: The grips are two-piece checkered wood. They have fairly evenly distributed light-moderate handling wear. There are some light nicks and scuffs. The checkering is generally well defined, but the points are blunted. The serial markings inside the grips are not legible, but based on the fit we suspect they are replacements. There are no chips or cracks. Overall, the grips are in Good-Very Good condition.

Bore Condition: The bore is gray, with well defined rifling. There is light erosion scattered throughout the bore with some more moderate erosion in the grooves.

Overall Condition: This pistol retains about 65% of its metal finish. The finish is thinning at all edges. The strawed parts have mostly worn to white. There is scattered finish wear, most notable in the grip areas, barrel and sideplate. The worn areas show light surface oxidation and some minor erosion, with some other scattered light oxidation. There are scattered nicks, scuffs and scratches. The action shows operational wear. The screw heads are tool marked with strong slots. The markings are generally clear, the unit marking is poorly struck, though heavily, denting the frontstrap. This does not interfere with insertion or removal of the magazine. Overall, this pistol is in about Good condition.

Mechanics: The magazine does not properly engage the bolt stop when the slide is assembled, but the stop does engage when the barrel assembly is removed. Otherwise, the action functions correctly. The receiver is tight to the frame. We did not fire this pistol. As with all used firearms, a thorough cleaning may be necessary to meet your maintenance standards.

Box, Paperwork & Accessories: This pistol comes with a single 8-round magazine with wood floorplate. Based on condition and lack of markings, it is likely a reproduction. The magazines shows minor wear with intact feed lips and a strong spring.

Our Assessment: The Luger (Pistole Parabellum or P-08) is perhaps the most aesthetically and ergonomically pleasing of all autoloading centerfire pistols. It is also one of the strongest, most accurate and most recognizable service pistols ever made. Georg Luger developed his famous pistol in 1898-1899 (starting with the Borchardt/Luger transitional pistol). The Luger is, essentially, a much improved Borchardt type pistol, which was itself based on the toggle action concept used by Sir Hiram Maxim in the world’s first practical machine gun. The Maxim shot its way to bloody fame in World War One, which also became the combat proving ground for the Luger Pistol. The Luger was so well liked and reliable that it was still being made and issued to German troops well after the P38 was adopted by the army. This Erfurt Arsenal made Luger was made in 1918 and all of the serial numbers on the metal parts of the pistol are matching. The proof and inspection marks are correct for a 1918 Erfurt military issue pistol, specifically one which was approved by the Revisions-Commission. As 1918 wore on, hope was lost for the Imperial German Army and certain standards were loosened to increase production and get more arms to soldiers in the field. Finish was rougher, cosmetic or non-essential tolerance flaws were overlooked, and the Revisions-Commission would approve some pistols which had previously been turned down by inspectors. This pistol is in about Good condition with about 65% of its original finish remaining. The bore is gray with well defined rifling and light-moderate erosion scattered throughout the bore. The receiver is tight to the frame and the pistol is in good mechanical condition for being over 100 years old, though the included magazine doesn’t reliably engage the bolt stop. This is a nice find for Luger collectors and those with an interest in German military arms as used in WWI and WWII. Please see our photos and good luck!