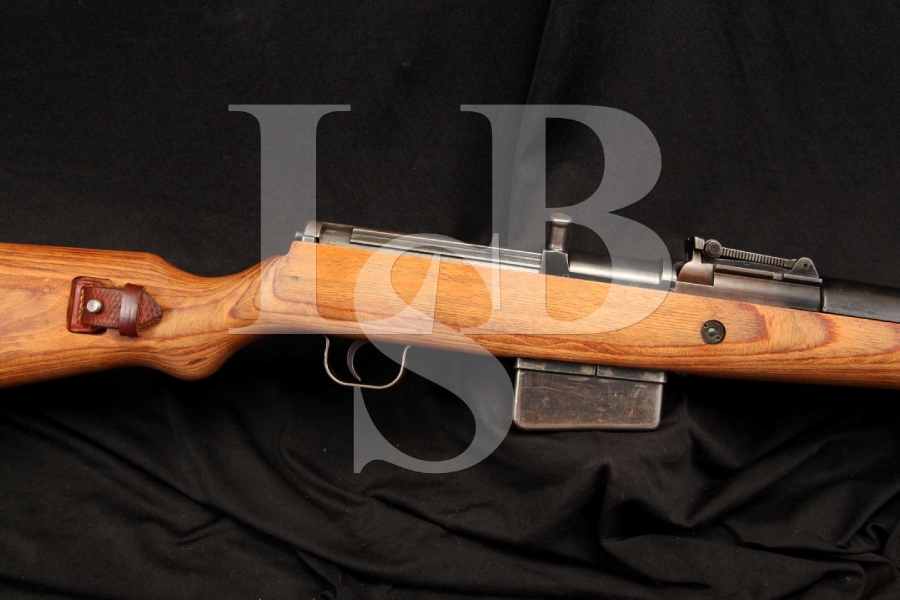 Sights / Optics: The front sight is a hooded post set atop a raised base. The rear sight is a “U” notched sliding elevator marked from “1-12”.

Stock Configuration & Condition: The two piece, laminate stock has a synthetic upper handguard, pistol grip, sling well with pass through, metal through bolt, nose cap, barrel band with sling loop, cleaning rod and a metal buttplate. The wood appears to have been sanded and given a light oil finish. The inside of the upper hand guard shows a thin 5” crack. Both sides of the lower handguard show scrapes from the barrel band being removed. There are a few other light compression and handling marks. The LOP measures 13 ¼” from the front of the trigger to the back of the buttplate. The stock rates in about Fine overall condition, as refinished.

Bore Condition: The bore is dark and the rifling is deep. There is erosion.

Overall Condition: This rifle retains about 80% of its metal finish. The front sight hood and nose cap are darker than the rest of the rifle. The gas trap apparatus covering the front of the barrel is faded and shows light scratches and marks. The balance of the finish shows light scratches and marks as well as fading. The magazine shows deeper marks. The buttplate shows scratches, wear and light pitting. The screw heads show use. The markings are deep. Overall, this rifle rates in about Very God to Fine condition.

Box, Paperwork& Accessories: The rifle comes with a brown leather sling that shows wear. It is in about Very Good condition.

Our Assessment: This Gewehr 41 by Walther is a great looking piece of history. It has great markings (most of which match) and a good looking stock. Some history from Wikipedia: “By 1940, it became apparent that some form of a semi-automatic rifle, with a higher rate of fire than existing bolt-action rifle models, was necessary to improve the infantry’s combat efficiency. The Wehrmacht issued a specification to various manufacturers, and Mauser and Walther submitted prototypes that were very similar. However, some restrictions were placed upon the design: no holes for tapping gas for the loading mechanism were to be bored into the barrel; the rifles were not to have any moving parts on the surface; and in case the auto-loading mechanism failed, a bolt action was to be included. Both models therefore used a mechanism known as the “Bang” system (after its Danish designer Søren H. Bang). In this system, gases from the bullet were trapped near the muzzle in a ring-shaped cone, which in turn pulled on a long piston rod that opened the breech and re-loaded the gun. This is as opposed to the more common type of gas-actuated system, in which gases are tapped off from the barrel, and push back on a piston to open the breech to the rear. Both also included inbuilt 10-round magazines that were loaded using two of the stripper clips from the Karabiner 98k, utilizing the same German-standard 7.92×57mm Mauser rounds. This in turn made reloading relatively slow. The Mauser design, the G41(M), failed. Only 6,673 were produced before production was halted, and of these, 1,673 were returned as unusable. Most metal parts on this rifle were machined steel and some rifles, especially later examples, utilized the Bakelite type plastic handguards. The Walther design was more successful because the designers had simply ignored the last two restrictions listed above…. G41(W) rifles were produced at two factories, namely Walther at Zella Mehlis, and Berlin Luebecker. Walther guns bear the AC code, and WaA359 inspection proofs, while BLM guns bear the DUV code with WaA214 inspection proofs. These rifles are also relatively scarce, and quite valuable in collector grade. Varying sources put production figures between 40,000 and 145,000 units. Again, these rifles saw a high attrition rate on the Eastern front.” For a video on taking the G41 apart see: http://www.youtube.com/watch?v=m38NQLwpQgo#t=85.