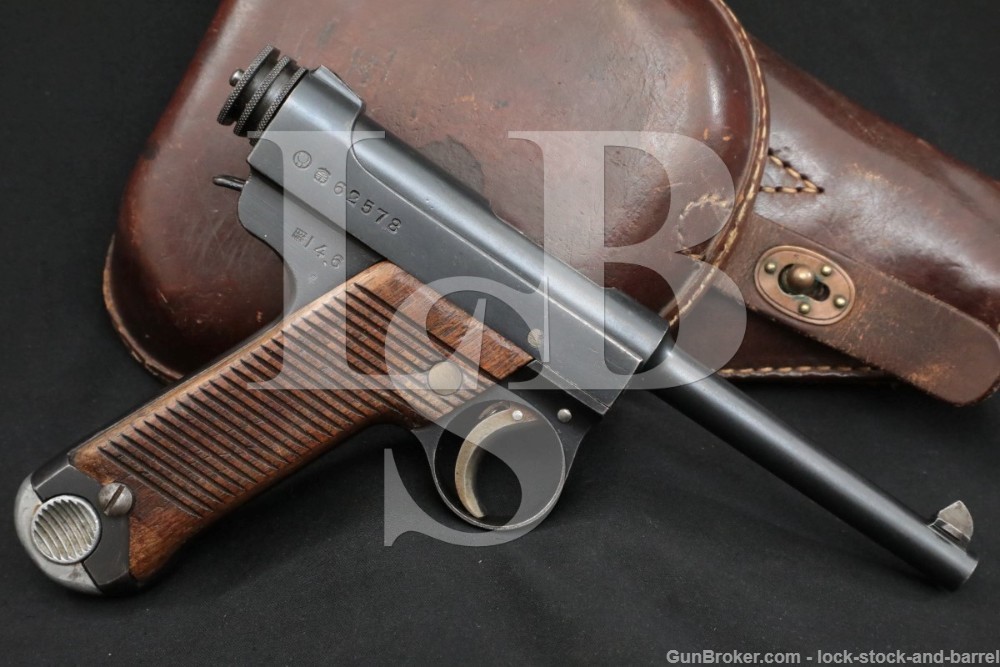 Markings: The left side of the frame has 4 Japanese characters (model designation). The right side of the frame has a Nagoya Arsenal symbol, followed by the Japanese character for “NAM” (for Lt. Gen Kijiro Nambu, one of the founders of the Nambu Rifle Manufacturing Company, the predecessor to Chuo Kogyo). This is followed by the serial number “62578”. Below these marks on the frame are the Japanese character for “Showa” followed by the date code “14.6” and another Japanese symbol, which was a final inspection mark. The inside surfaces of both grip panels have “378” hand-written in pencil, being off by only one digit this may have been a factory error. The top of the bolt in front of the cocking knob, the front face of the magazine safety, the top of the trigger guard, the left of the trigger, the front of the cocking knob, the bottom of the barrel assembly, the front face of the locking block, and the outside of the magazine release button are marked “578”. The spine of one magazine is marked “578” with a dot, “N” and with a Japanese symbol. The other magazine’s spine is marked “530” and “N”.

Stock Configuration & Condition: The grips are slab sided wood with 25 horizontal serrations each. The grips have some scattered light nicks, scratches, and general light handling wear. There is some more notable wear at the bottom edges of the panels, an arc of wear at the top of the left panel from the safety lever and wear around the magazine catch on the left panel. Each panel has minor play to the frame due to the mounting screws. The screws start threading into the frame properly and after a few revolutions, the heads take on a notable swivel and stop before seating all the way against the grip panels. There are no chips or cracks. The serrations are well defined. Overall, the grips are in about Good condition as possibly not original to the gun.

Type of Finish: The pistol is blued. The trigger, magazine release, and safety have a straw colored finish.

Bore Condition: The bore is mostly bright and the rifling is well defined. There is infrequent minor erosion in the bore.

Overall Condition: This handgun retains about 94% of its metal finish. The finish is thinning at some edges. There are some scattered nicks, scuffs and scratches, most notable in the front of the trigger guard where there is also some minor surface erosion. There is infrequent scattered minor surface oxidation. The action shows light operational wear, including an arc of wear from the safety lever. The controls have handling wear. The screw heads are tool marked with strong slots. As noted in the Grip section, the screws start threading into the frame properly and after a few revolutions, the heads take on a notable swivel and stop before seating all the way against the grip panels.. The markings are clear. Overall, this pistol is in about Very Good-Fine condition.

Mechanics: The action functions correctly. The barrel assembly is tight to the frame. We did not fire this handgun. As with all used firearms, a thorough cleaning may be necessary to meet your maintenance standards.

-Total of two magazines, one serial-matching and one non-matching.

Our Assessment: This is a Nambu Type 14 pistol made by the Chuo Kogyo Co. (branch of the Nagoya arsenal) in May 1937. The Type 14 was built between 1925 and 1945 for the armed forces. This example was made during the 2nd Sino Japanese War but before the outbreak of the WWII which would begin a couple of months later with Germany’s and later the Soviet Union’s invasion of Poland. This example comes with a leather clam-shell holster, cleaning rod and a pair of magazines, though only one magazine is serial-matched to the pistol. Apart from the grips, all of the serialized parts match and the grips are off by only one digit, the same digit on each, and may have been installed by error at the factory. The pistol was made before some updates were made to the design, lacking the magazine retaining spring and enlarged trigger guard which would be added later in production. This is a nice example of a “wartime” Type 14 from the Japanese perspective, though it was produced prior to the outbreak of the worldwide conflict of the next six years. Please see our photos and good luck!