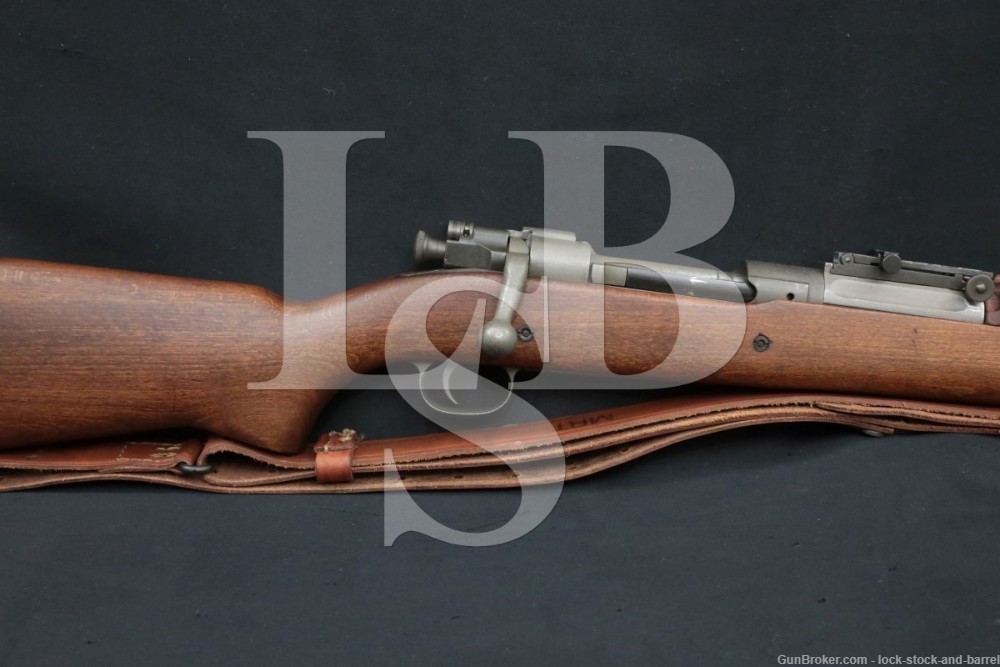 Sights / Optics: The front sight is a pinned blade set in a raised base. The rear sight is a “U” notched blade attached to a fully adjustable sight ladder marked from “3-27”. When flipped up separate notches and an aperture on the ladder can be used for sighting.

Stock Configuration & Condition: The two piece hardwood stock has a pistol grip, metal nosecap with bayonet lug, stacking loop, barrel band, two sling loops, two through bolts and a metal buttplate with hinged door for storage. The refinished nosecap has surface erosion showing through the finish. The wood shows several scrapes & scratches that have been oiled over. Most of the marks are light. The LOP measures 13 1/8 inches from the front of the trigger to the back of the buttplate. The stock rates in about Very Good Plus to Fine overall condition as refinished.

Bore Condition: The bore is bright. The rifling is deep & sharp. There is no erosion. The bore shows an M.E. of 0.5.

Overall Condition: This rifle retains about 96% of its metal finish as refinished. Surface erosion shows through the new finish on the receiver, bottom metal, and bolt assembly. The bolt assembly shows a freckling of discoloration from oxidation. The right side of the receiver & bolt show light thinning consistent with cycling. The barrel shows small scrapes & a few small scratches. The metal shows other light scrapes & handling marks. The screw heads show use. The markings are deep. Overall, this rifle rates in about Very Good Plus to Fine condition as refinished.

Box, Paperwork & Accessories: The rifle comes with a leather sling that shows light discoloration and light scrapes. It is in about Fine condition.

Our Assessment: This Springfield Model 1903 was made in 1918 and has a 1944 dated replacement barrel. It was around for WWII and probably saw service during that time frame. It saw service with a U.S. friendly country and is now import marked. The metal has been refinished, the wood looks good, and the bore is strong & bright. The markings on the metal are deep. The rifle comes with a rare U.S.M.C. marked barrel. This barrel was made under contract for the United States Marine Corps by Sedgley Manufacturing Company. Sedgley normally used a “circled S” marking. Barrels made for the USMC contract were specifically marked “U.S.M.C. / date / circled S”. For more see pages 164-165 of Joe Poyer’s book, The Model 1903 Springfield Rifle and its Variations, 3rd Edition.