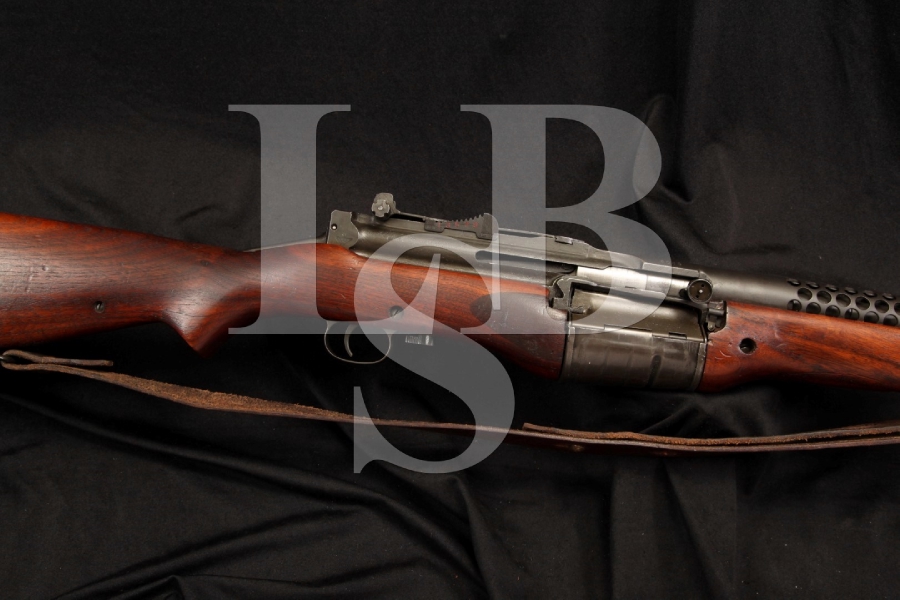 Action Type: Semi-Auto Based on Retarded Recoil System with Internal 10 Round Rotary Magazine Reloadable via Stripper Clip or Singly

Sights / Optics: The front sight is a Patridge style blade fixed to a base pinned to the barrel. The base has two military style ears which protect the sight blade. The aperture rear sight is an elevator sight that is dovetailed into the top of the receiver. The sight has a fine adjustment for windage. The sliding elevator is marked on the right side “0-1000”, “Meters” and “1 3 5 7 9” and on the left side “M2”. The flat at the rear stock bolt is marked “2”.

Stock Configuration & Condition: The stock is a two piece dark walnut consisting of a buttstock and forend. The buttstock has a pistol grip and a checkered blued buttplate. There are sling swivels mounted at the butt and on the bottom front of the handguard. The buttstock has screws going through the width of the stock behind the grip and above the front of the trigger guard, and the handguard has also has two sets of screws going through it. There are two bolts going up through the stock into the receiver at the front and rear of the receiver. The right side of the buttstock has a piece of wood added at the receiver (this is the original condition – wood stocks could not be obtained wide enough to fit the receiver.). The stock shows numerous compression marks along the top of the comb, plus several compression marks at the right rear of the forend along with a tiny chip in the rear edge of the forend. There are also several more compression marks and handling marks scattered over the buttstock and forend, including a small one on the left bottom edge of the pistol grip. The LOP measures 13 1/16” from the front of the trigger to the back of the buttplate. The buttplate shows thinning with light compression marks on the edges. The checkering shows very light wear. The buttplate is in about Fine condition. The stocks are in about Very Good to Fine condition.

Finish Originality: The rifle appears to be arsenal re-finished.

Bore Condition: The bore is bright and the rifling shows slight wear. There is light frosting in the grooves.

Box, Paperwork & Accessories: This rifle comes with a one piece dark brown leather carrying sling, a bayonet with leather scabbard and a .30-06 Springfield barrel. The end of the sling at the butt is secured by a brass stud and there is a second brass stud used to adjust the length of the sling. The sling shows a few handling marks and wear marks around the holes where the stud was positioned. It is in about Very Good condition. The bayonet has a triangular blade with blood grooves, a barrel ring and a spring loaded catch. The barrel ring is marked “2965”. The bayonet is parkerized and the edges of the blade show light wear and thinning. The hilt shows thinning on the barrel ring and on its edges, handling marks and spots of surface loss. It is in about Very Good condition. The bayonet is a little loose on the rifle – we think because the barrel has been reduced in diameter a little before it was re-finished. The dark brown leather scabbard is made from a single piece of leather that is folded over at the top and stitched to form a 2 ½” belt loop. The bayonet is secured with a leather strap riveted to the scabbard and latched with a brass stud. The leather shows oil staining and compression marks. The stitching is cut at one spot but otherwise intact. The scabbard is in about Good condition. The barrel has a black parkerized military finish and is marked at the top of the chamber with “J”, a logo and “8336H”. The bottom of the barrel at the chamber is marked “J.A. / 30-“06” and the stud on the bottom of the chamber ring is marked “J6258”. The front of the ring on the barrel is marked “.30-‘06” and “41”. The front sight is a Patridge style blade fixed to a base with military style ears which is pinned to the barrel. There is also a bayonet lug pinned to the barrel behind the front sight. There are spots of thinning on the front sight base, the bayonet lug and on the length of the barrel. The barrel also shows a few light compression marks and spots of corrosion. From the ring on the barrel forward, the barrel retains about 70% of its finish. The bore is dark, the rifling is shallow and there is a light ring of erosion near the muzzle. Our bore gauge measures a ME of 4.0. Overall, the barrel is in about Good condition.

Our Assessment: From http://www.johnsonautomatics.com/History.htm: “During his tenure as the Marine Corps observer to Springfield Armory, Melvin Johnson Jr. concluded that the Garand and Pederson rifles on test there both had flaws in design and would be difficult to mass produce. Johnson set about designing a rifle that would be reliable, accurate and easier to manufacture. The result was the Model 1941. By the time all the bugs were worked out, the Army had pretty much decided on the Garand, which was already in production, even though one Marine Corp Capt. reported that “The Johnson Semi-Automatic Rifle, Rotary Magazine Type, is materially superior to the U.S. Rifle, cal. 30, M1 in accuracy and potential combat efficiency”. Johnson secured a contract for 70,000 from the Dutch government, but they couldn’t take delivery, and many were issued to the Marine Corps parachute regiments in 30-06 Springfield caliber. Another 1000 were ordered by the Chilean government in 1943 chambered in 7mm Mauser. Only about 30,000 completed rifles were ever produced.”. This is a very unique rifle in that the markings on both the receiver and the disk on the barrel indicate the caliber is 30.06 Springfield. However, the rifle is chambered for 7mm Mauser, the caliber used by the Chileans. However, there are no marks on the rifle, with the exception of the import marks on the barrel, to indicate that it was used by the Chileans. This Johnson Rifle is in Fine condition as re-finished with only a few marks in its finish, but with some sanding marks and compression marks under the finish. The rifle comes with a .30-06 Springfield barrel, and a bayonet in a leather scabbard. Although the rifle has been refinished and has import marks, we still think that this is going to be one of those “have to have” rifles the collectors of WWII military rifles will want to add to their collection. The .30-06 barrel adds to its authenticity and if you want to shoot it for accuracy, you can always leave the 7mm Spanish barrel attached.