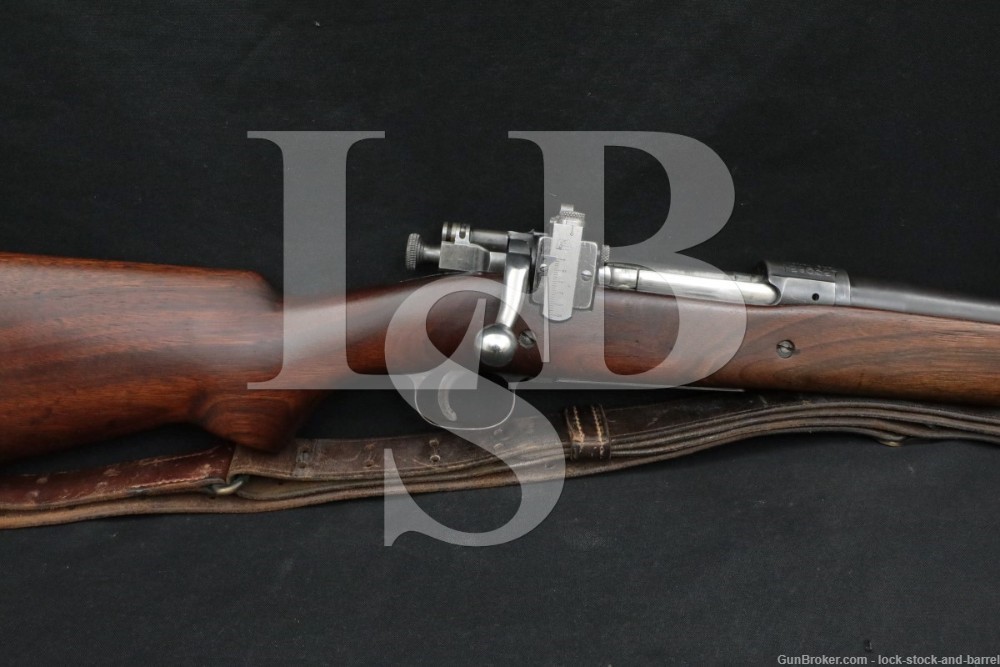 Markings: The muzzle of the barrel features the marking “S A” over a flaming bomb and “3-27” underneath. The receiver is marked “U.S. / SPRINGFIELD / ARMORY / MODEL 1903 / 1295327”. The Bolt lever is marked “N.S.” The barrel band is marked “U”.  The muzzle features an asterisk shaped star which was applied to National Match and the NRA Sporter M1903s. The pistol grip is stamped “R”.

Sights/ Optics: The front sight is a blade pinned to a ramp which has been dovetailed to the front band at the muzzle end of the barrel. The rear sight is a Lyman 48C receiver sight, which features an aperture adjustable for windage and elevation.

Stock Configuration & Condition/ Grip: The stock is one-piece wood featuring a barrel band on the forend, semi-pistol grip, straight comb and black metal buttplate. The bottom of the barrel band and belly have sling swivels. The stock has some scratches, nicks and handling marks. Notably, the left side of the butt has what appears to be hand carved markings (see photos). There are no cracks or chips. The LOP is  13 5/8” from the trigger to the rear end of the buttplate. The buttplate has some finish loss and light handling marks. Overall, the stock is in Very Good condition.

Overall Condition: The rifle retains about 75% of its metal finish. There are some scuffs, nicks, scratches and handling marks. Notably, there are a few scattered small patches of surface oxidation and finish loss around the leading edges. The markings remain clear. The screwheads are serviceable. Overall, the rifle is in Very Good Plus overall condition.

Mechanics: The action functions correctly. There is a gas escape hole on the right side of the receiver. We have not fired this rifle. As with all previously owned firearms, a thorough cleaning may be necessary to meet your maintenance standards.

Box Paperwork and Accessories: There is an attached brown leather sling with brass hardware. Its markings are faded but it is clearly marked “H.J.B.” (see photos). The sling has handling wear and the brass parts have developed verdigris. Overall, the sling is in Very Good condition.

Our Assessment: This Springfield model 1903 NRA Sporter is a bolt-action .30-06 Springfield. The rifle was manufactured in 1928 based on the serial number. The muzzle crown has the asterisk shaped star applied to the crown of the muzzle and gas escape hole on the right side of the receiver typical of National Match (NM) and NRA Sporter rifles. The difference between this rifle and the NM is the lack of a forend grip and rear sight leaf, these were both featured on the NM rifles. The NRA Sporter variant of the M1903 was sold on the civilian market from 1923-1938. Its sale was canceled due to criticism of the Ordnance Department for competing in the sporting rifle market (please see: William S. Brophy, The Springfield 1903 Rifles: The Illustrated, Documented Story of the Design, Development, and Production of all the Models of Appendages, and Accessories. (Mechanicsburg: Stackpole Books, 1985) 193-215). One feature the rifle lacks is the serialization of the bolt, the NRA and National Match rifles typically had their serial number marked with an electric pencil on the bolt but this rifle’s bolt is not marked with a serial number. The rifle remains aesthetically pleasing and mechanically sound. It can still be employed for competitive shooting or used for recreational plinking at the range. Good luck on your bid!