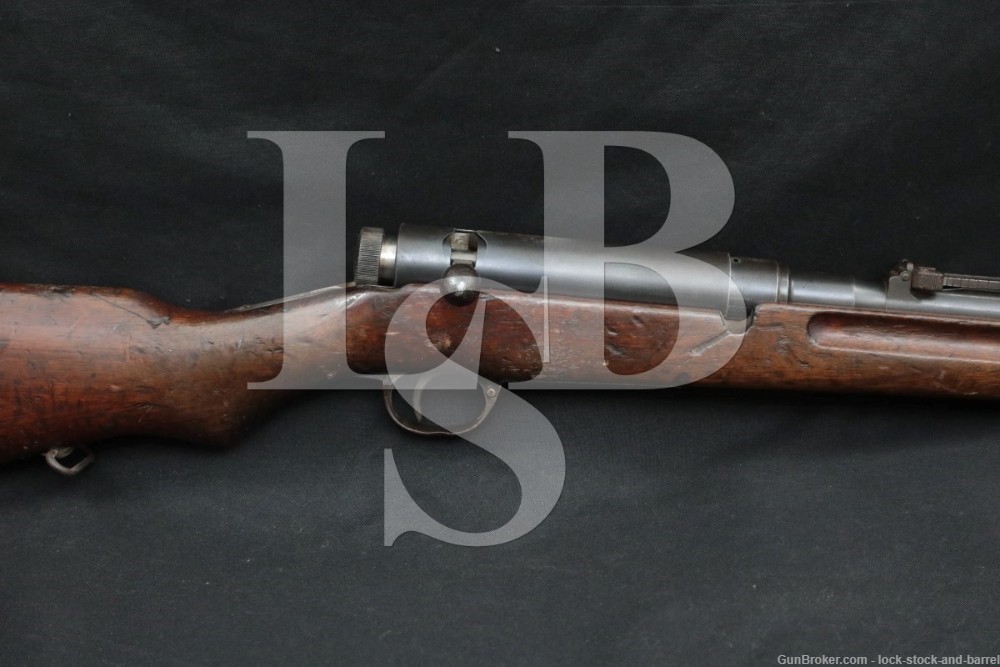 Stock Configuration & Condition: The stock is smooth wood with finger grooves, metal nosecap with a hole for the cleaning rod, semi-pistol grip, straight comb, metal buttplate, and two sling loops. The buttstock is made from two pieces of wood, with the bottom piece starting near the bottom of the pistol grip. The lower tang wraps around the front of the bottom piece to better secure the piece. There are several evenly dispersed compressions, scratches, impacts, gashes, and draglines. The right rear of the buttstock has some material loss. Many of these imperfections have removed small portions of wood. There is some material loss at the toe as well. The LOP measures 13 1/8” from the front of the trigger to the back of the buttplate. The buttplate shows a deep patina with pitting and erosion. The stocks are in about Fair-Good condition.

Bore Condition: The bore is mostly bright with deep rifling. There is some light erosion at the muzzle.

Overall Condition: This rifle retains about 60% of its metal finish. The barrel shows a deep patina throughout. There is thinning at the leading edges. There is some light finish loss on the top of the receiver. The bottom metal shows a dark patina, some areas have gone bright. The bolt has gone bright and the bolt knob and handle shows a dark patina. The screwheads show use with serviceable slots. The markings are mainly clear. Overall, this rifle rates in about Good-Plus condition.

Our Assessment:  As stated by Lock, Stock, and History, “In the early 20th century Mexico was undergoing an era of reform, modernization, and expansion under the presidency (dictatorship) of Porfirio Diaz. One reform was the expansion and modernization of the army, which involved increased purchasing and production of arms. At the time the standard service rifle of the Mexican Army was the bolt action Mauser chambered for 7x57mm.  Despite indigenous production and foreign imports, more was needed.  In 1910 Diaz turned to one of the most unexpected places for weapons. In the early 20th century Japan was on very good diplomatic terms with Mexico.  Mexico was the first Latin American nation to sign a treaty with Japan, and Mexico had a number of military advisers stationed with the Japanese Imperial Army.  Using his influence within the Japanese government, Diaz was able to secure a contract for Japanese rifles. The rifles that were produced was the Japanese Type 38 Arisaka bolt action rifle, which was adopted as the standard service rifle of the Japanese Imperial Army in 1905 and continued to be used until the end of World War II.  While the original version was chambered for the standard Japanese service caliber (6.5x50mm), the Mexican contract Type 38 was chambered for 7x57mm, then the standard caliber of the Mexican Army. Produced at the Koishikawa Arsenal, the Mexican Type 38’s featured the Mexican crest with “Republica Mexicana” stamped on the receiver.  Though they were manufactured in 1910, they were stamped 1913 in order to avoid confusion with the Mexican Mauser Models.” This example retains about 60% of its original finish and is in about Good-Plus condition with a bright bore and strong mechanics. Please see our photos and good luck!