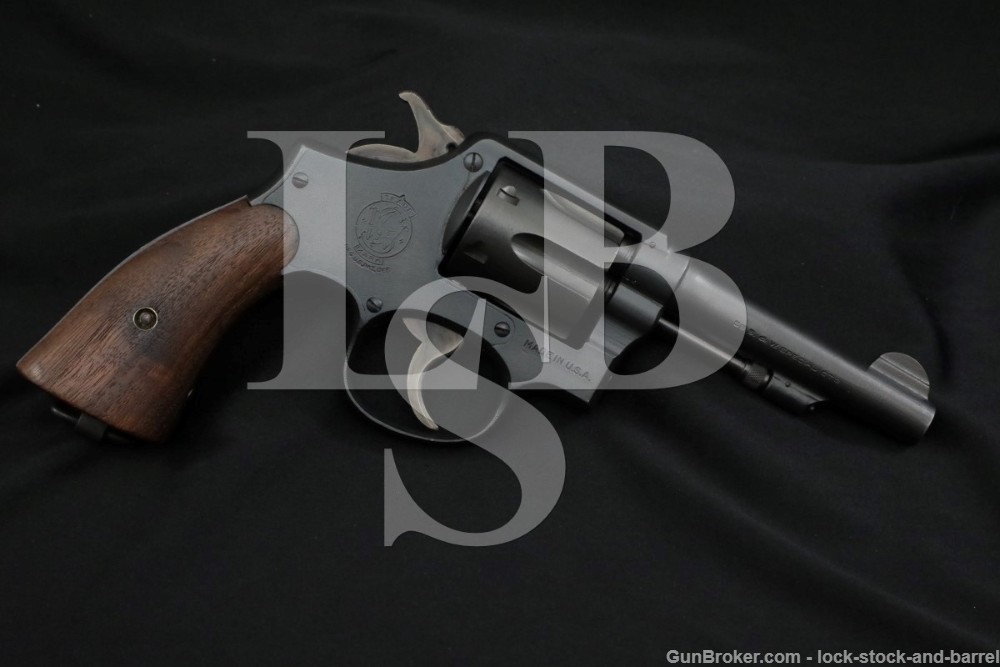 Markings: The left side of the barrel is marked “SMITH & WESSON”, the top is marked “SMITH & WESSON SPRINGFIELD MASS. U.S.A. / PATENTED FEB.6.06. SEPT.14.09. DEC.29.14”, the right is marked “38 S. & W. SPECIAL CTG”. The butt of the grip frame, barrel flat, rear of the cylinder, front of the ejector star (no letter prefix), and rear flat of the yoke (no letter prefix) are marked with matching serial number “V113696”. The butt of the grip frame is also marked with a small flaming bomb. The side plate has S&W’s monogram logo, the right side of the frame is marked “MADE IN U.S.A.”. The topstrap is marked “U.S.M.C. PROPERTY”. There are inspection marks on the crane, its cut, and the sides of the grip frame. The inside of the right grip panel is stamped with a number that does not match the serial number.

Finish Originality: We suspect that this has been professionally restored, please see “Our Assessment”.

Overall Condition: This handgun retains about 97% of its metal finish. There are a couple of light scuffs on the trigger guard that have lightly thinned the finish. There are a couple of spots of minor surface oxidation at the cylinder stop bolster. There are a few faint spots of mottled discoloration and a few little spots of faint surface frost on the cylinder. The screwheads are sharp, the grip screw has light wear. The markings are mostly clear and strong, the topstrap marking is slanted and a little light. Overall, this revolver is in about Excellent condition.

Our Assessment: At the beginning of WWII S&W began producing their M&P revolver for military use. They added a “V” for Victory to the serial number; this iteration thus became known as the Victory Model. As we entered the fray, we were producing them for US forces as well as for our allies. Victory model revolvers were standard issue for Naval and Marine aviators as well as guards back in the States at defense installations and factories supporting the war effort. This one has a lot of finish remaining, we suspect that it has been professionally restored. The finish looks very good and the markings have raised edges but the Victory Models were typically marked  U.S. NAVY, UNITED STATES PROPERTY or U.S. PROPERTY G.H.D., we have not seen record of any U.S.M.C. marked revolvers. This one has a U.S.M.C. marking but it is off-center and under the finish, there were some companies that would add markings such as U.S.M.C. or O.S.S. to Victory models and then sell them after doing a restoration. This one will be a nice addition to a WWII collection and this is still a K-frame .38, perhaps the benchmark for a .38 duty or defense revolver and will certainly serve faithfully for lifetimes to come. Please see our photos and good luck!