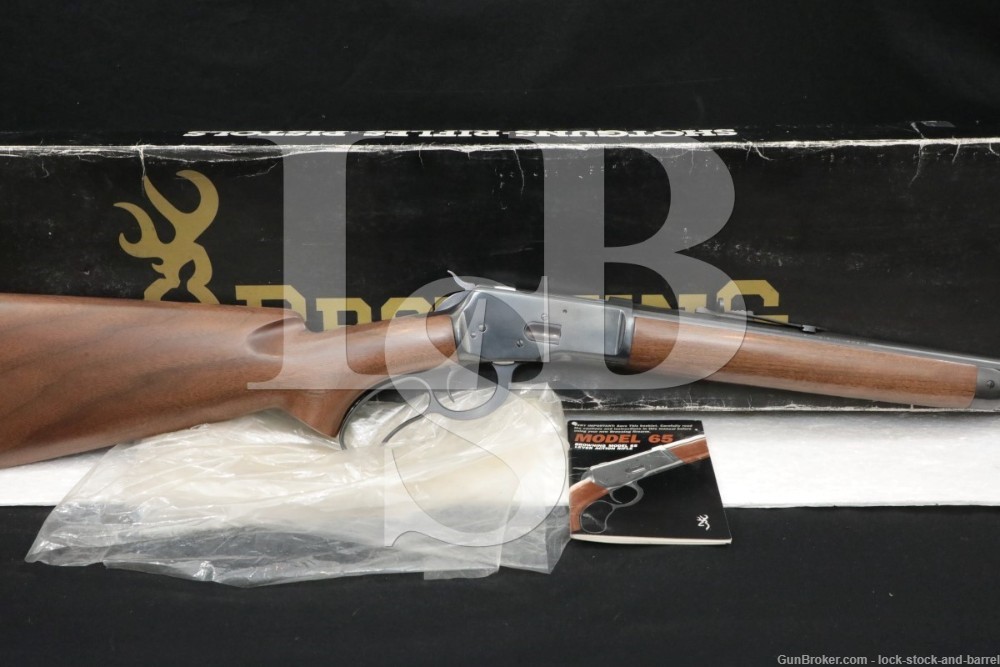 Make: This rifle was made by Miroku of Japan for Browning

Barrel Length: The round barrel is about 24” in length.

Stock Configuration & Condition: The stocks are smooth fancy walnut with a semi-gloss finish. The buttstock has a pistol grip with a matte gray checkered flat steel buttplate. The forend has a blue nosecap with the front ¼” off the magazine tube sticking out. There are no major imperfections worth noting. The LOP measures 13” from the front of the trigger to the back of the buttplate. The buttplate shows a few light marks and a small amount of oxidation in the checkering. The stocks rate in about Excellent condition.

Overall Condition: This rifle retains about 99% of its original metal finish. There are a few light marks on the sides of the receiver. There is faint operational wear. The screw heads are sharp and the markings are crisp. Overall, this rifle rates in about Excellent condition.

Mechanics: The action functions correctly. The hammer has a half-cock safety and the trigger pull is crisp. We have not fired this rifle. As with all used firearms, a thorough cleaning may be necessary to meet your maintenance standards.

Box, Paperwork & Accessories: This rifle comes in its original serial matching box with a manual. The box shows moderate storage wear with light tears at the corners.

Our Assessment: The Winchester Model 65 had a relatively short run in the time-span of Winchester lever-action rifles. Manufactured from 1933 to 1947, the Model 65 could be described as a successor to the Model 53, which itself was an improvement on the design of the famous Model 1892. The Model 65 was the rarest of the 1892 family. Only about 5,700 were manufactured, compared to 25,000 for the Model 53 and approximately a million for the 1892. The Model 1892 and its successors were all chambered in popular small-game cartridges. In 1938, Winchester introduced the .218 Bee, based on a necked-down .25-20 WCF. The .22 Bee was the first competition for the .22 Hornet in the category of varmint cartridges. The .22 Hornet was chambered in bolt action and single shot rifles, and so for the first time, those with a fondness for lever guns and small game/varmint hunting had a lever gun chambered in a varmint cartridge. The Bee and the Hornet were the only two flat shooting varmint cartridges available until the .222 Remington made its debut in 1950. Both were quite popular, although the Bee shot from a Model 65 wasn’t quite as accurate as the Hornet shot from a bolt gun, this probably limited the enthusiasm for the Bee. In 1989, Browning marketed a faithful reproduction of the Model 65, chambered only in .218 Bee. 3500 were made in Grade 1 and 1500 in High Grade. This limited edition Grade 1 rifle is in about Excellent condition with 99% of its original finish remaining. The bore is bright with sharp rifling. With only 3500 made, this rifle makes an excellent choice for the Browning collector to expand his/her collection with a lever gun. It is also a good choice for the shooter wanting a lever action varmint rifle, but not able to afford the high price an original Model 65 with a pristine bore would fetch.