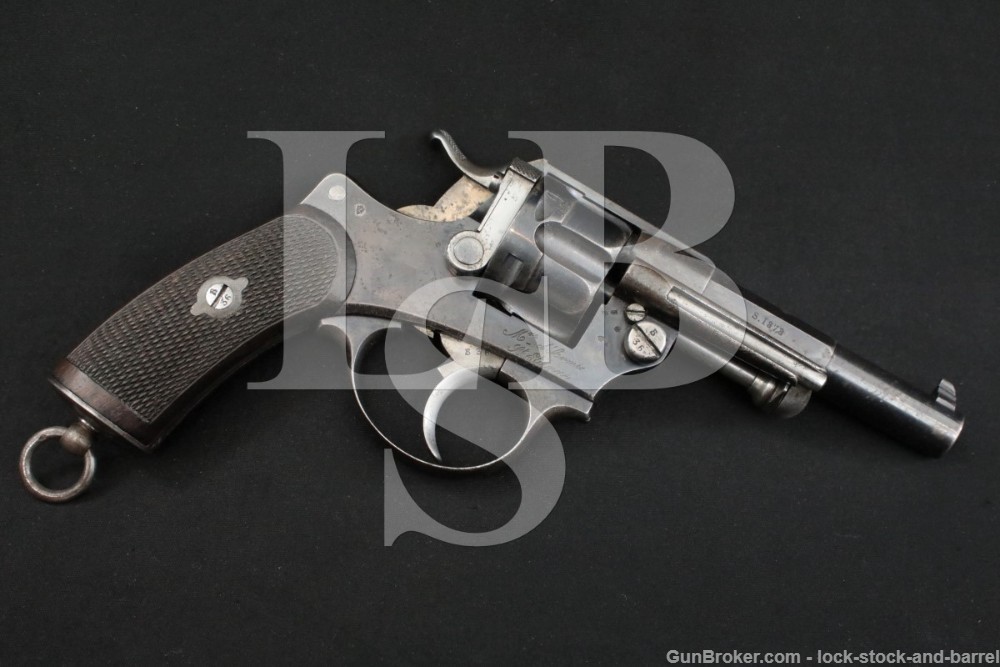 Sights/Optics: The front sight is a beaded blade pinned to a slotted base integral to the front of the barrel. The rear sight is a U-notch at the rear of the top strap.

Stock Configuration and Condition: The grips are two-piece checkered walnut with the left panel secured by the side plate and a tab integral to the butt, the right screw-secured. Both panels are rather dark in appearance. The smooth areas have intermittent minor nicks. The checkering has minor handling wear but is generally well defined. There are no chips or cracks. Overall, the grips rate in Very Good condition.

Bore Condition: The bore is quite bright with well defined rifling. There is scattered minor erosion erosion and intermittent minor pitting in the bore.

Overall Condition: This revolver retains about 65% of its metal finish. All metal surfaces have light surface oxidation scattered about. Most edges of the barrel have light thinning and there are scattered light nicks and scuffs. The frame has light thinning as well and scattered light nicks and scuffs most notable. The action has light operational wear. The screw heads range from sharp to tool marked with strong slots. The markings are clear. Overall, this revolver is in Good-to-Very Good condition.

Mechanics: The action functions correctly. The cylinder lockup has light play when the trigger is depressed. The double action trigger pull is relatively smooth and the single action trigger is crisp. We did not fire this revolver. As with all used firearms, thorough cleaning may be necessary to meet your maintenance standards.

Our Assessment: The Chamelot-Delvigne 11mm Modele 1873 was adopted by the French army as a service revolver for non-commissioned officers. The Modele 1874 Revolver d’Officier was the version issued to officers. The differences between the two models included the following: the 1873 was finished in the white, whereas the 1874 had a fluted cylinder and a blued finish. The 1873 and 1874 were the first center-fire cartridge revolvers adopted by the French army. They had solid-frame, side-ejection, double-action mechanisms. The pistols were manufactured by the St. Etienne arsenal, which still continues to manufacture fine sporting arms. This example retains about 65% original finish and has smooth, fluid mechanics. Good luck and happy bidding!