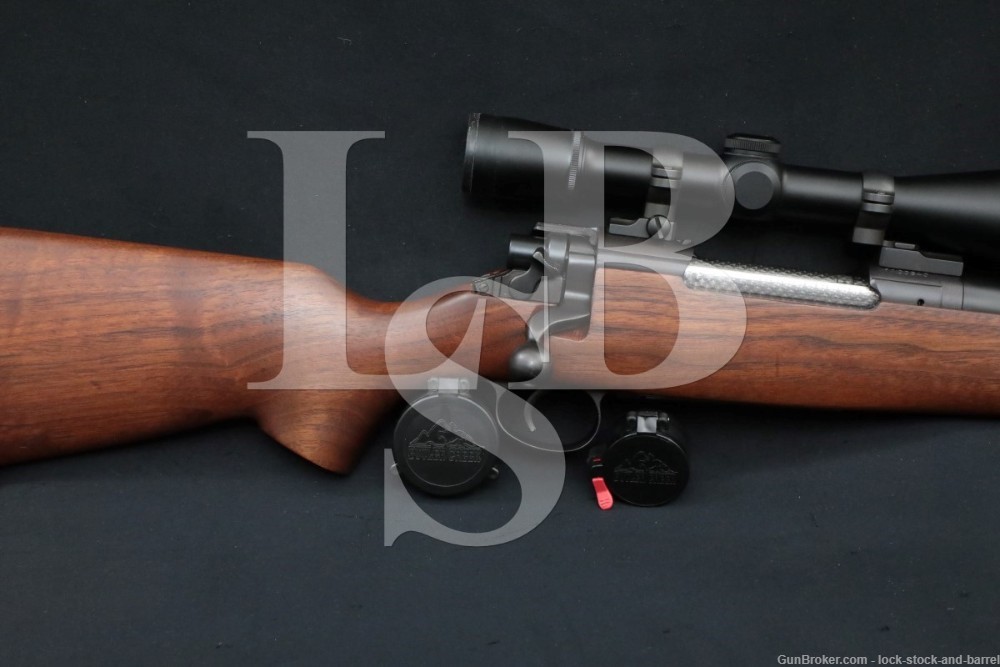 Make: Eddystone, a subsidiary of Remington

Sights/ Optics: There is no provision for iron sights. There is a Weaver 4×38 scope which is held by two scope rings screwed onto mounts that are screwed to the receiver. The scope has a duplex reticle, the reticle is sharp and the glass is clear. The scope has Butler Creek lens caps. Overall, the scope is in Fine condition. The receiver bridge has only two holes drilled and tapped for the rear base. The chamber ring has four drilled and tapped holes, with only two being used by the front base.

Stock Configuration & Condition/ Grip: The stock is one-piece smooth walnut with pistol grip, monte carlo style comb, black rubber buttpad and sling studs front and rear. The stock has some light handling marks but lacks any notable defects. There are no chips or cracks. The LOP is 13.5” from the trigger to the rear end of the buttpad. The buttpad has only light handling wear. Overall, the stock is in Fine Plus condition as not original to the gun.

Overall Condition: The rifle retains about 98% of its current metal finish. There are some handling marks and light wear at the muzzle. There is infrequent minor erosion under the finish. The action shows minor operational wear. The markings remain clear. The screwheads are serviceable. Overall, the rifle is in Fine-Plus condition.

Our Assessment: This Eddystone model 1907 “American Enfield” is a bolt-action rifle that has been re-barreled for use with .35 Whelen rounds. Developed by James Howe, of Griffin & Howe, and named after the famed hunter, rifleman, and commanding officer of the Franford Arsenal, Townsend Whelen, the .35 Whelen is based on the .30-06 cartridge, but necked up to .358″, allowing for the use of heavier bullets, suitable for large game. The receiver of this rifle is from the classic U.S. military rifle which was used from WWI through the Vietnam War, but it has been customized for use as a sporting rifle. Unfortunately the rifle can not be considered a Curio and Relic (C&R) because of this, but it will still make for a great hunting rifle for the lucky winner. The rifle is nicely finished and mechanically sound. This rifle’s receiver may be more than a century old, but it has more than a century’s worth of use left in it. Good luck on your bid!