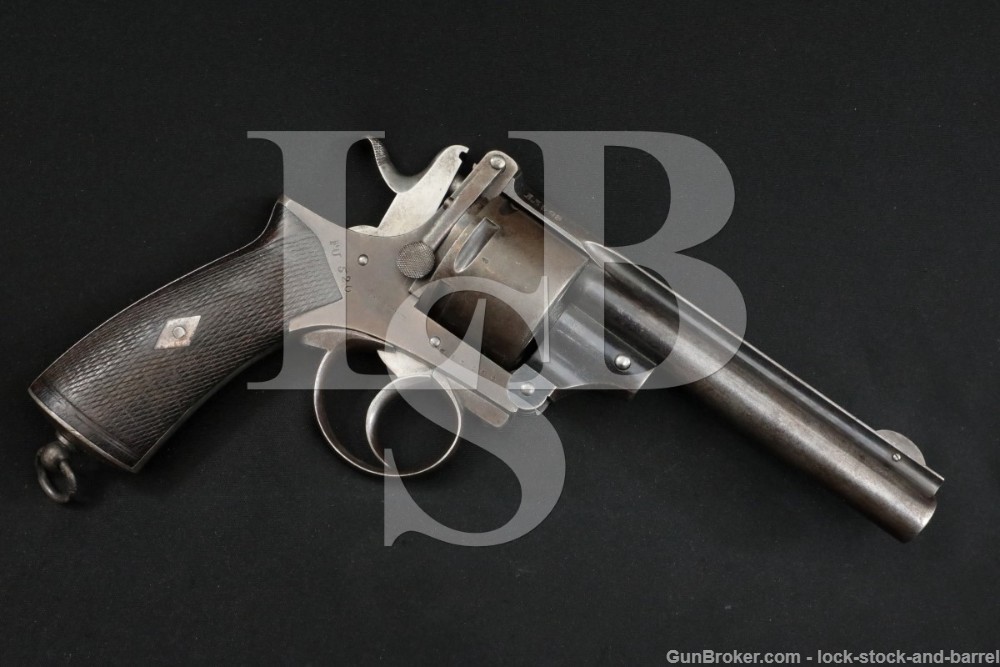 Barrel Length: The 5” long barrel is round with a full-length barrel rib.

Sights/Optics: The front sight is a thin rounded blade pinned into a slot in the top of the barrel’s rib. The rear sight is a “V” groove at the top rear of the top strap.

Stock Configuration and Condition: The grips are two-piece checkered walnut. The panels are rather dark in appearance and the left panel has several longer nicks and compressions. Smooth areas have light compressions throughout. There are no chips or cracks. Overall, the grips rate in Good-to-Very Good condition, as antique.

Type of Finish: The finish is blued, while the trigger, hammer, cylinder retaining knob and thumb release levers are “In the White”.

Bore Condition: The bore is mottled bright and gray with sharp pronounced rifling. There is moderate erosion in the bore at the muzzle.

Overall Condition: This handgun retains about 10% of its metal finish. Large areas of the metal have gone to a light patina, most especially the cylinder. The barrel rib has intermittent light nicks along the edges. The barrel itself has a few light nicks. The frame has light thinning on most edges. Light surface oxidation can be seen throughout. Screws are lightly tool marked with strong slots. The markings are clear. Overall, this handgun rates in about Good condition, as antique.

Mechanics: The action functions correctly. The double action trigger is smooth and the single action is light. The cylinder lock-up is very good considering the single sided bolt stop cuts, but there is light play. We did not fire this handgun. As with all used firearms, thorough cleaning may be necessary to meet your maintenance requirements.

Our Assessment: In 1879, P. Webley & Son manufactured a new range of revolvers that incorporated some of the new design features originated by Charles Pryse the previous year. One of the new features was a locking mechanism for the cylinder that prevented it from turning when the trigger was released after firing. Connection of the barrel to the frame was done with twin levers which formed tongs to engage an extension of the top strap. The pistol was popular, and it wasn’t long before others started copying the design. This Pryse Pattern revolver was made by D. Wales, of Regent St. Yarmouth, England. The revolver has a 5” barrel, which we believe is chambered for .455 Webley, and retains just 10% of its original blued finish. The revolver rates in Good condition with a very nice bore. Collectors of early British revolvers are going to be very interested in this revolver. Good luck and happy bidding!