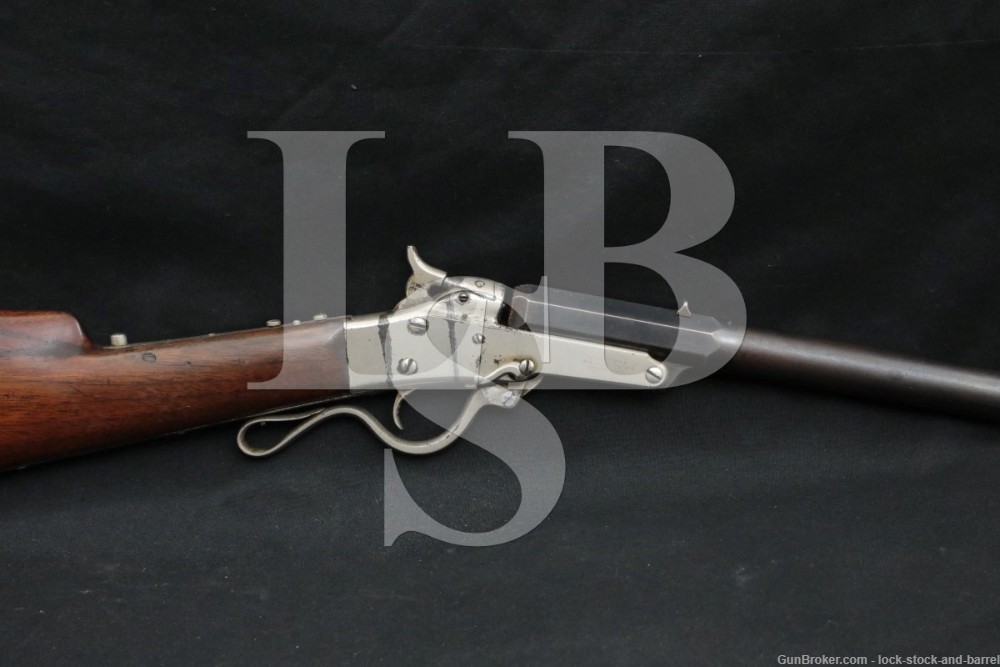 Year of Manufacture: Circa 1873, ATF Antique

Sights/ Optics: The front sight is a blade that has been dovetailed to the muzzle end of the barrel. The rear sight is a “V”-notch which has been dovetailed to the rear end of the barrel.
Stock Configuration & Condition/ Grip: The stock is one-piece wood and features a straight wrist, straight comb and metal buttplate. The stock has been refinished. There are some scratches, nicks, compressions and handling marks. Notably, the right side of the butt has some oil stains. There are no chips or cracks. The LOP is 13.75” from the trigger to the rear end of the buttplate. The buttplate has had its finish removed, features some small patches of oxidation and handling marks. Overall, the stock is in Very Good condition for an Antique.

Bore Condition: The bore is mostly bright and the rifling is sharp. There is some erosion in the bore.

Overall Condition: The rifle retains about 15% of its metal finish. The barrel has some of its blue finish remaining, but the rest of the rifle’s metal finish has been removed. The barrel is coated in surface oxidation and has taken a patina color. There are some scratches, nicks and handling marks. The markings remain clear. The screwheads have toolmarks and oxidation in their slots. Overall, the rifle is in Good condition for an Antique.

Mechanics:  The action functions correctly. We have not fired this rifle. As with all previously owned firearms, a thorough cleaning may be necessary to meet your maintenance standards.

Our Assessment: This Massachusetts Arms Co. Maynard Carbine is a .40 caliber single-shot center-fire lever operated top-break rifle. The carbine is named after Edward Maynard, the man who invented the firearm. Maynard was a prominent dentist throughout the 19th century and designed this carbine in the late 1850s. He formed a relationship with the Massachusetts Arms Company to produce his carbine for both the military and civilian markets. His invention would soon be put to the test as the United States descended into Civil War in 1861, with both the Union and Confederate governments employing it in battle. The carbine was popular among the troops who used it and remained one of the few breechloaders to remain in production after the war. It would continue to be sold as a target and hunting rifle until 1890 with later models introducing rimfire and centerfire cartridges as they were developed. This particular Maynard is a Model 1873 which accepts a proprietary .40 caliber cartridge which has a rather wide base, accounting for the gap between the barrel and receiver The rifle is still mechanically sound. This is an antique you do not want to miss out on!