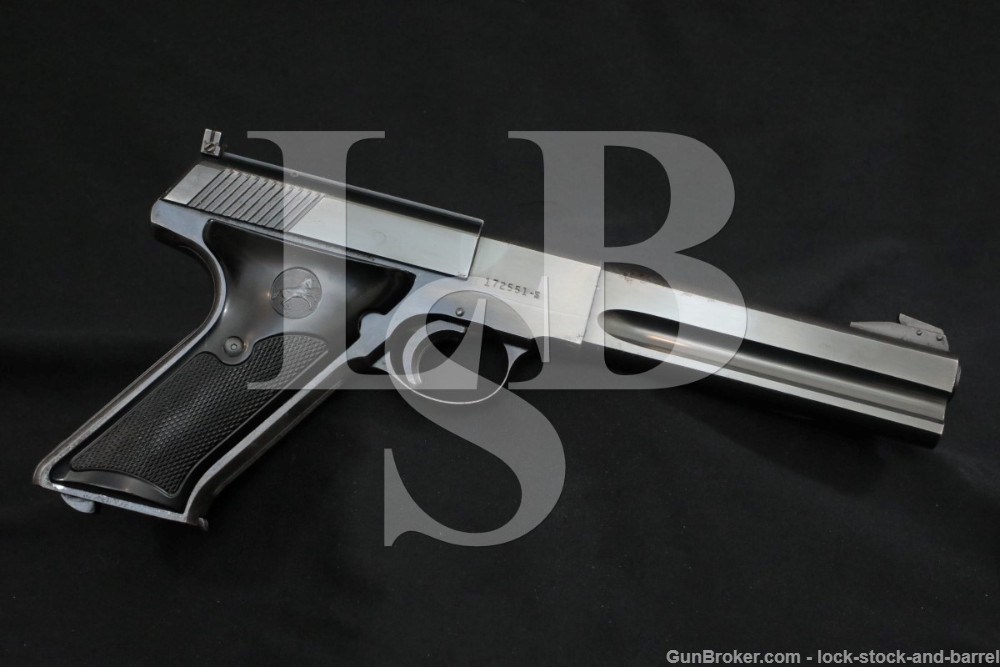 Sights / Optics: The front sight is an undercut blade pinned to a serrated, ramped base fixed to the front of the barrel. The rear sight is a square notch leaf in a base that is adjustable for windage and elevation and pinned to the rear of the slide.

Stock Configuration & Condition: The grips are two-piece checkered black plastic with thumb rest on the left panel as for a right-handed shooter. The right panel has a molded rampant colt. The grips have handling wear and a few light draglines. There is a light mark on the right panel behind the escutcheon. The left panel has some faint movement. The checkering is well defined. There are no cracks. Overall, the grips are in about Fine condition.

Overall Condition: This pistol retains about 88% of its metal finish. The finish is thinning at most edges. There are a few little nicks scattered over the barrel. there are some spots of finish loss and spots of light erosion, some of the most noticeable are on the right side of the barrel along the top edge, the right side of the frame, and on the trigger guard. The grip frame has thinning, mottled discoloration, some spots of frost, and a couple scabs. The top of the barrel has some spots of discoloration and a couple light scabs, most noticeable towards the rear. A trigger shoe has been installed. The bottom corner of the slide stop cut is worn from contact with the stop. The action shows operational wear. The screw head is sharp. The markings are clear. Overall, this pistol is in about Very Good condition.

Mechanics: The action functions correctly. The slide locks back on an empty magazine but sometimes only the very bottom corner is engaged. The manual safety can be used to lock the slide forward. We did not fire this pistol. As with all used firearms, a thorough cleaning may be necessary to meet your maintenance standards.

Box, Paperwork & Accessories: Included is a single 10-round magazine.

Our Assessment: This is a Colt Woodsman 3rd Series Match Target Model pistol, made in 1957. It has a fluted slab-side barrel, adjustable sights and a claw magazine release characteristic of the 1st and 3rd Series (The Colt Woodsman pistols changed the location of the magazine release from the butt to the left side of the frame and then back to the butt for the 1st, 2nd and 3rd Series, respectively). John M. Browning designed “Colt’s Automatic Pistol, Caliber .22”, later to become the Woodsman, with the design refined slightly by Colt employees George Tansley and F.C. Chadwick before it was released in 1915 and the Woodsman stayed in production until 1977. Sportsmen favored the 4 ½” Sport Model, but the Match Target was the top of the line and a favorite of bullseye target competitors. The pistol is in Very Good overall condition with about 88% of its original finish remaining. The bore is bright with sharp rifling and no erosion. Target pistols of this quality are no longer made in the United States and will command a premium over most “new” currently manufactured pistols except those used for high-end competition. If you are looking for a rimfire target pistol, this is still a better choice than most “NEW” pistols on the market today, but as with most Colts, they are now quite collectible. This 3rd Series with nice grips, a 6″ barrel, and original finish is sure to attract the Colt collectors. That said, it has some wear and a minty bore, so it is ready to hit the range and punch some paper or ring some steel. Please see our photos and good luck!