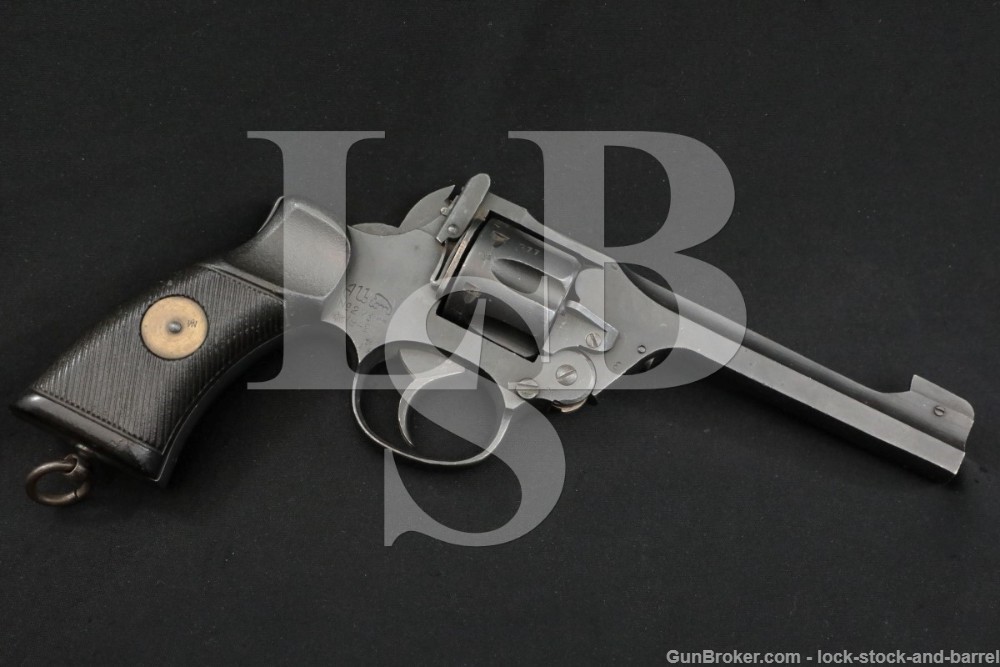 Stock Configuration & Condition: The grips are serrated black synthetic panels with smooth thumb-rests at the top of each grip. There is bubbling on the smooth borders of the grips, likely from prolonged heat exposure at some point.  The grips have scattered nicks, scuffs, and scratches on the smooth portins. There are several minor interruptions in the serrations on both panels and they are generally well defined. There are no chips or cracks. Overall, the grips are in about Good-Plus condition.

Bore Condition: The bore is mostly bright with well defined rifling. There is some light erosion in the bore.

Overall Condition: This handgun retains about 93% of its metal finish. There are scattered little nicks and scratches with some thinning on the leading edges. The markings range from sharp to faded yet legible. The screw heads range from sharp to tool marked with strong slots. Overall, this pistol is in about Fine condition.

Mechanics: The action functions correctly. The barrel lockup is solid and the cylinder lockup has very little play on each chamber when the trigger is depressed. The ejector works correctly yet sticks in the extended position from time to time. The double action trigger pull is smooth. We did not fire this handgun. As with all used firearms, a thorough cleaning may be necessary to meet your maintenance standards.

Our Assessment: The Enfield No. 2 revolver was in service with the British Empire from the 1930s through the 1960s. Following the Great War, it was decided that a smaller, lighter sidearm should be produced and issued. The result was the No. 2, chambered for the .38/200 cartridge (essentially a .38 S&W), a single and double action revolver produced by RSAF Enfield. As the war progressed, there were changes to the design, designated * changes. The vast majority of Enfield No 2 revolvers were made by RSAF (Royal Small Arms Factory) Enfield, but wartime necessities meant that numbers were produced elsewhere. Albion Motors in Scotland made the Enfield No 2 Mk I* from 1941 to 1943, whereupon the contract for production was passed onto Coventry Gauge & Tool Co. By 1945, 24,000 Enfield No 2 Mk I* and Mk I** revolvers had been produced by Albion/CG&T. It has matching serial-numbered parts and the remaining markings are proper. It still has strong mechanics, and would make a nice addition to a WWII, British sidearm, or Enfield specific collection. Please see our photos and good luck!