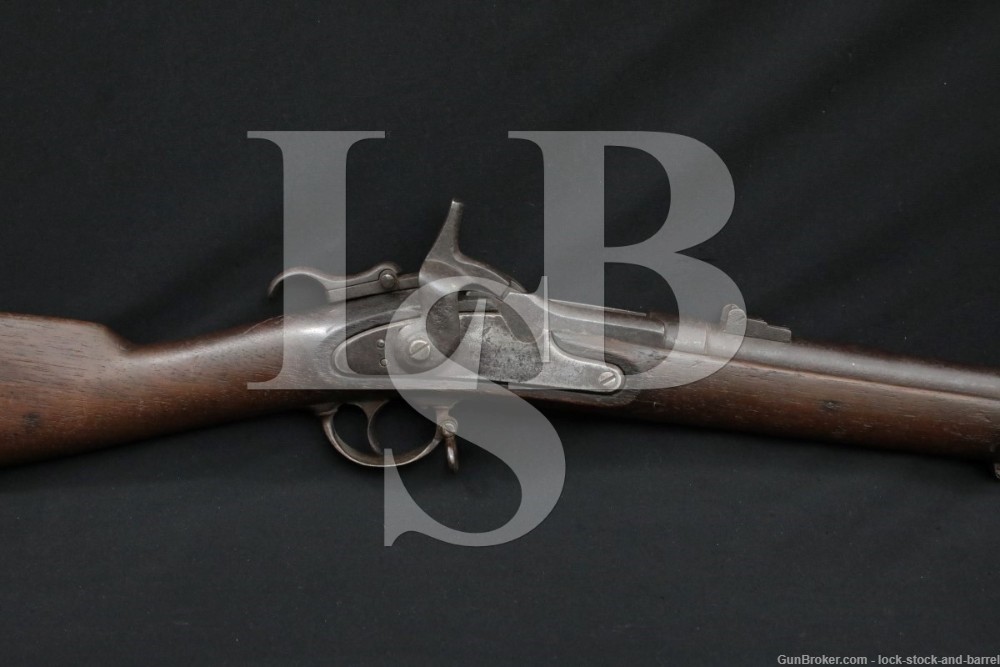 Sights/Optics: The front sight is a blade pinned to a rectangular base set on the barrel. The rear sight is an 1884 Buffington sliding ladder.

Stock Configuration and Condition: The stock is a one-piece smooth walnut with nose cap, ramrod groove (ramrod is included) three barrel bands, straight grip, straight comb, and a steel butt plate. There is a sling swivel on the front of the guard and one on the mid-barrel band. The wood is overall dark in appearance and there are light-to-moderate nicks, scuffs, dings, and compression throughout. There are a few notable losses on the left side below the breach. The wood at the buttplate is heavily weathered and there is a large crack running the length of the buttstock. The LOP measures 13 1/2” from the front of the trigger to the back of the buttplate. The plate has moderate surface oxidation throughout along with moderate scuff wear at  the heel and toe. Overall, the stock rates in Fair-to-Good condition, as antique.

Bore Condition: The bore is dark. Spots of moderate erosion can be seen dotted throughout, and moderate stubborn fouling persists throughout.

Overall Condition: This rifle retains about 0% of its metal finish. All metal has gone to a dark patina, and clusters of light-to-moderate nicks, dings, and scrapes can be seen throughout. All metal has light surface oxidation throughout. The screw heads are lightly tool marked with usable slots. Markings are clear. Overall, this rifle rates in Good condition, as antique.

Our Assessment: Prior to standardizing the more well-known Trapdoor rifle, the federal government set out to convert existing stores of percussion muskets to cartridge firing rifles. One such conversion is the Roberts patent falling block rifle on offer here. The invention of Brigadier General B.S. Roberts, the original 1861/63 musket breech was replaced with the mechanism seen here—a multi-piece tip-up lever that allowed the wielder to slip one round into the chamber. Finally cocking the hammer locked the breech. Initially endorsed by the New York trial board in 1867, an actual purchase in that state fell through, and Roberts was left to hastily find another buyer. 5,000 would ultimately be purchased for South Carolina’s 13 Coast Guard regiments. Collectors should take notice of this rifle for two reasons: 1.) These rifles were, in effect, experimental, regardless of the number produced, and most simply did not survive consistent use. To have one even in the condition seen here is a boon. 2.) Their experimental nature makes them exceedingly cool. In the case of this rifle, the original 1861/63 musket side plate remains, and so serves as a fascinating example of the old and new existing together, even if for a brief period. A rifle like this is history in the hand. Good luck, and happy bidding!