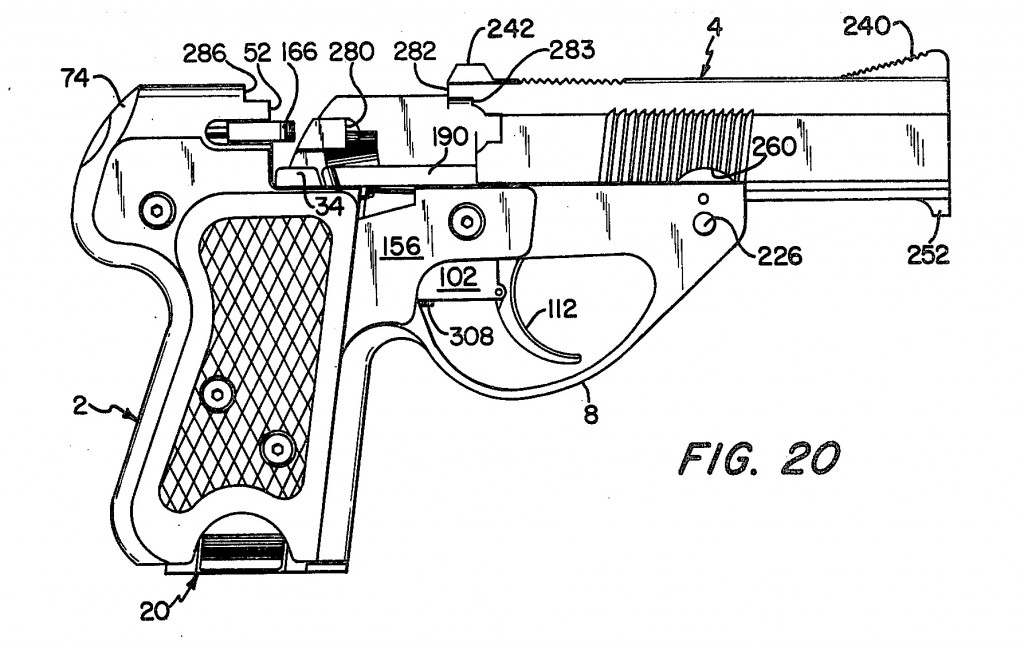 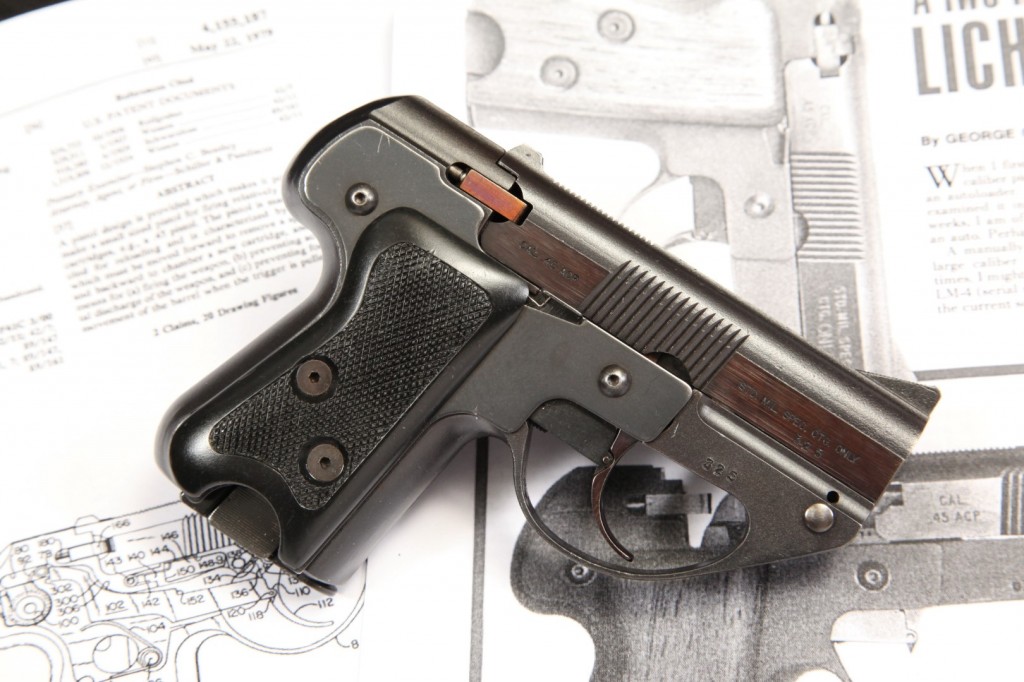 From: http://www.nrapublications.org/index.php/9717/the-semmerling-pistol/ – The Semmerling line of manual repeaters included the world’s smallest and most powerful multi-shot pistols ever offered.

Built in the early 1980s and originally offered only to U.S. Army and government agencies, the Semmerling line of manual repeaters included the world’s smallest and most powerful multi-shot pistols ever offered. Chambered for the military standard .45acp “ball” cartridge, the 1-inch wide Semmerling lm4 was a design variant boasting only 33 parts that was offered as an amazing combination of practical stopping power, reliability and ease of concealment. Fully loaded with five rounds, the compact Semmerling lm4 pistol weighed less than 20 ounces.

Constructed primarily of S-7 tool steel, the Semmerling line of pistols included the xlm, the only semi-automatic version, made for a military contract. But the standard Semmerling locked-breech handguns provided memorable recoil and required manually cycling the barrel forward to eject the fired case, then backward to feed another cartridge into the chamber. Quality control was high on the assembly line, with each Semmerling pistol being Magnafluxed twice to detect any hidden metallurgical flaws. About 600 Semmerling lm4 pistols were manufactured.

In 2005, an extensive collection of Semmerling handguns was donated to the National Firearms Museum, and today visitors to the galleries can see each of these pieces reflected in an exhibit aptly entitled “Mother of Invention,” where the Semmerling shares the spotlight with other innovative designs like the Bren Ten, Dardick, Gyrojet and others.

When I first saw a picture of the Lichtman LM-4.45 w caliber pistol a couple yeap back, I felt certain it was an autoloader. Well, it wasn’t and isn’t, but after having examined it in great detail and played with it for a few weeks, I am of the opinion that it could be developed into an auto. Perhaps we can look forward to that someday. A manually-operated, magazine-fed, repeating pistol of large caliber may seem to be an anachronism in these times. I might have thought so before trying out our sample LM-4 (serial number 014) but not now. There is a place in the current scheme of urban combat for the smallest-pack-very rapid emergency use. It meets those requirements admirably for the first shot; only for subsequent shots is it slower than an auto or double-action revolver.

Actually, with practice, its manual operation isn’t all that slow. Using both hands as intended, and without interference, it’s possible to fire five shots in less than five seconds. Though the gun is not intended for one-hand operation after the first shot, it can be fired that way nearly as rapidly as with two hands. Operation is simple, though unorthodox, and it takes a bit of practice to avoid screwing up the detail. With the breech closed squeeze the catch flaps at the butt of the magazine and withdraw it. Load with four .45 ACP ball cartridges and replace in the butt. Now, take the barrel (it looks like an autoloader slide) at the grasping grooves and jerk it smoothly forward, against its stop, then snap it backward to close the breech. This places the first round in the chamber from the magazine, and it should be replaced.

The gun is fired double-action only. Simply grasp it normally and pull the wide trigger back all the way to fire. The reciprocating striker will be forced back, then allowed to run forward under the influence of its spring to fire the cartridge in the chamber. The breech is locked only at the instant of firing; it is “trigger-locked” in that pulling the trigger rotates a locking shaft in front of an-abutment on the underside of the barrel, locking it to the frame. When the trigger is released to run forward, it unlocks the barrel which may then be snapped forward and back to reload for a subsequent shot. When not locked (its normal state) the barrel is held in battery by a simple detent. When both hands are available, most rapid fire is obtained shooting from the hip, keeping the off hand slightly above and to the rear of the gun; after the shot (and the trigger must be released) the hand sweeps down and forward, snapping the barrel forward, then back to reload, the hand coming to rest where it began.

This is faster than it seems. If the off hand is disabled or otherwise occupied, release the trigger as the gun rises in recoil, then bring it down sharply, snapping the wrist downward as it passes through horizontal. The momentum given the barrel will cause it to over-ride its detent and run forward, extracting and ejecting the fired case. Then, ramming the muzzle-not too hard-against any solid object slams the barrel back into battery, chambering a cartridge, and a second shot may immediately be fired. If no other object is handy, the muzzle may be rammed against the shooter’s own leg-just don’t start pulling the trigger until the leg is cleared by the muzzle.

Unusual operation, to be sure, but it makes possible a five-shot .45 pistol of this small size: length 5.160″; height 3.810″; width 1.180″; weight 21 oz. Barrel length is 3.650″. Width can be reduced nearly ‘A” by replacing the grips with thin, sheet-steel plates offered separately as a “concealment conversion kit”. Actually, the principle of operation is by no means new. It has been applied to low-power autoloaders in the past and is described as “blow-forward”. In an auto, this means the barrel recoils forward, leaving the fired case held against a standing breech to be hurled aside by a moving ejector; then the barrel is driven back by age/biggest-caliber handgun that can be developed, even if speed of sustained fire must be traded away for compactness.

Before condemning out-of-hand the idea, stop and consider for a moment the number of two-shot .38 and larger derringers carried by professional gunmen today. Most of them are of a design more than a century old, though recently manufactured, very difficult to handle,’ and as slow to get off a second shot as the LM-4. And after the derringer’s two shots are gone, the LM-4 can still speak loudly three more times from its cavernous, .45 caliber throat. Admitting that the LM-4 is bigger and heavier than a .38 or .357 derringer, I believe I’d prefer it to the two-shooters. The LM-4 was designed purely as a second gun for law-enforcement officers, not as a primary weapon. As such, it is intended for maximum concealment and its spring, scooping a fresh round from the magazine.

The LM-4 works the same way, but manually. Mechanically, the LM-4 is quite simple. The barrel-cum-slide rides in tracks on the frame and has an integral rearward extension laying alongside the fixed standing breech. A sturdy extractor is fitted to the breech, which houses a short, reciprocating striker powered by a torsion spring. The trigger is pivoted to the frame and connected to its lower limb is a bar laying in the left side of the frame. The rear of this bar contacts a roller on the side of the striker. A lug on the trigger aligns with a notch in the barrel when the barrel is in battery. The magazine rides more or less vertically inside the grip. When the trigger is pulled the barmoves rearward, pushing back the striker to compress its spring At the proper point, the bar cams off the striker which is driven forward to fire the cartridge. Also, as the trigger rotates rearward, it rotates a segment of the locking pin in front of an abutment on the barrel; at the instant of firing, the mechanism is fully locked, but unlocks when the trigger is released. Moving the barrel forward leaves the fired case held against the breech by the extractor. A lug on the barrel extension contacts the head of the top cartridge in the magazine, pushing it forward about one inch; a second lug there strikes the head of the fired case just before the barrel reaches the end of its forward stroke, and hurls the case clear.

As the barrel is moved.back, a ramp beneath the chamber scoops up the next cartridge, and as barrel movement continues, the cartridge is chambered and pushed under the extractor claw. When the barrel halts against the standing breech, the gun is again ready to fire. Unless the barrel is fully in battery the gun cannot be fired; the lug on the trigger prevents pulling the trigger until the notch on the right underside of the barrel is aligned with it. Functioning is just that simple, and parts are ridiculously few.

Disassembly hardly seems necessary for cleaning, but is simple enough. Reach inside the small hole at the right front of the frame and depress the barrel-pin latch; a ‘/id1 punch does the job nicely. Press the pin out to the right and slide the barrel off to the front. Turn out grip screws and remove grips. Turn out the front side-plate screw on the right side of the frame; loosen the rear side-plate screw only slightly. Rotate the front of the side-plate downward carefully, removing each small spring as it comes into view. If this is done carelessly, the spring may fly out and become lost remove the sideplate and stop. No further disassembly is necessary-but the steps are obvious if you insist.

Though not of a type with which sights will often be used, the LM-4 carries a better set than most pocket pistols, complete with serrated rib. The sights are useful, because the DA-only trigger pull has a built-in hesitation just before the striker falls. This allows deliberate aimed fire with a modicum of practice. One might expect this gun to recoil viciously-but it does not. The wide backstrap and low barrel position greatly reduce recoil effect. Even at 21 ounces I’ve not found its recoil or jump noticeably worse than a .45 Colt LW Commander weighing over a third of a pound more. All in all, this is a most unusual gun, designed by Philip Lichtman and produced by the Semmerling Corp. of Boston (P.O. Box 400, Newton, Mass. 02160). But, friends, it ain’t cheap. In current limited production an LM-4 will set you back $645.00 worth of American long green. But, if it can save your life, who can say that’s too much? You pay more for life insurance, and it only pays off after you’re dead!!