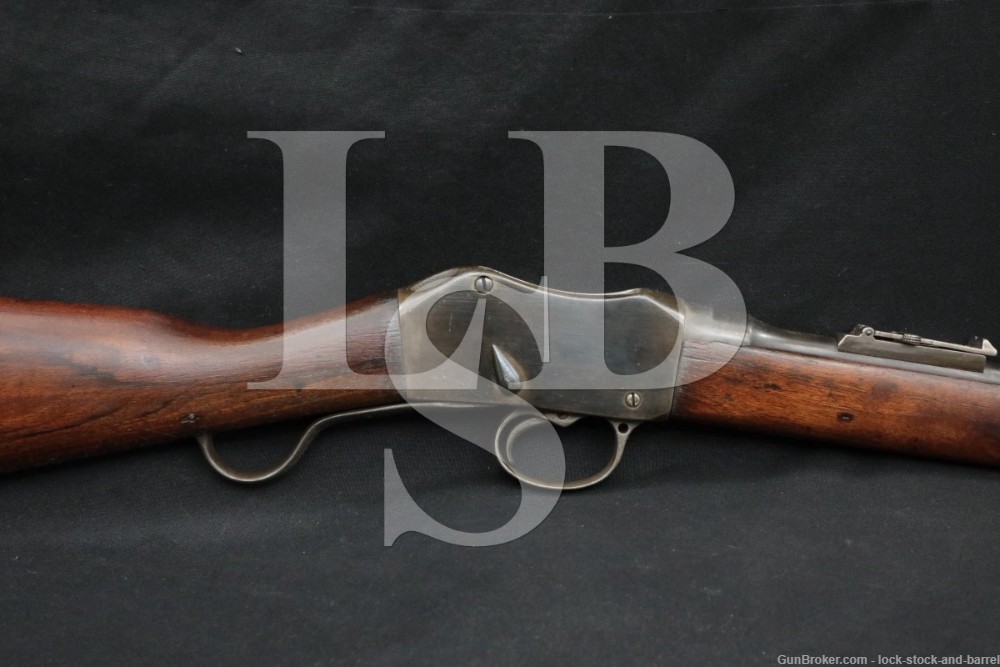 Make: Converted by the Citadel in Cairo, Egypt. The original maker’s markings on the receiver have been removed.

Year of Manufacture: Converted 1905, we do not know when the receiver was originally made.

Markings: There is no visible import mark. The left of the receiver is marked with an Egyptian star over a crescent and “CITADEL / 1905”. The left of the knoxform has British proof marks, the left-front of the receiver has opposing broad arrows, and the top of the barrel has an “E” on the flat with arabic markings. There are British proof marks on the bottom of the trigger guard and lever.

Sights / Optics: The front sight is a blade integral to a base with protective ears fixed to the front of the barrel. The rear sight is a folding ladder-style sight, presenting a “V”-notch when folded down and having a “V”-notch on the slider and a shallow notch at the top of the ladder for use when folded up.

Stock Configuration & Condition: The stocks are two-piece smooth wood with a nosecap, two barrel bands, sling stud in the belly, straight wrist, straight comb, brass marking disc in the right of the stock, and steel buttplate. The forward barrel band and trigger guard have provision for sling swivels, but no swivels are present. The stocks have some scattered nicks, dings and scratches, most are finished over. The right of the forend has what appears to be a more notable gouge. Based on the surrounding wood grain, we believe this is a loss due to a knot in the wood. There are some scattered small losses at edges and there are a couple of cracks at the right-rear of the forend. The LOP measures 14 1/4″ from the front of the trigger to the back of the buttplate. The plate has mostly worn to white, showing treatment with cold blue, erosion at the heel and toe, and faint hand-writing in marker. Overall, the stocks are in Good condition as refinished and/or not original to the gun.

Bore Condition: The bore is light gray. The rifling is well defined, generally sharp. There is scattered light erosion in the bore.

Overall Condition: This rifle retains about 70% of its current metal finish. The new finish is mottled, with worn areas showing treatment with cold blue. The most notable wear is at the muzzle-end of the barrel, the top and bottom of the receiver, with wear at the edges. There is scattered light erosion under the finish. There are some scattered light nicks, scuffs and scratches. The action shows operational wear. The screw heads show use with serviceable slots. The markings range from clear to worn and incomplete, some of the original British markings were intentionally removed. Overall, this rifle rates in Good condition as refinished.

Our Assessment: This rifle was converted to its current configuration at the Citadel in Cairo, Egypt. Its original receiver markings have been more thoroughly removed than most of the Citadel carbines we’ve seen, so we don’t know what configuration it was in before it had its current .303 Enfield rifled barrel installed. It has a surprisingly nice bore given that this rifle was converted more than a century ago. It could be a fun little shooter. This is one of the last Martini pattern rifles to serve the British Empire and it will add nicely to a British or Egyptian arms collection. Please see our photos and good luck!