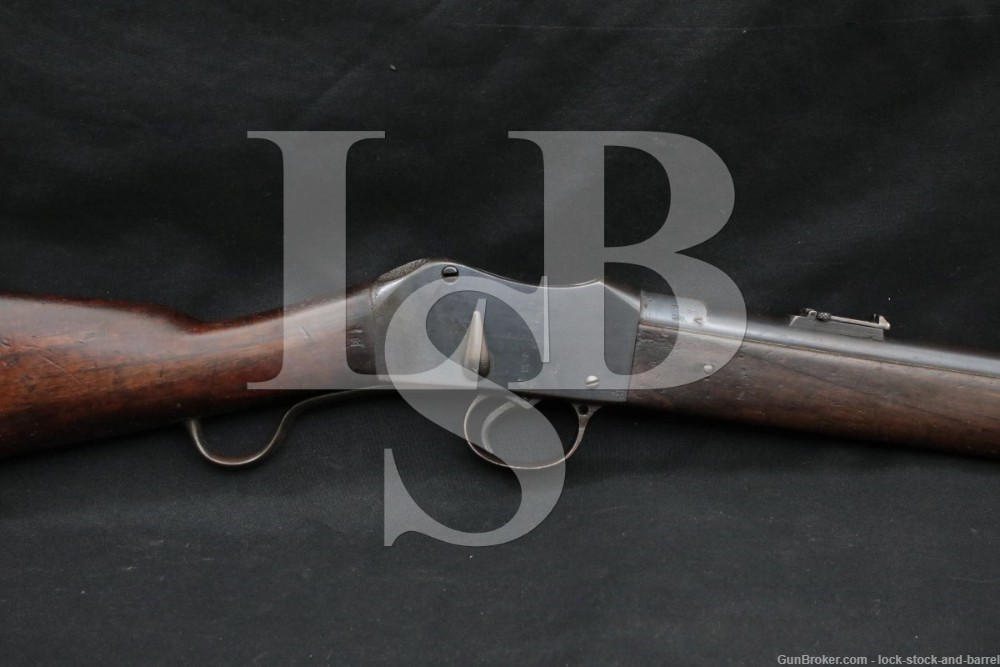 Markings: The right side of the receiver is marked with crown over “V.R / ENFIELD / 1872”, crowned broad arrow and “II.”. There are a series of British proof marks on the barrel, receiver, barrel bands, guard and lever. The left of the barrel and receiver have opposing broad-arrow marks. The top of the chamber ring is marked “S-X”. The top of the knox, right of the forend and right of the wrist each have a double “R” monogram. The right of the stock has an Enfield cartouche and a brass disc marked “1 / 1894 / V / 1CLL.A / 713”.

Sights / Optics: The front sight is a blade integral to a base fixed to the front of the barrel. The rear sight is a “V” notched sight escalator when down. When flipped up it becomes a sight ladder that uses a separate sliding “V” notched blade. The ladder is marked from “6 – 10”, the left of the base is marked from “100-300”. There is a small notch at the top of the ladder.

Stock Configuration & Condition: The two piece hardwood stock has a straight grip, metal nosecap, barrel band with bayonet lug and sling swivel, a second barrel band, sling swivel in the belly, a brass disk on the right of the buttstock, a metal buttplate, and a metal insert to catch the end of the lever. The stocks have several scattered nicks, scuffs and scratches. There are a couple of small fills on the left of the forend between the barrel bands. The buttstock has been repaired with a 1 1/2″ thick piece at the rear. The stocks have scattered discoloration. The LOP measures 13 3/4 inches from the front of the trigger to the back of the buttplate. The plate has gone to a light-moderate patina with light wear, mostly around the edges, and some erosion. The stocks rate in Good-Very Good overall condition as refinished and repaired Antique.

Finish Originality: The finish appears original to the conversion.

Bore Condition: The bore is semi-bright with well defined Henry-style rifling. There is some scattered light erosion in the bore with some light pitting toward the muzzle-end.

Overall Condition: This rifle retains about 80% of its metal finish. The finish is thinning at all edges. There is some scattered light surface oxidation. The top of the barrel has some wear with the worn area gone to a light patina. There are some patches of surface erosion. The guard and lever show wear, some areas on the lever may have been touched-up with cold blue. There are some scattered light nicks, scuffs and scratches. The action shows operational wear. The screw heads show use with serviceable slots. The markings range from clear to worn, but legible. Overall, this rifle rates in Very Good-Fine condition as converted and Antique.

Our Assessment: This beautiful Martini-Henry Carbine MK II was originally made as a Mark II Rifle by the Royal Small Arms Factory (RSAF) Enfield back in 1872, updated to the Mark II pattern and then was converted to its current configuration in the 1890s. These rifles were originally intended for use by Garrison and Volunteer artillery units. The rifle is in great condition considering its age, and appears to still have the blue finish applied when it was converted. It will add nicely to a British arms collection. Please see our photos and good luck!