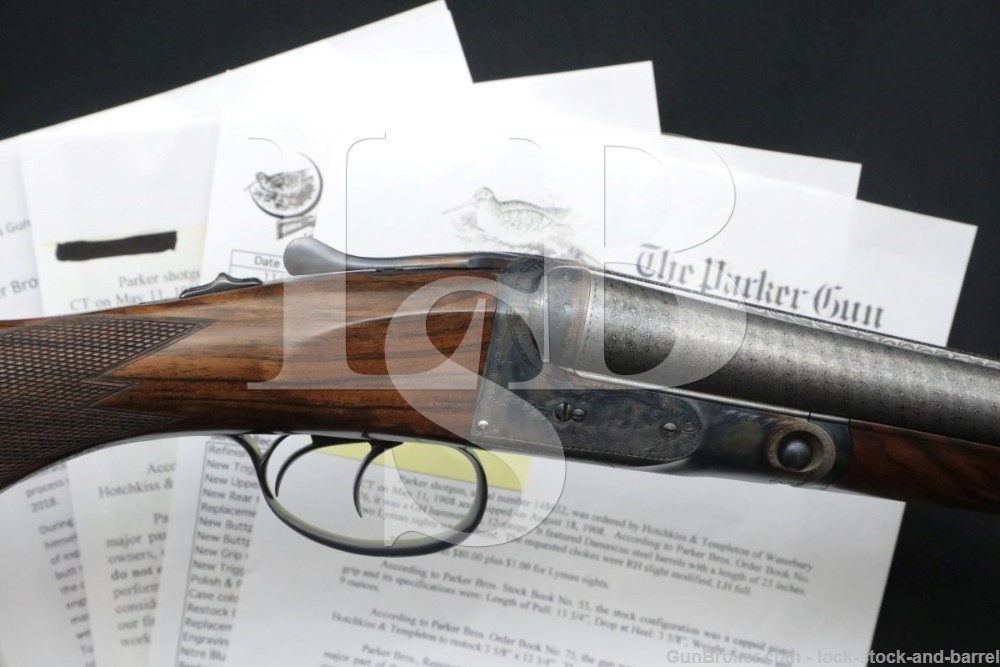 Gauge: 12 Gauge. The chambers have been lengthened for use with 2 3/4″ shells, but a qualified gunsmith should be consulted to determine what loads are safe to fire in this gun.

Stock Configuration & Condition: The stocks are two-piece checkered walnut with splinter forend, capped pistol grip, initial plate inlaid to the belly, straight comb and checkered black hard rubber Parker Bros buttplate with Dog scene. The forend has an inlaid steel tip. The stocks have no notable wear or damage, only light handling marks. The checkering is sharp. There are no chips or cracks. The drop at comb is approximately 1 1/2″, drop at heel 2 1/2″. The cast is about neutral. LOP measures 14″ and 13 1/8″ from the fronts of the triggers to the back of the buttplate. The plate has minor wear with good detail in the dog and generally well defined checkering. Overall, the stocks are in Excellent condition as not original to the gun. The gun was re-stocked by Brian Dudley and is currently featured on his website.

Finish Originality: Per the Brian Dudley’s website, this shotgun was restored with metal prep and nitre bluing performed by Dudley, the barrels were refinished by Dale Edmonds and the case color was done by Doug Turnbull. Where necessary, the engraving was re-cut by Geoffroy Gournet.

Bore Condition: The bores are mostly bright. There is some minor erosion in the bores and infrequent minor pitting. The bores appear to have had a few dents pressed out.

The consignor provided minimum barrel wall thickness measurements. We have not measured the wall thickness and these figures should be confirmed prior to firing: Left- 0.035″, Right- 0.038″

Overall Condition: This shotgun retains about 96% of its metal finish. The barrels have generally strong damascus patterning with some scattered minor thinning, mostly toward the muzzle-end. The receiver has strong, vibrant case color. The guard has strong blue finish. There is infrequent minor erosion under the finish, most notable on the forend latch plate. The action has operational wear. The screw heads are sharp. The markings are clear. Overall, this shotgun is in Excellent condition as restored.

Box, Paperwork & Accessories: This shotgun comes with a Parker Gun Collectors Association letter which confirms that this shotgun was ordered by Hotchkiss & Templeton of Waterbury, CT on May 11, 1908 and shipped August 18, 1908 as a GH Hammerless 12 GA with 25″ Damascus barrels choked Full and Slight Modified. The gun was returned to Parker Bros. on August 20, 1908 by Hotchkiss & Templeton to restock. A copy of Brian M. Dudley’s repair invoice is included as well as a note from the consignor detailing the history of the gun and the work performed.

Our Assessment: This Parker Brothers GH Grade Hammerless comes to us from 1908. The GH Grade filled a gap between the lower grade or “knockabout” guns and the higher grade or “fine” guns, offering a finer quality fit and finish, engraving and style in a gun which could still be taken to the field without feeling like you’re ruining a presentation piece. This example is a quite rare variant with factory 25″ barrels. In Grade 2, including both EH and GH grades, only four guns were made with 25″ barrels, only three of which were 12 Gauge. The gun has been expertly restored by a who’s who of master craftsmen. The wood, nitre blue and metal prep was performed by Brian M. Dudley, who sent the barrels to Dale Edmonds, the parts which required case color to Doug Turnbull, and had the engraving restored by Geoffroy Gournet. Dale Edmonds was considered one of the best at refinishing damascus barrels, and according to the consignor this was one of the last barrel sets Edmonds worked on before his retirement. Doug Turnbull has long been known as a master of case hardening, and his expertise clearly shows in the vibrant coloring of the receiver and forend hardware. Goeffroy Gournet is possibly the best engraver for the job, as he was the master engraver for Parker Reproductions and so not only has the skill, but great experience with Parker’s engraving style. The extremely skilled work of these masters of their trades has yielded a Parker which is not only drop-dead gorgeous, but also an extremely rare example of the Parker GH gun. In addition to its exquisite appearance, it is a wonderful field gun, with its 25″ barrels making the gun fast-handling and its light weight, under seven pounds, making for a gun that won’t wear you out if you carry it all day. After consulting with a qualified gunsmith to ensure which loads are safe for use, the discerning sportsman could be forgiven for returning this gun to the field to drop some more birds. Famous users of Parker Bros. shotguns include Annie Oakley, John Phillip Sousa, and Clark Gable, so you’d be in good company if you owned this firearm. Please see our photos and good luck!